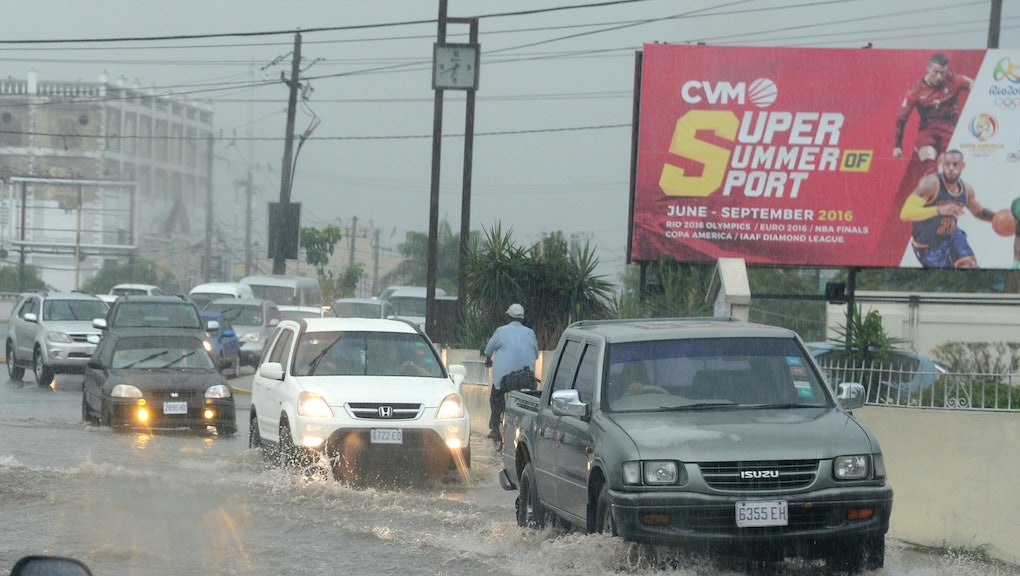 Early Monday morning, Hurricane Matthew came to the Caribbean, and with it, tropical storm power we haven't seen in the area since 2007.

At 5 a.m. Eastern, Matthew was a Category 4 hurricane, with 130-mile-per-hour winds a couple hundred miles from Kingston, Jamaica, according to NBC News. Before Matthew leaves the region — which include Jamaica, Cuba and the Bahamas — it's expected to hit Haiti with 40 inches of rain in some isolated spots and 25 inches everywhere else.

"This is shaping up to be a devastating blow, especially to places like Haiti and Cuba," meteorologist Domenica Davis told NBC News.

For comparison, the recent floods in Louisiana were the result of less than two feet of rain. Haitian rescue teams are already evacuating residents from islands off the mainland, according to NBC News. The Weather Channel called the hit "potentially catastrophic."

Twitter users have already started posting results of the storm in Jamaica.

The Caribbean islands will feel the full strength of Matthew no matter what. But the unexpected part about the hurricane is how it doesn't seem to be letting up — and what that means for the U.S.

"It's kind of a resilient hurricane — it hasn't really wavered much in terms of its strength," the Weather Channel's Michael Lowry said, according to NBC News. "It's a little bit unusual to go 48 hours with a Category 4 or 5 hurricane and not to see some sort of fluctuation."

The storm's indefatigability has Florida Gov. Rick Scott calling for residents to batten down the hatches just in case Matthew should head north of the Caribbean and wind up just east of Florida's coast.

"This storm is catastrophic, and if it hits our state, we could see impacts that we have not seen in many years," Scott said, according to Miami's NBC 6. "Make sure to have three days of food and water, flashlights, batteries and a battery-powered radio."