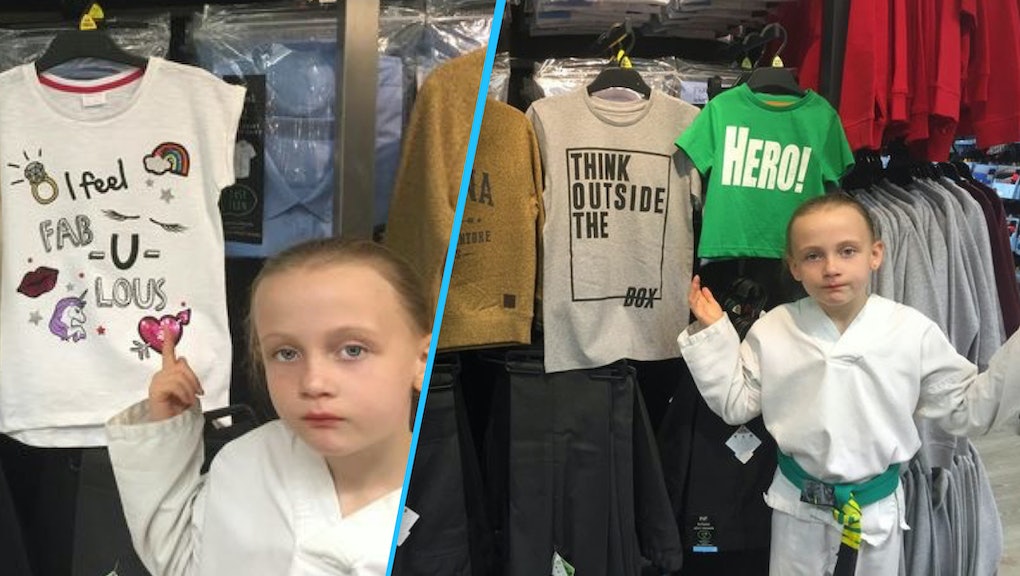 Here, let this wise 8-year-old tell you why gendered clothing is the worst

Sure, some kids may say the darndest things — but sometimes they say what we've all been thinking.

In a video that has now gone viral with more than 1 million views, 8-year-old Daisy Edmonds is seen walking around the U.K. chain Tesco with a mission: To call out the sexism behind the T-shirts that are sold to girls like her.

"What do you think of the clothes on offer today?" her mother asks in the video, before Edmonds becomes perhaps the world's youngest gender studies professor.

And what does Edmonds have to say about that?

"It's unfair because everyone thinks that girls should just be pretty, and boys should just be adventurous," Edmonds says. "I think that's wrong because why should boys and girls clothes even be separated? Because we're just as good as each other."

Although that's an obvious concept for Edmonds, many stores are struggling with the idea that there's really no good reason not to have similar designs for boys and girls clothing. Just recently, Old Navy was called out for selling Ghosbusters T-shirts to boys while selling "Ghostbuster-in-training" T-shirts to girls. And over in Australia, Target was also slammed for selling a pink Batgirl T-shirt with a list of tasks for girls, which included lots of cleaning.

But as Edmonds said, "We're just as good as each other," so why any separation at all?

Later in the video, Edmonds further elaborates on why the T-shirts in the girls section are so offensive. "'Think outside the box,'" she says, pointing to the T-shirt in the boys section. "What does this mean? It means go on your adventures. Let nothing stop you. Go for your own dreams."

"Boys get 'think outside the box,' which means be adventurous, go for your dreams," she adds, before going back to the girls' "hey" T-shirt and asking, "What does it inspire you to do?"

After her lecture is said and done, Edmonds takes matters into her own hands and puts some of the T-shirts that were hanging in the boys section back into the girls.

In an interview with the Mirror, Edmonds' mother, Becky, who filmed the video, said, "Daisy doesn't understand why there has to be separation. It's the same with toys. ... She thinks they should have unisex clothing. She should be able to choose what she wears. Who are Tesco to tell them what they can and can't wear?"

And in response, a spokesperson for Tesco had this to say: "We stock a wide variety of clothes suitable for girls and boys and listen to the views of our customers when reviewing our range. We'd like to thank Daisy for her feedback and we can assure her that new styles will be arriving in stores shortly."

So, although what Edmonds did was just a small act in the spirit of gender equality in fashion, it comes at a time when fashion is starting to agree with her, with stores like Target in the United States vowing not to label its toys by gender.

So, Daisy Edmonds, this is just the beginning.

You can watch the entire video below.