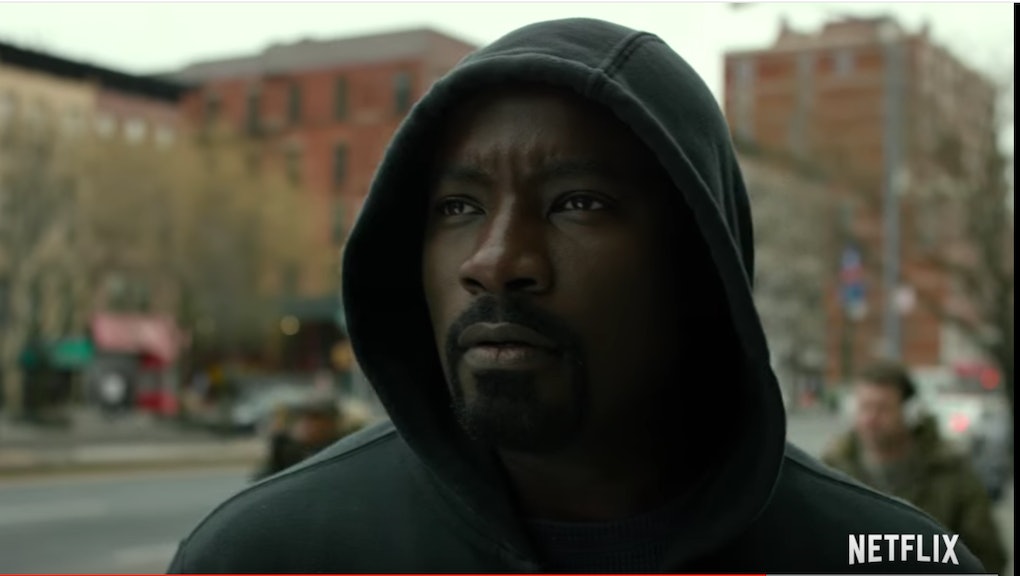 Harlem kingpin Cornell "Cottonmouth" Stokes' gun-toting henchman is consigned to his fate when he sees Luke Cage approach him at a park. He's dealt with Cage enough to know he's unstoppable — but still he holds his ground. Then, as Cage lifts him in the air, he gets an unexpected history lesson.

"Think about where you are," Cage tells him. "Hallowed ground. This park is named after Jackie Robinson. Take a look around."

The titular hero in Luke Cage, Marvel's latest Netflix series, devotes a few monologues to important black figures. When a gun's pointed to his head in another episode, he laments that this is being done in front of a building named for Crispus Attucks, the first man to die in the Revolutionary War. The series' repeated references to real-life black heroes makes for poignant commentary: We need a hero like Luke Cage more than ever in 2016.

(Editor's note: Spoilers for Luke Cage season one ahead).

The importance of Cage's superpower and appearance is timeless: He's bulletproof, and his outfit of choice is a black hoodie. It's an intentional Trayvon Martin reference, according to Cage portrayer Mike Colter.

"It's a nod to Trayvon, no question," Colter told the Huffington Post. "Trayvon Martin and people like him. People like Jordan Davis, a kid who was shot because of the perception that he was a danger. When you're a black man in a hoodie all of a sudden you're a criminal."

This is exemplified in the series' final third, in which Diamondback — another of the show's antagonists, as well as Cage's half-brother — frames Cage for the murder of a cop. As a result, despite evidence of Cage not committing the crime, the police go on a fervent manhunt for the hero. Thanks to Diamondback, they're even equipped with bullets designed to pierce Cage's skin and potentially kill him.

But the streets of Harlem, for the most part, have Cage's back. In a chance encounter at a bodega, Cage subdues a couple of robbers and meets the Wu-Tang Clan's Method Man. Afterwards, Method Man goes on the radio to spit a few verses in a tribute to Harlem's hero, titled "Bulletproof Love."

Lyrics like "And the cops got it wrong, We don't think Cage involved/ Look, dog, a hero never had one/ Already took Malcolm and Martin this is the last one" score scenes of black men across Harlem wearing bullet-riddled hoodies in solidarity with Cage. The show eloquently ties its hero's fictional peril to the real-life dangers facing black men.

While Luke Cage showrunner Cheo Hodari Coker said he doesn't want the series to be a "Black Lives Matter show," it's a narrative that ultimately gives it weight. This helps, too, when the series experiences the same pitfalls as Netflix's other Marvel entries.

Like Jessica Jones and Daredevil before it, Luke Cage suffers from its 13-episode run. There's simply not enough of a story, especially when it introduces Diamondback in place of a murdered Cottonmouth. But Luke Cage doesn't have to be perfect to be an important show in 2016. The repeated imagery of Cage deflecting bullets — black hoodie and all — sends a powerful message in and of itself.