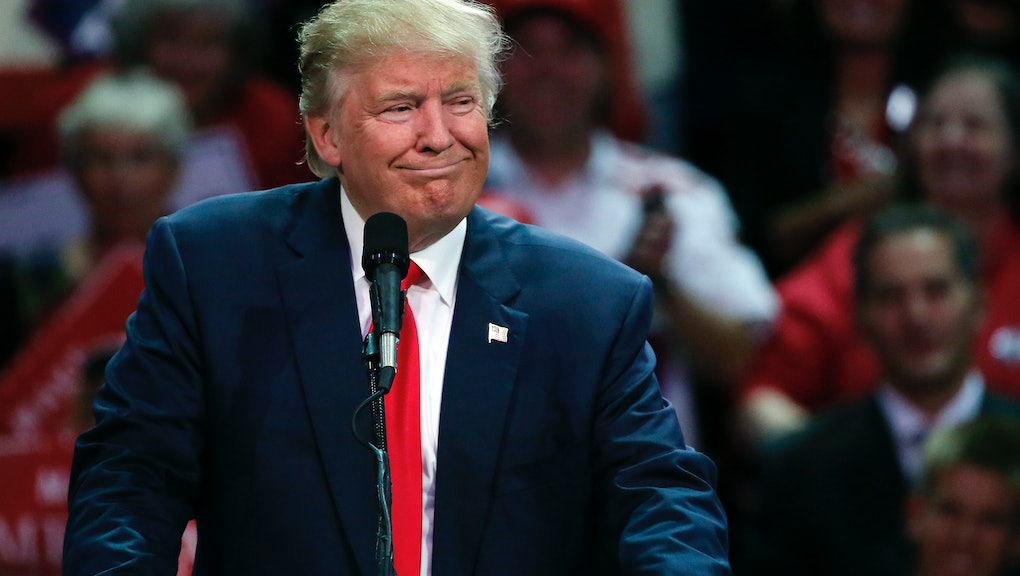 After Trump’s tax leak, here's why conservative arguments against welfare are hypocritical

Conservatives have a long history of claiming the United States spends "trillions" on welfare, as well as knocking welfare recipients for being too "dependent" on the government.

Republican presidential nominee Donald Trump has made comments to this effect before. In a June interview with Fox News anchor Sean Hannity, Trump said welfare, food stamps and other government assistance is "unfair" to the 50% of the population he said "cannot carry the other 50%."

But if Trump has indeed avoided paying taxes for nearly two decades, it seems he's not "carrying" anyone. Records obtained by the New York Times — and shared with the public on Saturday — show Trump may have escaped paying income taxes for up to 18 years after declaring a $916 million loss on his 1995 tax returns.

Some have speculated the release of Trump's tax forms could be his "47% moment" — referring to infamous comments former Republican presidential nominee Mitt Romney made during the 2012 election, claiming the voters who supported President Barack Obama at the time were "people who pay no income tax."

Trump, it seems, could be one of these people.

How Trump may have gotten away with not paying taxes

To be clear, Trump's actions were completely kosher: As Mic reported on Monday, "That's because of Internal Revenue Service provisions that allow certain taxpayers to 'carry' losses both forward and backward in time, canceling out tax obligations." In other words, the government gives these taxpayers a future freebie to make up for their business' profit losses.

But if taking advantage of a legal tax loophole — which can be a huge help to billionaire businessmen like Trump — is "smart," even "genius," then why are welfare recipients seen as cheating the system?

According to a basic income tax calculator, someone who makes $50 million annually, as Trump does, would fall into the highest income tax bracket, paying 39.6% in income tax. In ideal conditions — not taking into account any tax credits or exemptions — someone who earns that much in a year would pay roughly $19.7 million in taxes. Of course, someone who earns that big of an annual salary would have plenty of other tax-planning opportunities that could help reduce that sum — a hedge fund manager, for example, is allowed to have their income taxed at the much lower capital gain rate.

But all stipulations aside, in 18 years, Trump theoretically could have owed $354.6 million in income tax.

Welfare recipients, in comparison, earn about $25 a day, totaling to just over $9,000 a year. If someone received government assistance for 18 consecutive years (which is unheard of, if not altogether impossible) it would amount to $162,000 — still just a dent in the $354.6 million Trump theoretically withheld from the U.S. government.

Welfare recipients are almost universally required to work while receiving government aid. Temporary Assistance for Needy Families, the grant that helps fund individual states' welfare programs, mandates that recipients find work within two years of receiving aid, "including single parents who are required to work at least 30 hours per week opposed to 35 or 55 required by two parent families," according to Welfare Info.

Trump has also claimed that undocumented immigrants receive more welfare money than citizens. In May, Trump wrote in a Facebook post accompanied by a story shared from the Washington Examiner, "When illegal immigrant households receive far more in federal welfare benefits than native American households, there is something CLEARLY WRONG with the system!"

"It's illegal to afford public benefits of the TANF or food stamp variety to undocumented immigrants ... who have not been in this country for a situated amount of time as legal residents," said Mink.

Medicaid remains the only government program undocumented immigrants can use, according to Everyday Feminism, and most of it goes directly to hospitals to pay for emergency care.

"They pay their taxes," Voto Latino president and CEO Maria Teresa Kumar said on Meet the Press on Sunday. "They have skin in the game."

According to Kumar, Trump does not. "He is not contributing to a system that he says he's going to go in and fix," she said.