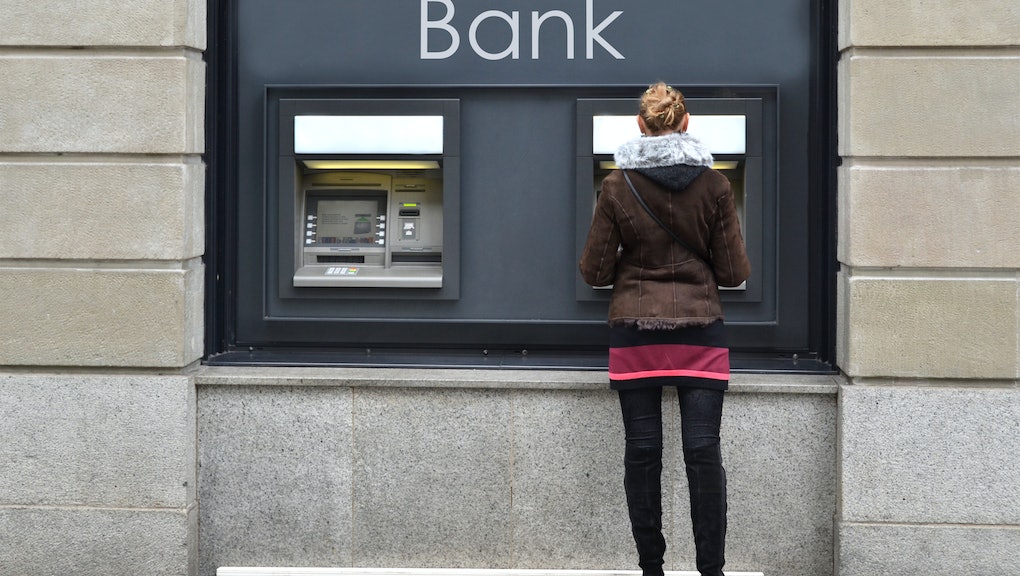 Out-of-network ATM fees have reached a record high for the tenth year in a row, according to Bankrate's 2016 checking account survey published Tuesday.

In fact, nearly half of U.S. respondents in another recent study from TransferWise pointed to ATM charges as the most "unfair" bank fee, according to MarketWatch.

Overdraft fees also remain high, averaging about $33 today, according to the Bankrate report. Consumers get charged this fee when they accidentally withdraw more than they have in their account.

When you add up all different kinds of bank fees (including account maintenance and other charges that can sneak up on you), data from TransferWise shows U.S. households each pay nearly $300 total every year.

That's a lot of money — and no accident.

Banks really benefit from our confusion over fine print and nuanced rules of service: In 2015, the three biggest banks alone — Wells Fargo, JPMorgan Chase and Bank of America — made a whopping $6 billion off of ATM and overdraft fees, according to CNNMoney.

Now, of course, if you realize you're getting fleeced, you can always switch banks. Try a bank that skips overdraft fees or reimburses ATM charges: Some accounts with Charles Schwab, PNC, Aspiration, and Ally (to name just a few examples) offer out-of-network ATM reimbursements.

Or you can suck it up and plan ATM visits in advance — so you're using your bank's ATM for free instead of that sketchy machine at the bar.

"The fees are avoidable," CFA Greg McBride of Bankrate said in a phone interview. "As a consumer, you've got to be vigilant ... just don't be sloppy enough to pay the fees in the first place."

But there's a big problem with these options — at least for certain Americans. Haggling with or switching banks requires that you have time to spare, that you are well-informed and that you even have a bank account in the first place.

For a host of reasons — including a fear of unpredictable charges, like overdraft fees — 15% of U.S. consumers are "underbanked," or lack a bank account.

In fact, even though alternative financial services, like payday lenders, may be predatory and mire low-income Americans in debt, it turns out banks can be just as bad for disadvantaged people.

After working as a check casher for four months to better understand why the poor are often underbanked, New School professor Lisa Servon wrote in the New Yorker:

"It turns out banks are often costlier for the poor than check cashers and other alternative services ... Many of the customers we interviewed told us that a lack of transparency at banks contributed to the costs they incurred; they found it difficult to predict when and what they would be charged."

Furthermore, since ATM fees are flat — aka not proportional to the withdrawal amount — people making smaller withdrawals are effectively paying a higher penalty than someone withdrawing a larger sum, said McBride.

"When it comes to ATM fees, low-income consumers are paying a larger share of their income or the money they happen to have in banks," said Sanjay Reddy, associate professor of economics at the New School for Social Research, in an interview.

Reddy also points to confusion as a big source of the problem: Consumers "end up paying banking fees and then don't fight about it because the bank is not transparent in the first place," he said.

These problems are not new. Even 20 years ago, Vermont Sen. Bernie Sanders was working to tamp down on ATM fees.

"They're being charged $2 or $3 or maybe more to get $20 of their own money out of a bank, and frankly ... That is an outrage, that is a consumer ripoff," Sanders said in 1996, during a House Banking Committee hearing.

Not only are high ATM fees bad news for consumers, Sanders argued, but they also trap consumers in big banks: Since smaller banks and credit unions can't afford to put up as many ATMs as larger banks, the threat of ATM fees will push consumers toward bigger banks with lots of ATM locations.

But what can be done? Despite tighter rules introduced in 2010 designed to prevent overdraft charges without consent, banks are still making billions on overdraft fees.

"This points to the need for better consumer protection and vigilance on the part of government bodies," Reddy said. "It might mean politicizing it in order to produce action. The only way you'll have vigilance is with a counter-power [to the banks]."

Luckily, there are some signs of progress: the Consumer Financial Protection Bureau introduced rules Wednesday that extend overdraft regulations to prepaid cards.

As for sky-high ATM fees? At least for now, avoiding them is all on you.