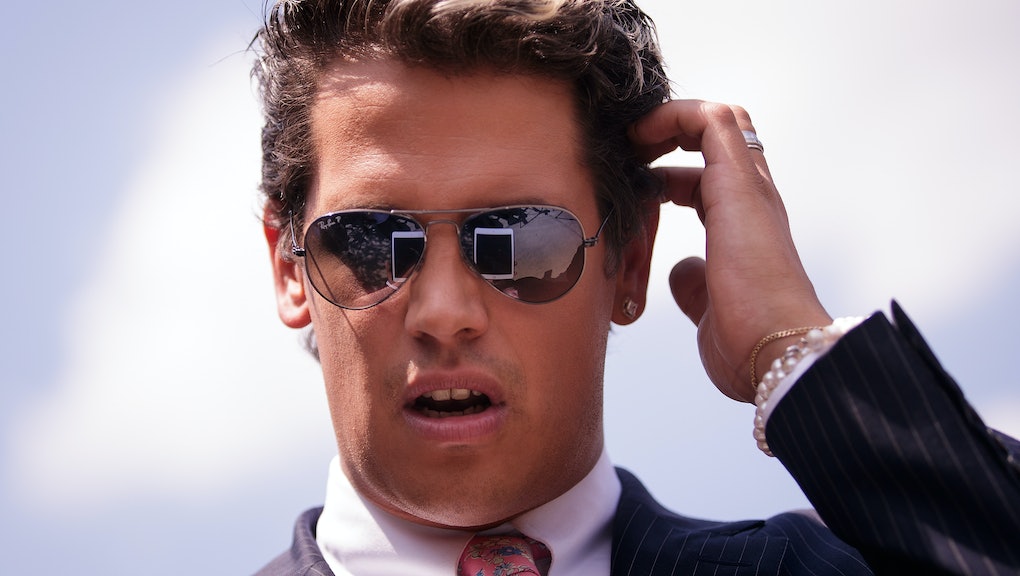 One featured artist at the event is alt-right celebrity and white-nationalist demagogue Milo Yiannopoulos. The exhibition is called #DaddyWillSaveUs — a reference to Yiannopoulos' pet name for the Republican presidential candidate.

The host of the show is conservative photographer Lucian Wintrich, who is known for creating the Twinks4Trump photo series depicting young gay men in pro-Trump garb. Thirty percent of the proceeds from the event were meant to go to the American Military Partners Association, the leading support network for families of LGBTQ veterans.

No thanks, says the AMPA.

Ashley Broadway-Mack, the president of the group, said that the group would reject the money. "Based upon what we know, this is not something we'd be able to accept," she said in an email.

Wintrich and Yiannopoulos did not respond to Mic's request for comment.

The photo series Twinks4Trump debuted at the anti-Islam Gays for Trump event at the Republican National Convention.

Just this week, the AMPA took a strong stance for the rights of transgender veterans and their access to health services, saying that transgender veterans "have served this great country with pride and in every conflict in our nation's history — yet they are left fighting an uphill battle."

Yiannopoulos, by contrast, has called transgender people "fucking terrifying": "You really expect me to believe that I shouldn't laugh about trannies?" he said in a profile in Out magazine. "It's hilarious. Like, dude thinks he's a woman?"

Yiannopoulos has also said that "feminism is cancer" and has argued that same-sex marriage is harmful to the LGBTQ community.

In addition to Yiannopoulos, the show will feature art from pharmaceutical entrepreneur Martin Shkreli, famous for driving up the price of HIV drug Daraprim from $13.50 to $750 per pill, as well as Vice

Wintrich, a photographer who claims he was fired from his job in marketing for supporting Trump, is frequently criticized for backing the GOP candidate.

"Gay people do not speak with a single voice," Wintrich wrote for the Advocate. "We are like any other subset of society, a collection of voices with a vast diversity of opinion. There is no single set gay platform or ideology. To suggest otherwise is patronizing."