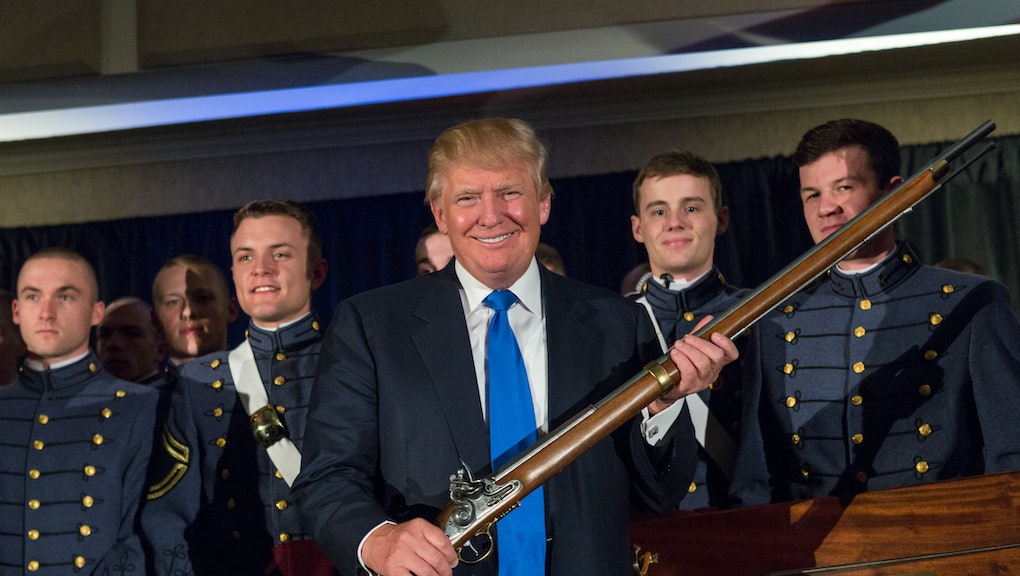 Speaking at a Q-and-A session hosted by the Retired American Warriors in Herndon, Virginia, on Monday, Trump — who has never served in the military — told a crowd of former service members that they were "strong" compared to other, presumably weaker veterans, who "can't handle" the brutality of fighting on the front lines.

"When people come back from war and combat and they see things that maybe what the people in this room have seen many times over, and you're strong and you can handle it, but a lot of people can't handle it," Trump said, in a bizarre jab that seemed to many to be directed at veterans with PTSD.

Trump's comments immediately spurred responses from veterans and civilians alike, who criticized his apparent dismissal of people with PTSD.

This latest blunder, said in front of a crowd of military vets, is cringeworthy and baffling — but just another entry in a series of statements he's made denigrating current and former service members.

After Arizona Sen. John McCain said in a 2015 interview that Trump's candidacy "fired up the crazies" and criticized his hyperbolic, racist rhetoric, Trump fired back — by attacking McCain for his capture and torture as a Vietnam prisoner of war.

"He's a war hero because he was captured. I like people who weren't captured," Trump told a crowd at the Family Leadership Summit in Ames, Iowa, back in July 2015.

In 1967, while serving in Vietnam as a Navy pilot, McCain's aircraft was shot down by enemy forces. He was imprisoned by the Viet Cong for more than five years, tortured by North Vietnamese intelligence officials. During that period, McCain said he experienced suicidal thoughts.

After mocking McCain for being captured, Trump doubled down and refused to apologize.

One of the most talked-about speeches from the 2016 Democratic National Convention was the one delivered by Khizr Khan, father of Army Capt. Humayun Khan, killed while serving in Iraq in 2004 at the age of 27. Khan spoke about his son, who was Muslim, and criticized Trump's anti-Muslim rhetoric.

At one point in his speech, Khan addressed Trump directly, saying "Donald Trump, you are asking Americans to trust you with their future. Let me ask you, have you even read the United States Constitution? I will gladly lend you my copy."

Trump snapped back at the Khans, insinuating during an interview with ABC, that Ghazala Khan didn't speak at the DNC because she "wasn't allowed" and questioned whether Khan's speech was written by "Hillary's scriptwriters."

Ghazala Khan responded to Trump's attacks, writing in a piece in the Washington Post and saying that "without saying a thing, all the world, all America, felt my pain. I am a Gold Star mother. Whoever saw me felt me in their heart." Speaking about her son, she wrote, is "hard ... all the time."

Trump also released an official statement after Khan's speech that both praised the service of the younger Khan and attacked his grieving family. It said, in part, "While I feel deeply for the loss of his son, Mr. Khan, who has never met me, has no right to stand in front of millions of people and claim I have never read the Constitution, (which is false) and say many other inaccurate things. If I become president, I will make America safe again."

"I always wanted to get the Purple Heart. This was much easier."

During a Trump rally in Ashburn, Virginia, the candidate took the stage and told the crowd that a supporter had just given him a Purple Heart, an honor bestowed upon service members who are wounded or killed while serving. The man who gave Trump his Purple Heart, Politico reported, was retired Lt. Col. Louis Dorfman, who was wounded in Iraq in 2007.

"I said, 'Man, that's like big stuff. I always wanted to get the Purple Heart," Trump joked when he told the crowd in Virginia that he had just been gifted a Purple Heart. "This was much easier."

Trump's comments struck many as insensitive — especially Cameron Kerr, an Army veteran who earned his own Purple Heart after losing a leg while serving in Afghanistan. Kerr launched a GoFundMe page to "help Trump get a Purple Heart," with the sarcastic goal of flying Trump out "to the conflict zone of his choosing." Kerr raised more than $66,000 which he promised to donate to various aid agencies assisting refugees.

While Trump heading to the front lines isn't a likely outcome, perhaps a little more face time with men and women in uniform is in order.