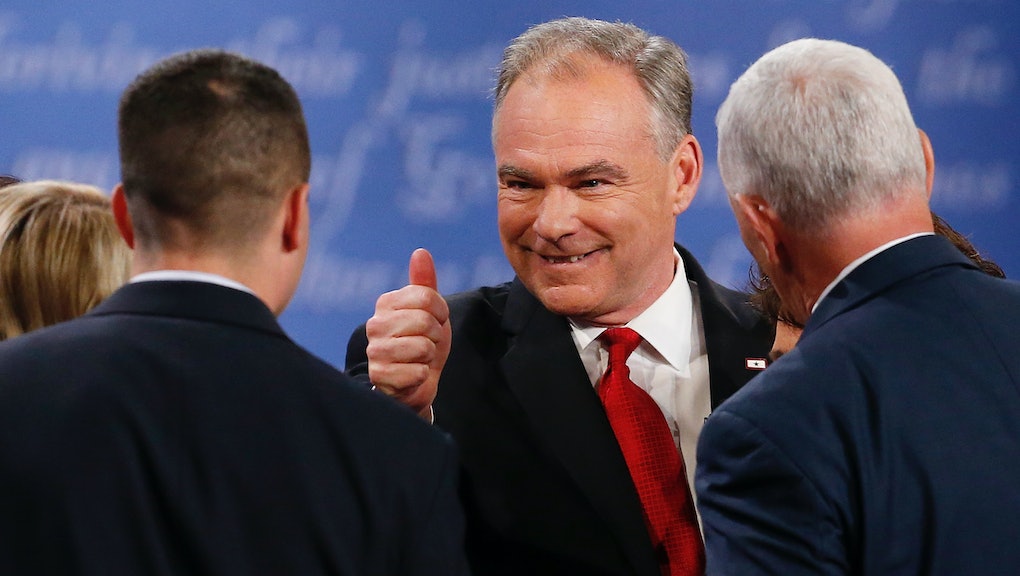 Many things were said during Tuesday night's vice presidential debate, some of them true, some of them patently not. Political rivals Democrat Tim Kaine and Republican Mike Pence were reasonably cordial, but also, hell-bent on proving the other to be untrustworthy and unelectable.

Both candidates toyed with hyperbole at times, but how much did Kaine stray from the truth? We've checked some of his more questionable moments below.

Did Donald Trump say that more countries should have nuclear weapons?

Mostly true: At the debate, the Virginia Sen. challenged Pence to "try to defend" Trump's assertion that "more nations should have nuclear weapons." Pence's response? "He never said that."

PolitiFact rates Pence's statement mostly false, making Kaine's mostly true. On various occasions, Trump has named each of those countries as candidates for more nukes, arguing that if their threatening neighbors (North Korea, for example) have these weapons, then Saudi Arabia, South Korea and Japan should have them, too, but for their own safety.

Trump's stance seems to be less "nukes for everyone" and more "nukes for precariously located countries," but what it boils down to is a belief, which Trump has voiced, that more countries should have nuclear weapons.

Does Trump have business links to Russia?

True. "It's clear that [Trump] has business dealings with Russian oligarchs who are very connected to Putin," Kaine said, responding to Pence's assertion that President Barack Obama and Clinton had not stood up to Russia as Trump would.

The Republican nominee has asserted that he has "zero investments in Russia," but according to Time, that's not quite true: While Trump has not succeeded in constructing a building in the Kremlin, "several of Trump's businesses outside of Russia are entangled with Russian financiers inside Putin's circle." The Los Angeles Times, the New York Times, the Washington Post and many other media outlets have reported that the Trump organization maintains ties with Russia.

Did Pence say Vladimir Putin is a better leader than Barack Obama?

Mostly true: "You both have said Vladimir Putin is a better leader than the president," Kaine asserted, referring to Trump and Pence.

The Indiana governor corrected Kaine, saying the word used was "stronger" — and indeed it was.

"I think it's inarguable that Vladimir Putin has been a stronger leader in his country than Barack Obama has been in this country," Pence told CNN's Dana Bash in early September.

This one comes down to semantics — whether Pence's definition of strength makes for better leadership. Pence told Bash that bold presidential action was a more effective form of leadership, intimating that Obama had not acted boldly but that Trump would. In this context, "stronger" seems to imply "better."

True... ish. "We [Clinton and Kaine] will never, ever engage in a risky scheme to privatize Social Security. Donald Trump wrote a book and he said Social Security is a Ponzi scheme and privatization would be good for all of us," Kaine said.

Pence shot back that the only thing he and his running mate had said on that matter was "we're going to meet our obligations to our seniors."

As a congressman, however, Pence rallied for President George W. Bush's Social Security privatization plan, the record to which Kaine referred when he called Pence "the chief cheerleader" for privatization.

It's true that Pence has advocated for social security privatization. As far as Trump goes, though, his stance on Social Security since writing the aforementioned book has changed, and he has pledged to keep the current system as-is. The contradiction muddies the waters on the Trump-Pence ticket's official position.

Kaine is Catholic, as he explained during the debate, and does not personally believe in abortion. But on Tuesday, he expressed his belief that "it is not the role of the public servant to mandate" that anyone else adhere to said public servant's faith. As such, Kaine supports a women's right to choose whether or not to carry a pregnancy to term.

And while his gubernatorial career saw a few moments that didn't quite wash with reproductive rights advocates, the overwhelming majority of his record demonstrates that Kaine stands in favor of increased access to contraception and safe abortion care, and in defense of Roe v. Wade.