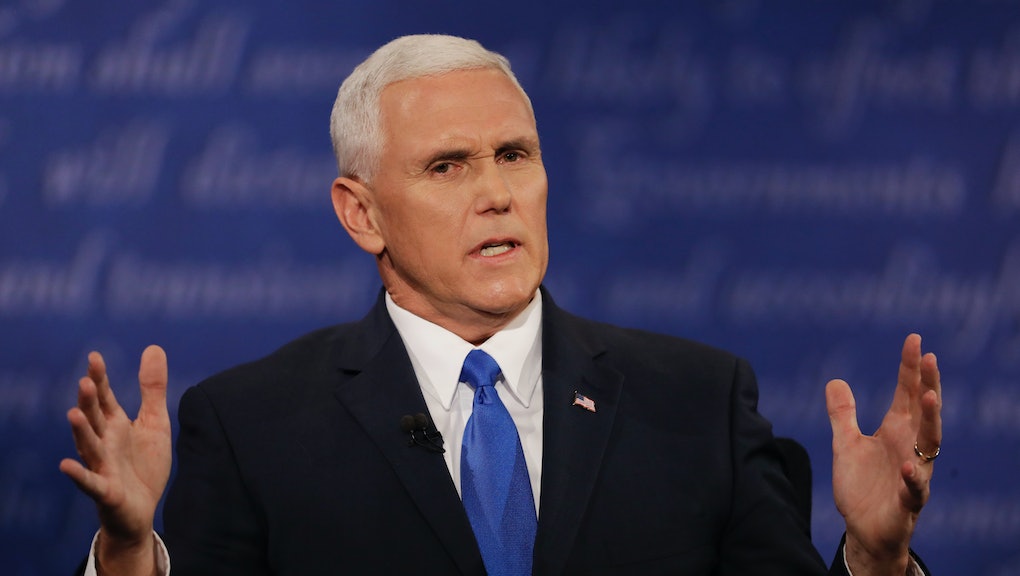 Mike Pence denies "implicit bias" in policing is a big deal. Here are the facts

"Enough of this seeking every opportunity to demean law enforcement by making accusations of implicit bias every time tragedy occurs," Pence said, referring to recent police shootings of black people.

Pence made similar statements in front of a church group in Colorado Springs, Colo., in September.

"Donald Trump and I believe there's been far too much of this talk of institutional bias or racism within law enforcement," Pence said, according to CNN. "In difficult and life threatening situations, mistakes are made and people have to be held to strict account."

It's a nice thought to suggest that simply declining to speak about a topic negates its existence. But if the past few years have taught Americans anything, it's that to deny racial bias in policing in the U.S. is like denying the wind, or the rain.

Here are some facts: Over the past three years, a nationwide protest movement has coalesced explicitly to combat racism in American law enforcement. The movement for Black Lives is fueled by a seemingly perpetual stream of black people being killed by police — including Terence Crutcher in Tulsa, Oklahoma; Keith Lamont Scott in Charlotte, North Carolina; and Carnell Snell, Jr. in Los Angeles, in the past two weeks alone.

This is not just ugly racial optics — it's ugly statistics. Black people are more than twice as likely to be killed by police than white people in 2016 so far, according to the Guardian's database The Counted, despite constituting less than a fifth as large a portion of the U.S. population.

They are also less likely to be posing an imminent lethal threat to police officers when they are shot and killed, according to an analysis of 2015 police-caused fatality data by researchers at the University of Louisville and the University of South Carolina, as reported by the Washington Post.

"The only thing that was significant in predicting whether someone shot and killed by police was unarmed was whether or not they were black," Justin Nix, one of the researchers, wrote.

Such disparities aren't limited to police shootings, either. Recent investigations into the Ferguson, Missouri; Baltimore; and Chicago police departments found overwhelming evidence of racism embedded in their practices more broadly.

The Department of Justice's report on Ferguson put it simply:

"Ferguson's police and municipal court practices both reflect and exacerbate existing racial bias, including racial stereotypes. Ferguson's own data establish clear racial disparities that adversely impact African Americans. The evidence shows that discriminatory intent is part of the reason for these disparities."

A task force appointed by Chicago Mayor Rahm Emanuel released a report that, in the task force's own words, "gives validity to the widely held belief the police have no regard for the sanctity of life when it comes to people of color," according to the Washington Post.

Similar patterns are reflected, to varying degrees, in cities across the U.S. Even the banner policing practice that Donald Trump champions — "stop and frisk," in New York City — was ruled unconstitutional in 2013 because it was racially biased against black people and Hispanics.

So perhaps Mike Pence is right about one thing: policing bias in the "United States" tends not to be implicit at all. It is, in fact, quite explicit, widely documented, directed largely against black people and remarkably common in cities and towns across the U.S.

As for whether we need to talk about it — that depends on whether we, as a country, really want to solve this endemic problem or not.