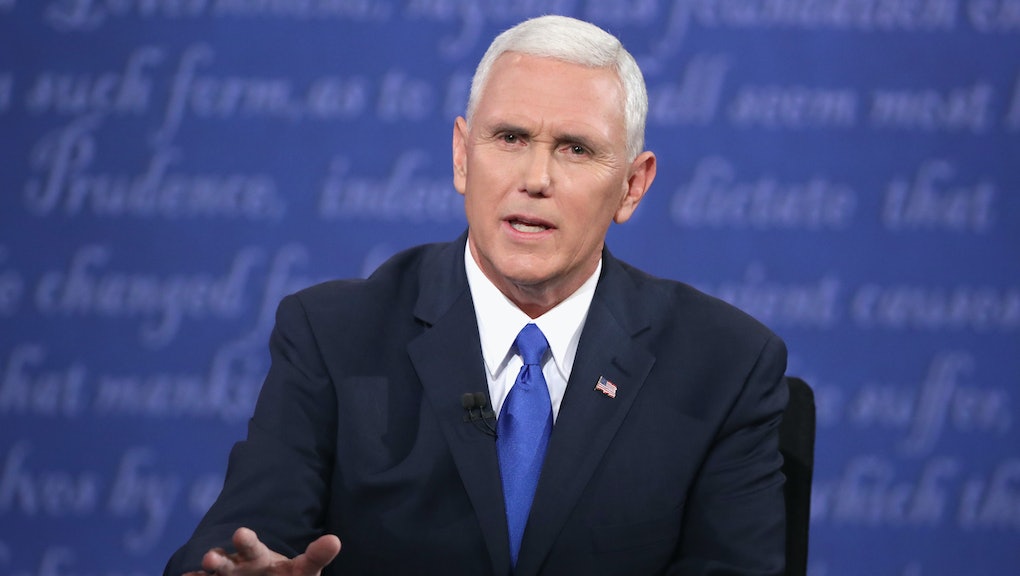 Tuesday night's vice presidential debate between Sen. Tim Kaine and Gov. Mike Pence was not the boring, staid affair most had been expecting.

The candidates sparred on a range of issues, often talking over moderator Elaine Quijano of CBS News and attacking each other in a much more substantive debate than the spectacle that was the first presidential debate.

Kaine was clearly eager for a fight. At almost every juncture, he tried to force Pence to defend Donald Trump's most outlandish comments on the issue at hand — immigration, abortion, taxes, Russia and on and on.

How did Pence respond to Kaine's attacks? Did he engage on the substance and defend his presidential nominee? Did he disavow Trump's worst comments and apologize for his misstatements?

Hardly. Pence instead denied that Trump had ever said the things Kaine attributed to him, becoming a one-man make-work program for fact-checkers for days to come. He claimed Kaine's largely accurate characterizations of Trump's plans were "nonsense," muttering under his breath and shaking his head whenever Kaine quoted Trump.

In doing so, Pence offered a glimpse at how Republicans are planning to move beyond Trump should he lose on Election Day: They'll pretend Trump never happened.

Deny, deny, deny: A representative exchange occurred about halfway through the debate on the question of the candidates' respective immigration plans.

Kaine began by saying that both Trump and Pence wanted to "go house to house, school to school, business to business, and kick out 16 million people."

"Senator, we have a deportation force. It's called Immigration and Customs Enforcement," Pence replied. He again called the idea of deporting 16 million people "nonsense" before calling the Clinton plan "amnesty."

As recently as August, Trump told an Arizona crowd that "anyone who has entered the United States illegally is subject to deportation. That is what it means to have laws and to have a country. Otherwise we don't have a country." Perhaps Pence didn't catch that speech.

On Russia, Pence took a hardline against President Vladimir Putin, who Trump has repeatedly praised. When Kaine raised the question of Trump's business ties to Russia, Pence said he was "offended" by his insinuation.

"I am just saying facts about your running mate," Kaine said.

Not quite a win: Stylistically, Pence won the debate. Kaine was aggressive and at times came across as trying too hard to land a punch, while Pence kept mostly calm and avoided putting his foot into his mouth too many times.

But to award the debate to Pence on style alone is to ignore the fact that the Trump described by Pence bears little resemblance to Trump the actual human being. No matter how many times Pence shakes his head and claims Kaine was spouting "nonsense," Trump has a long track record of insulting nearly every group of Americans deserving of sympathy. He is toxic to the Republican Party. If and when he loses in November, Republicans — even his own running mate! — will be scrambling to forget he ever existed.

Whitewashing Trump's statements does not make them go away, however, and voters have not forgotten them. Pence will be lucky if they have by 2020.