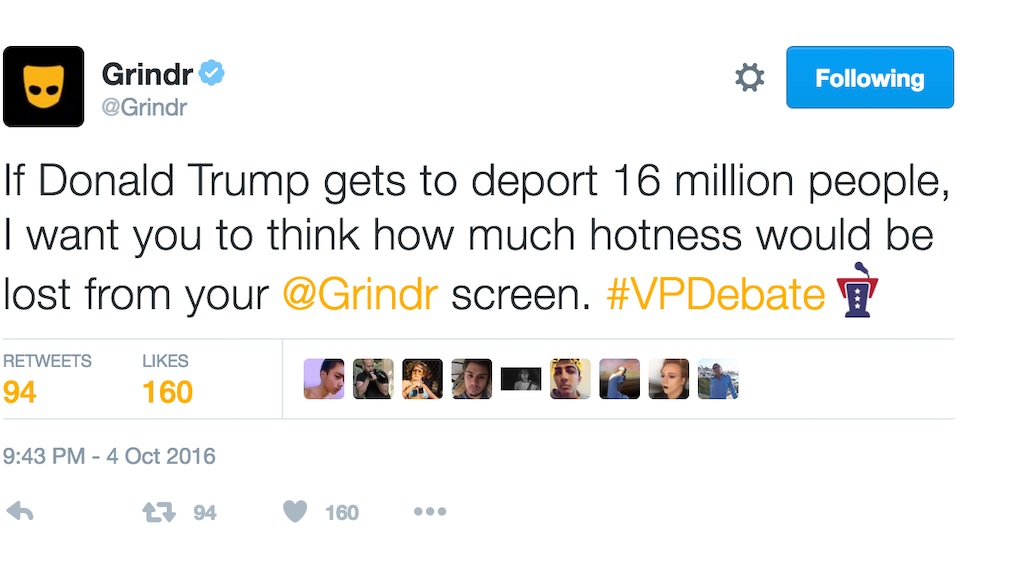 On Tuesday night during the vice presidential debates, out gay comedian Guy Branum took over gay dating app Grindr's Twitter account, tweeting out gifs, memes and commentary during the debate.

The tweets started out innocent enough. "Mike Pence looks like a cartoon turtle," read one tweet. But, another about undocumented immigrants prompted a backlash against the social media account.

"If Donald Trump gets to deport 16 million people, I want you to think how much hotness would be lost from your @Grindr screen. #VPDebate," the tweet read.

During a debate in which Indiana governor Pence made light of Donald Trump's racist comments towards Mexican Americans, Grindr's tweet further trivialized the very real threat of deportation for all immigrants, but especially LGBTQ immigrants, for whom deportation often equals violence and even death.

While the stakes are high for LGBTQ immigrants, Grindr's tweet instead decided to center the white experience of potential LGBTQ deportation.

As Mic previously reported, racism in the gay community is very real and this tweet highlights these racist attitudes in two ways: First, it equates LGBTQ immigrants with their genitalia and sexual availability. Second, it centers the white experience in LGBTQ deportation.

Branum went one step further on his personal Twitter account and responded to the controversy by once again equating LGBTQ deportation with the white gay experience on Grindr.

The funny thing is, this still centers the idea that white people should have access to any body they want.

As journalist Steven Thrasher, who has a history of covering racism in the gay community, wrote on Twitter, "Grindr is custom programmed for white dudes to erase non-white dudes."

And studies back up that sentiment. The 2015 study "'Personal Preference' as the New Racism" argues that Grindr's racial filter "allows users to cleanse particular racial bodies from their viewing practices."

Grindr's tweet argues that deportation would rob white men of their entitlement to black and brown bodies, while racial filters empower white men to say "yes" or "no" to people based on race.

In a statement to Mic, Branum said that, while it's a "comic's job to be flippant," he understood that "you have to be careful."

"As a comic you have to learn from your audience, and last night I did," he wrote. "What did bother me were the number of people who said the problem with the tweet was that it was trivial to bring up gay sex as an issue when families are being torn apart."

He added, "Gay lives, gay stories, and gay relationships should be taken seriously when deciding US law, and I'm sorry an ill-chosen, bad joke on my part has distracted from that message."

In a political climate where white men like Donald Trump and his xenophobic attitudes denigrate and dehumanize immigrants, it would be nice if the white LGBTQ community did not join him by thinking of undocumented LGBTQ people solely by what they can do in bed.