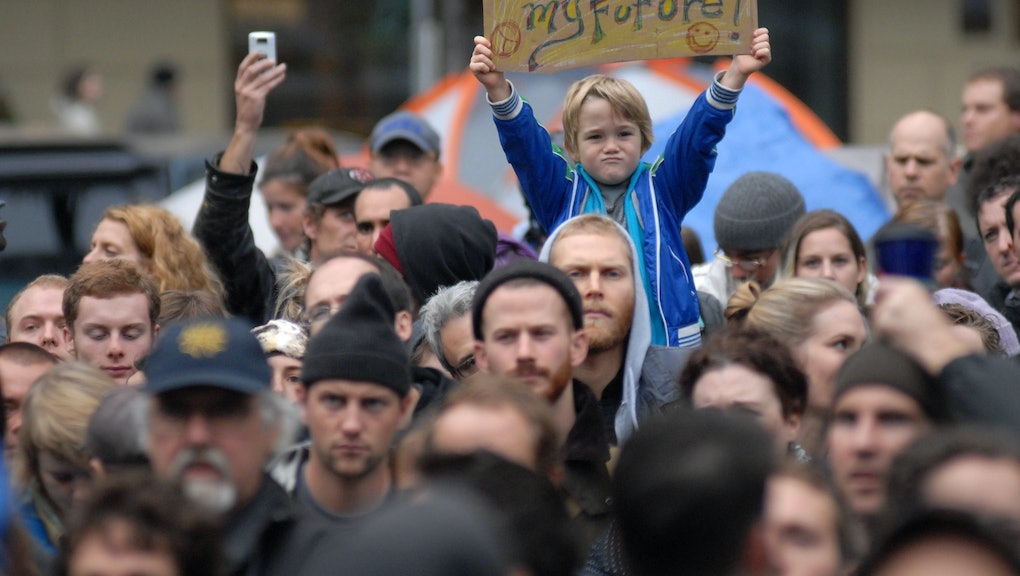 Young and can't find a job? You're far from alone.

Twenty-somethings suffered disproportionately from the financial crisis and the ensuing global recession — so much so that some may never recover their job prospects, according to a deeply depressing new report from the Organization for Economic Cooperation and Development.

Almost 1 in 10 jobs held by people under age 30 were destroyed during the financial crisis, and many of them haven't come back, the OECD found.

Across the OECD — a group of 35 countries including the United States and others across Europe, South America and Asia — youth unemployment has been unchanged since 2010, and still hasn't recovered to pre-recession levels.

The report is particularly concerned with what are known as "NEETs": an acronym for "not in education, employment or training," a group that comprises 15% of youth aged 15 to 29.

According to the OECD, the job prospects for so-called NEETs "may not improve even if the economy picks up."

Women are 1.4 times as likely to be NEETs, with the report citing the high cost of childcare in places like the U.S. and Ireland as a contributing reason.

But a big problem, the report cites, is education.

"It is getting harder and harder for young people with low skills to find a job, let alone a steady job in today's workplace," Stefano Scarpetta, OECD Director of Employment, Labor and Social Affairs, said in a statement about the findings.

One solution would be helping people complete high school and college education or vocational training, the report recommended, as those who leave school at age 16 or younger account for more than a third of NEETs.

Some countries have already taken small steps to address the problem of youth unemployment: Back in August, for example, President Barack Obama announced a new pilot program to fund experimental vocational training, such as coding bootcamps.

But the financial challenges facing young people today are truly unprecedented. A March report from the Center for American Progress points out that it will take far more than education to repair wages for young U.S. workers. The current generation is, in fact, extremely educated, and yet has seen negative or flat real pay growth: The median 30-year-old in 2014 earned the same (inflation-adjusted) wage as the median 30-year-old in 1979.

To truly get to pre-recession levels, young people need legislation that will make it easier for workers to get benefits like paid leave — and to engage in collective bargaining, CAP associate director for economic policy Brendan Duke wrote in the report.

Now, these recommendations are all fine and good at a policy level, but what if you yourself have been laid off, or are trying to find a job?

Experts recommend a "30-70" rule: Spend 30% of your time filling out applications and the other 70% attending networking events, going to job fairs, and marketing yourself.

For more advice, check out Mic's guide to surviving a layoff.