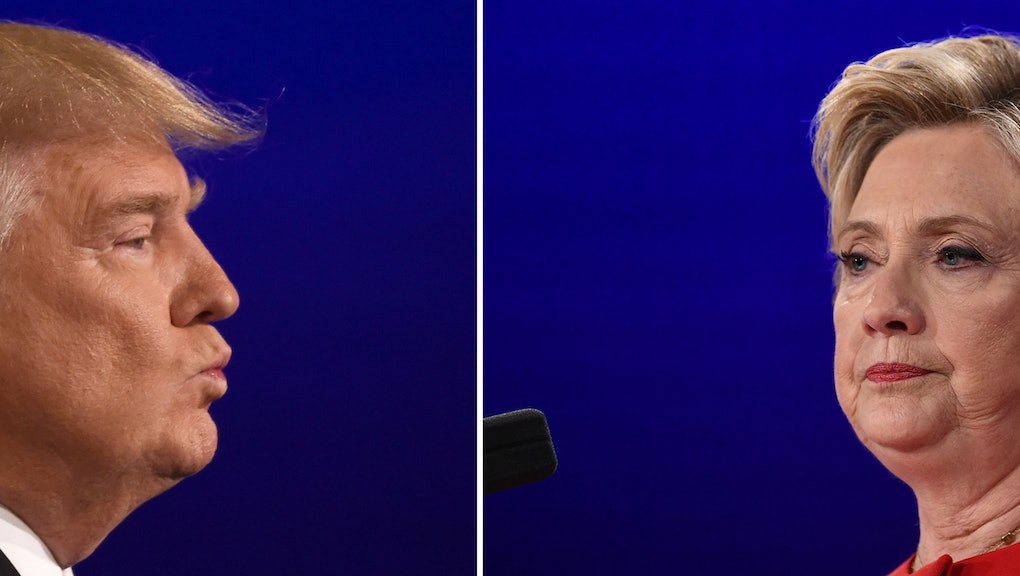 Fasten your seat belts: Why the second presidential debate will be uglier than the first

The first presidential debate between Donald Trump and Hillary Clinton was a raucous affair, with Trump not only interrupting Clinton but launching sexist attacks her way — questioning her "stamina" and "presidential look" and defending his past fat-shaming against women like comedian Rosie O'Donnell.

But that debate might seem tame compared to the performance Trump and his top campaign surrogates are telegraphing could come at Sunday night's debate in St. Louis.

Trump will walk out onto the debate stage two days after damaging videotape surfaced of him bragging about groping women, saying he could "grab them by the pussy" because he was a celebrity and could "do anything" to women.

Since the video of Trump bragging about sexual assault became public, he delivered two faux apologies that sounded more like threats than they did the words of a truly remorseful man.

After claiming that his words did not reflect his true character — despite the fact that multiple women have recounted the disturbing language he used towards them behind closed doors — Trump went on to attack former President Bill Clinton.

"I've said some foolish things. But there's a big difference between the words and actions of other people. Bill Clinton has actually abused women and Hillary has bullied, attacked, shamed and intimidated his victims," Trump said.

He then issued his threat.

"See you at the debate," he said, suggesting he's going to bring up Clinton's past behavior — which Trump had actually defended before he became a candidate for president.

With just over 48 hours between the release of the audio and Trump's debate stage appearance, it's unlikely the notoriously hot-tempered Trump will have had sufficient time to cool off.

He's being hammered in the press, including by members of his own party, who are beginning to slowly renounce their support — or at the very least chastise Trump's repugnant words.

In the past, Trump hasn't taken attacks on his character well, lashing out on Twitter and at rallies at anyone who dares lay a rhetorical finger on him.

On Thursday, Trump attacked GOP Sen. Mark Kirk, who has refused to vote for Trump, saying, "Guys like Kirk who are behind in the polls can't figure out why guys like me are ahead."

Even worse for Republicans hoping a more measured Trump walks onto the debate stage is the fact that he's already been lashing out for the past two weeks, after his first poor debate performance led to his dramatic slide in the polls, a decline that's made him agitated exhibit behavior that's gotten him into even more trouble.

Last weekend, Trump mocked Clinton's pneumonia and baselessly questioned whether she had cheated on her husband. It's unclear whether he'd give a similar performance on a debate stage in front of millions of viewers.

And for a man who is at his most confident and best behavior when he's winning, Trump will enter the debate behind in the polls and agitated by other surveys that showed Americans viewed him as the loser of the first televised, on-stage battle with Clinton.

Since the debate, polls show that even fewer voters think Trump has the right temperament to serve as president.

Before the debate, 38% of likely voters said Trump had the "temperament to serve effectively as president," according to a CNN/ORC poll. That number fell to just 33% after the debate.

Yet Trump appears ready to splash in the mud at Sunday's debate and bring up Clinton's marital troubles — a risky strategy given his poor standing in with women.

Women voters who may be inclined to have sympathy for Clinton's marital troubles, rather than blame her for them.

At any rate, Trump frustrated even top supporters with his conduct after the first debate, with surrogates like Newt Gingrich urging him to act more presidential.

Even more of a wildcard is how Trump will behave in a town-hall debate format, with everyday Americans asking the questions, rather than a moderator.

Trump has proven he's prone to lashing out at anyone who questions him — including the Gold Star Khan family and former Miss Universe Alicia Machado, whom Trump fat-shamed for days following the debate.

The Machado controversy highlights yet another reality surrounding the upcoming debate: No matter how Trump conducts himself Sunday night, it's an open question whether he'll be able to restrain himself in the days to come if he faces tough questions from the moderators or members of the audience.

With one month until voters head to the polls, he can ill-afford to spend precious time nursing such grievances.