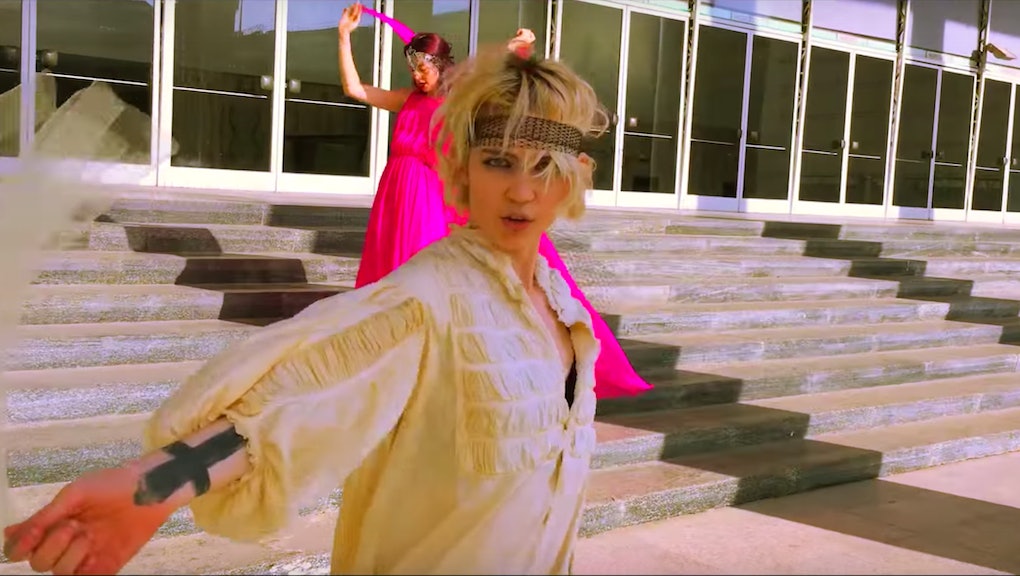 Since emerging on the scene in 2010 with her bewildering debut Geidi Primes, Grimes has continually pushed out against pop and indie's fragile ceilings. With ethereal synths and wispy melodies, she's collapsed the boundary dividing what indie and pop releases sound like. Wednesday, she's offered a piece of work that will help people rethink what such a release can look like as well.

"They are guerrilla-style vids, a la 'realiti,'" Grimes wrote in a note accompanying the release, referencing one of her past small-scale videos. "So there was no crew, makeup, cameras, lights. Just us and a phone, so maybe don't expect anything too fancy. That said, we're really proud of what we made."

She should be. There's a power in the film's casual, DIY feel, and it offers a candid look at Grimes' expansive creativity. It's not something of an attitude Grimes turns off at the doors to the studio or at the curtain's close — she carries it through her daily travels. Train a camera on it, and any moment in one's life can be "art."

So many of Grimes' works and words in the past have focused on creative empowerment. Her albums are meticulously engineered, but they're playful in their execution. She drew up the art for all her tracks on Art Angels, and she's written Tumblr essays encouraging artists to psych themselves up and demand creative agency.

"I don't want to have to compromise my morals in order to make a living," she wrote on Tumblr. "I dont want my words to be taken out of context."

She's spoken out against sexism in the music industry, going out of her way to ensure the world knows who's making the creative and technical decisions in her projects. "I can't use an outside engineer," Grimes told the New Yorker around the time of Art Angels' release. "Because, if I use an engineer, then people start being, like, 'Oh! That guy just did it all.'"

The rest of the project offers a glimpse at Grimes' colorful world. The artist dances in elaborate masquerade masks through crumbling castles and elegant ballrooms with equal grace.

The videos are transparent in their creative process. In the beginning of the "World Princess Part II" segment, the girls seemingly stumble onto a beautiful shot while walking down toward a castle gate.

"Oh my god, this shot!" the cameraman says. "Keep going! Wait, stay..." — and the song kicks in. They're casual words that anyone who's ever tried to capture a video has likely spoken. For a moment, the apparent divide separating the bedroom pop aspirant from the Roc Nation-signed artist collapses.

With every visual album, digital lyric book, magazine or digital short story artists release, the process of releasing an album feels more like an act of immersive world-building than the simple mix-master-publish process that has preceded every release since the dawn of the music industry. In a way, Ac!d Chronicles seems to offer a brief pause to check this multimedia arms race.

It proves that visual supplements needn't have a huge budget or time investment — a la Lemonade,