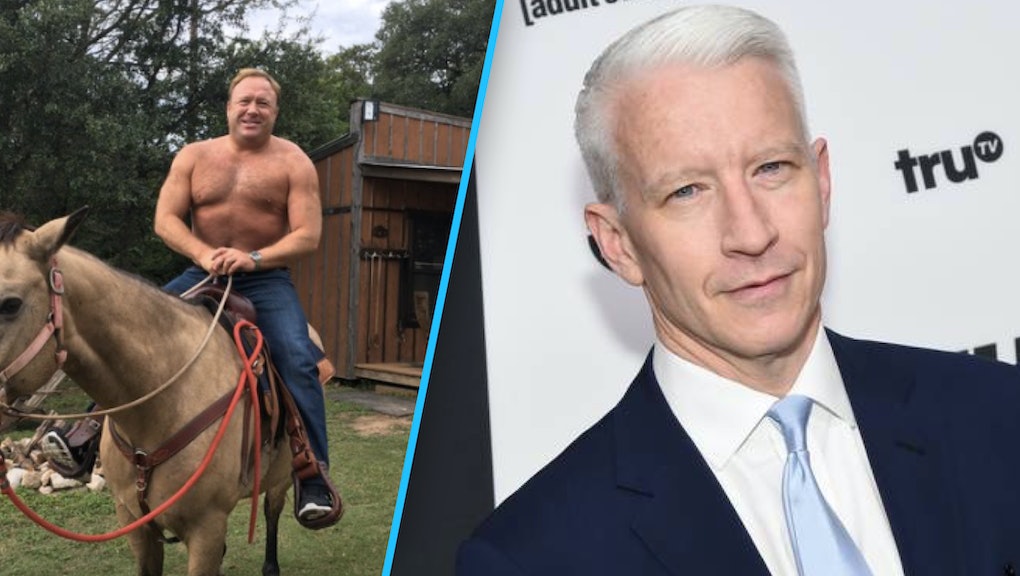 No, Alex Jones, Anderson Cooper is not a member of the CIA

It's a "rigged system imploding," Jones informed his viewers in a clip captured by Mediaite. "This is history happening and so I am desperate. I know Trump's ahead, I know he's winning, I know they're gonna pull out every stop."

"They've got CIA Anderson Cooper running the next debate," Jones continued. "He's admittedly CIA. And so we are storming the Bastille peacefully with 21st century warfare, which is information warfare."

In 2006, Cooper admitted to working for the CIA nearly two decades prior — though not, as Jones suggested, as an intelligence mole within the nation's pundit class. Instead, as Cooper wrote in a post to CNN's web site, "For a couple months over the course of two summers, I worked at the CIA headquarters in Langley, Virginia ... I know the CIA may sound more exotic and mysterious, but it was actually pretty bureaucratic and mundane, at least the little bit that I saw of it."

Summer interns are typically not given access to high-level classified information, let alone used as deep-cover agents. Nor is Trump ahead, either in the races for the popular vote or the electoral college. An average of polls kept by Real Clear Politics shows Democratic nominee Hillary Clinton ahead with a spread of 3.9%, with Trump failing to outstrip her in that average since late July. Poll-tracking site FiveThirtyEight's advanced model combining polls and economic and historical data shows Clinton on track to capture 303 electoral votes to Trump's 235.

But Jones is known less for blowing open real conspiracies than throwing around wild assertions, selling sketchy health products and tweeting shirtless photos of himself.

In recent weeks, Jones has busied himself claiming "globalists" may fake an assassination attempt on Clinton to throw the election, suggesting President Barack Obama's mother was a CIA "sex operative" and responding to Obama's climate change talks in Africa by calling him the "devil with a brown face sent to screw you."

More troubling is the way Trump himself has adopted a similarly extremist outlook, claiming his poor performance in the Sept. 26 was due to rigging and saying the only way he can lose on Nov. 8 is massive voter fraud.