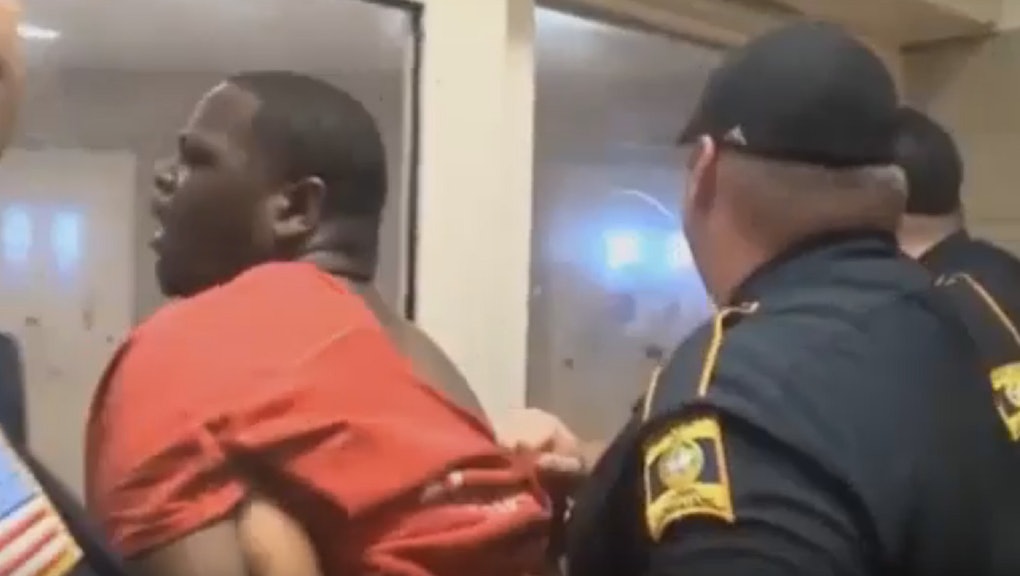 A video from a Texas-Arkansas border jail released by the Huffington Post on Wednesday shows a black inmate detained on misdemeanor charges pounced on and pepper sprayed by corrections officers, all the while saying "I can't breathe," before dragging him to a cell where he was later found dead.

Michael Sabbie, a 35-year-old father of four from the Arkansas side of Texarkana, had been detained for three days at the city's Bi State Jail on misdemeanor charges of domestic assault before he was pepper sprayed and wrestled to the ground by six corrections officers on July 22, 2015. The next day, he was found unresponsive in his cell; according to the Post, a medical examiner deemed Sabbie's death "natural," noting he was obese and had significant heart damage.

But over the course of the prior three days, Sabbie had repeatedly sought help for difficulty breathing and symptoms he believed resembled pneumonia. After he first reported symptoms on July 20, he was found on the floor of his cell on the morning of July 21 and in a court appearance that afternoon a bailiff as well as a judge both noticed his difficulty breathing.

(Warning: This footage is graphic.)

And the video shows while leaving that courtroom, Sabbie leaned against a wall and requested to use a phone, before Officer Clint Brown and other guards grabbed and wrestled him. Another officer, Lt. Nathaniel Johnson, pepper sprayed him. He was subsequently threatened with more pepper spray as a consequence for noncompliance.

"Get your hands behind your back or you'll get it again," one guard says in the video.

Erik J. Heipt, one of the Sabbie family attorneys, told the Post that Sabbie says "I can't breathe" at least 19 times in the video and that without its existence, "we'd never know that he had been begging for help due to his shortness of breath and inability to breathe." He said they believed Sabbie was experiencing pulmonary edema, a condition in which fluid builds up in the lungs, often due to heart conditions.

The Bi State Jail is run by LaSalle Corrections, a for-profit company that is paid $39.50 a day by local governments to house inmates and pays guards a starting wage of $10 an hour, the Post reported. As part of its contract with Bowie County, the corporation pays for all medical costs and assumes liability.

The Department of Justice recently announced it is phasing out the use of such private facilities, concluding they are more dangerous and more poorly run than their public counterparts.

In a statement, Deputy Attorney General Sally Q. Yates wrote private prisons "simply do not provide the same level of correctional services, programs, and resources; they do not save substantially on costs; and as noted in a recent report by the department's Office of Inspector General, they do not maintain the same level of safety and security."