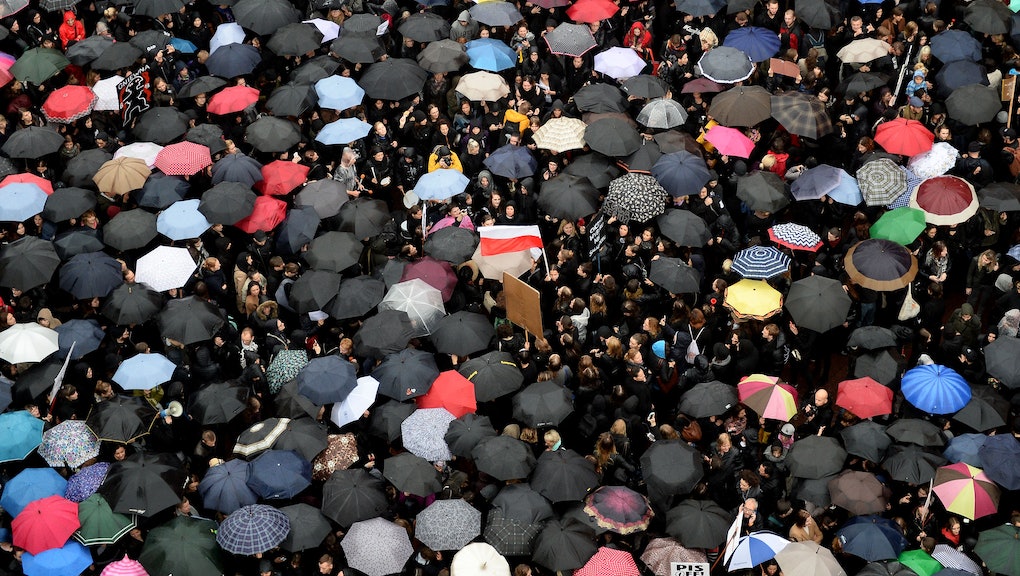 Lawmakers in Poland voted overwhelmingly Thursday against a controversial abortion ban, the Associated Press reported. Though members of the conservative ruling party, Law and Justice, originally supported the proposal, the parliament reportedly voted 352-58 to reject the ban.

The proposed ban would have criminalized nearly all abortions — the only exception would be "the 'unintended' death of a fetus while saving a woman's life," according to the Washington Post. Women who received abortions and doctors who performed the procedures would reportedly have been subject to up to five years in prison.

The proposal was championed by an anti-abortion group and garnered 450,000 signatures, the AP reported.

Still, many were outraged. In Poland on Monday, thousands of abortion activists dressed in black and linked arms to protest in the streets.

The protest thrived on social media, too, under the hashtags #CzarnyProtest and #BlackMonday. Protests even spread to other cities, including London and Berlin, where activists stood in solidarity with the women of Poland.

"Poland's abortion law is already one of the most restrictive in Europe and these proposals are an all-out assault on women and girls and their right to make decisions about their own bodies," Kasia Staszewska, director of Amnesty International U.K.'s Women's Rights program, said in a statement, according to the Los Angeles Times.

"A woman who needs an abortion is not a criminal, and decisions about her body and her health should never be placed in the hands of politicians," Staszewska said.

Poland has had one of Europe's strictest abortion laws since 1993, when a new law established a middle ground between communist-era policies and an all-out ban on abortions, according to the Washington Post. Currently, the country only permits abortions in cases of rape or incest, or when the mother or fetus' health is at risk, and only during the first 12 weeks of pregnancy.