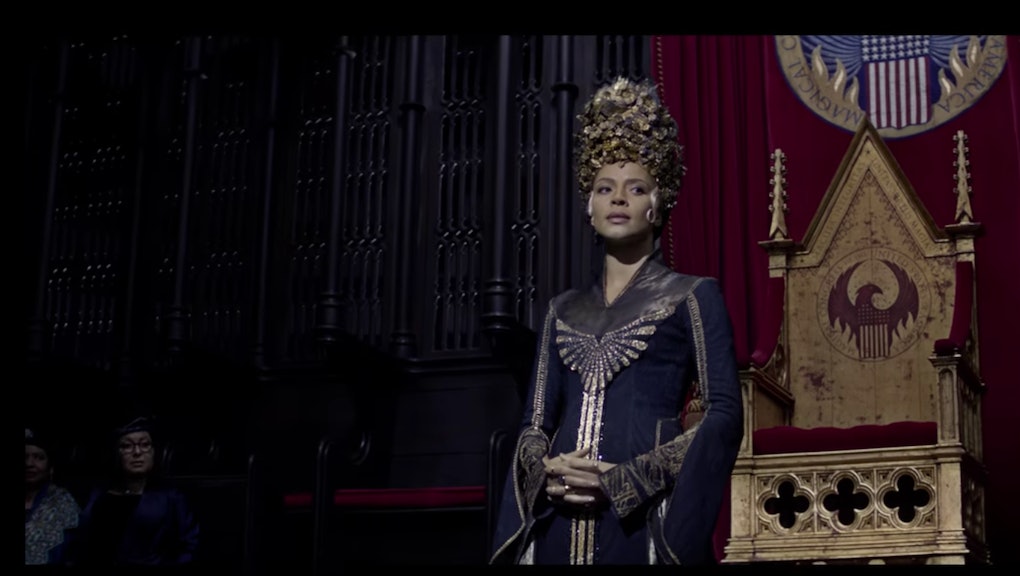 Ahead of November's release of the first Harry Potter spinoff film, Fantastic Beasts and Where to Find Them, author J.K. Rowling has unveiled her third story breaking down the history of magic in North America. The new piece, published on Pottermore, is "The Magical Congress of the United States of America," a document detailing the history of the American Ministry of Magic up until the events of Fantastic Beasts, which takes place in the 1920s.

The fictitious history takes real-life accounts of the Salem witch trials and uses them to explain the formation of MACUSA, as it's abbreviated, designed to unite the American Wizarding World under an organization to guard against anti-wizarding sentiment. This, of course, means segregating wizards from the "no-maj," aka the American term for muggles.

The history goes that the headquarters of MACUSA bounced around between the Appalachian mountains, rural Virginia — where a magic-specific dog breed attacked a no-maj — Baltimore and Washington, before settling on New York City. The story also explains how in Washington in 1790, the MACUSA passed "Rappaport's Law," which forbids marriage and friendships between wizards and no-maj.

The law brings important context to Fantastic Beasts as its protagonist, Newt Scamander, befriends a no-maj while trying to track down all the creatures that escaped his briefcase when he crossed the Atlantic. As Rowling explains, the way magic is treated in North America is uniquely different from the Wizarding World abroad.

"Newt's been across pretty much every continent, but magic developed very differently in America," Rowling told Entertainment Weekly. "Newt accidentally walks right into the middle of MACUSA. He gets caught up into a society he doesn't understand."

"The Magical Congress of the United States of America" is essential reading ahead of Fantastic Beasts, which arrives in theaters Nov. 18.