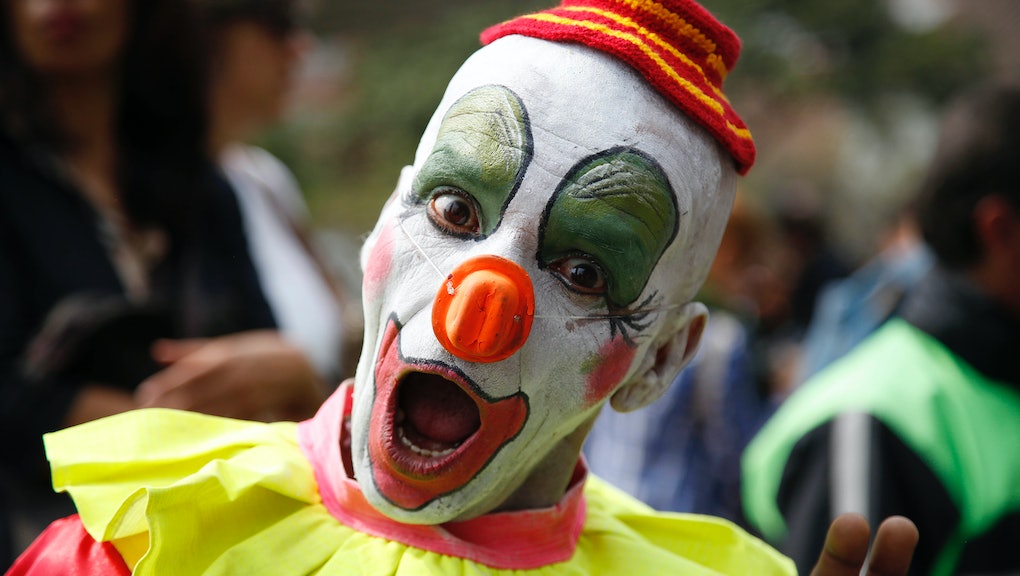 Clown sightings 2016: What's behind the bizarre Twitter video craze sweeping the US?

Those of us who don't find clowns downright terrifying at the very least find them creepy — and surely we can all agree we'd never want to come face-to-face with one in a dark alley.

Until recently, clowns had been pretty easy to avoid — one only needed to stay away from carnivals, circuses and children's birthday parties. But now it seems nowhere is safe, nowhere is sacred, after multiple clown sightings have been reported on college campuses, in the woods and even on New York City's Upper East Side.

The mass hysteria over clowns has reached such great heights, a reporter even asked White House Press Secretary Josh Earnest if President Barack Obama had been filled in on the epidemic. Because this, apparently, is the national issue Americans are most concerned about.

With a historic presidential election in a month and a natural disaster in our midst, it's time to put this clown business to bed once and for all.

Clown sightings in Texas, Michigan, South Carolina and other states

On Wednesday, an entire Texas school district went on lockdown after a bus driver reported seeing a clown sitting in a vehicle by a school. According to Time, the alleged sighting came after threats of an attack on the same school circulated on social media over the weekend.

Superintendent Sue Nelson told Time one of the messages read, "We're coming. There are more of us than there are of you. If you think this is fake, wait until Monday." The district decided it couldn't afford "not to take it seriously," Nelson said.

Meanwhile, in Detroit, authorities are investigating allegations that multiple people wearing "scary clown masks" attacked a 7-year-old boy and scared two women. On Sunday, a 17-year-old in the same region reported a clown tried to follow him in a vehicle.

All of these incidents follow initial clown sightings in South Carolina, the birthplace of the so-called "clown craze." At the end of August, children in Greenville County claimed a group of clowns had been offering them money to lure them to their house in the woods by a pond. Since then, reports have flooded local police departments with sightings from both children and adults.

Those who don't take their clown concerns directly to the police have been first taking them to Twitter. In response, accounts like @ClownSighting and @SpookyClowns have cropped up on the social network, collecting images and footage of sightings as well as, more recently, attempts to eradicate them.

Following the clown sightings on Penn State's campus, a freshman named Addison Carson shared a video on Twitter of a reported 6,000-person mob taking to the streets to "hunt it down."

The social media hype has led police departments to make statements advising people on what to do if they see a clown. This is where we're at as a society, everyone.

Are these clown sightings real, or just a big hoax?

As #ClownGate2016 barrels on, our only remaining choice is to decide what to make of it. On Thursday, CNN floated some "legit possibilities," speculating that the sightings might be "viral marketing," "folklore with a modern twist" or a projection of "human anxieties."

These are all within the realm of possibility. A clown that once haunted Green Bay, Wisconsin, turned out to be part of a marketing campaign for a short film. The clown's name is Gags and, now that his identity has been revealed, he has a Facebook page. Sure, it's unlikely that every single clown reportedly spotted across the country is part of a viral campaign — but maybe it would make us all feel better if we pretended they were.

Folklorist Benjamin Radford told CNN that the mass hysteria is a symptom of our own lingering anxieties — so we could, in fact, have the power to make it go away.

"These sorts of panics tend to surface when there's underlying social anxiety," Radford said. "This is an election year, there's lots of political and ideological divisions, there's also of course [the awareness of] school shootings and terrorist attacks."

For the record, many police officers are saying the clown sightings largely amount to a colossal hoax. But that doesn't mean there aren't consequences for those who spread it around.

According to the New York Times, authorities have made 12 arrests for false "creepy clown" reports and threats.