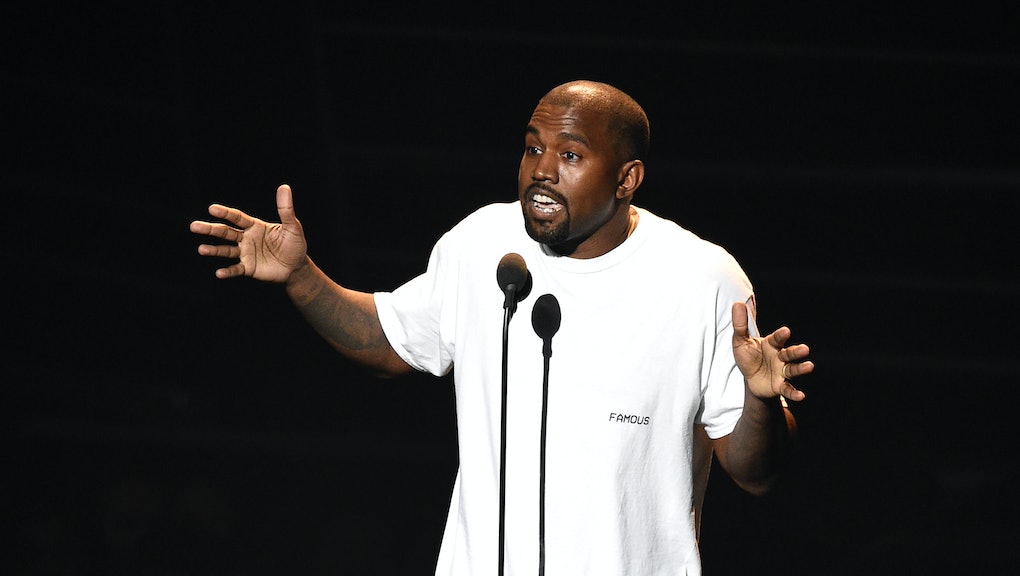 Even the all-knowing, all-seeing Yeezus didn't likely foresee the size of the shitstorm that would follow when he debuted "Famous" during his Tidal livestream of The Life of Pablo back in February. Its lyric, "I feel like me and Taylor might still have sex/ Why? I made that bitch famous," immediately became the biggest talking point of the evening. It started a he-said, she-said, goose chase for the receipts to prove whether or not Kanye approved the line with Taylor Swift. Kim Kardashian West had them the whole time.

However, the media fiasco could have been a lot worse.

Recently surfaced demos of the song show Kanye West going after Amber Rose in addition to Taylor Swift. The original lyric: "I feel like Amber Rose still owes me sex, why?" Kanye raps. "I made that bitch famous/ Not really, but somewhat famous." The queen of the slut-shaming clapback would have had a field day with that one — and still might.

According to Pigeons and Planes, which reported on the leak Thursday, the track was originally titled "Nina Chop" and featured verses and hooks from sometime West-collaborator Young Thug. In this version, the track still seems far from being complete. The second verse contains slurred passages, during which West seems to work out flows for lyrics he hadn't fully written yet. But the intro is clear as day.

Rose and West actually traded barbs around the release of The Life of Pablo already, without this line even having to air. It started when Wiz Khalifa, Rose's former husband, seemed to accuse West of stealing his prior album name, Waves, from incarcerated rapper Max B. West went off in a Twitter rant, saying "you let a stripper trap you," referring to Rose, and that the Pittsburg rapper "wouldn't have a child if it wasn't for me" presumably because Kanye West made her famous, a seeming twist on the concept in the "Nina Chop" lyric.

Rose jumped in and slut-shamed Kanye West right back, asking, "Are u mad i'm not around to play in ur asshole anymore?"

The talk show host and outspoken activist in favor of sexual liberation has since made a career out of her epic slut-shaming clapbacks. In July, she got her own show, The Amber Rose Show, where she frequently offers advice to viewers to help them feel more comfortable with themselves and their sexuality. Her empire would likely only be bigger now had she the chance to sound off on West for thinking she owes him anything for her fame.