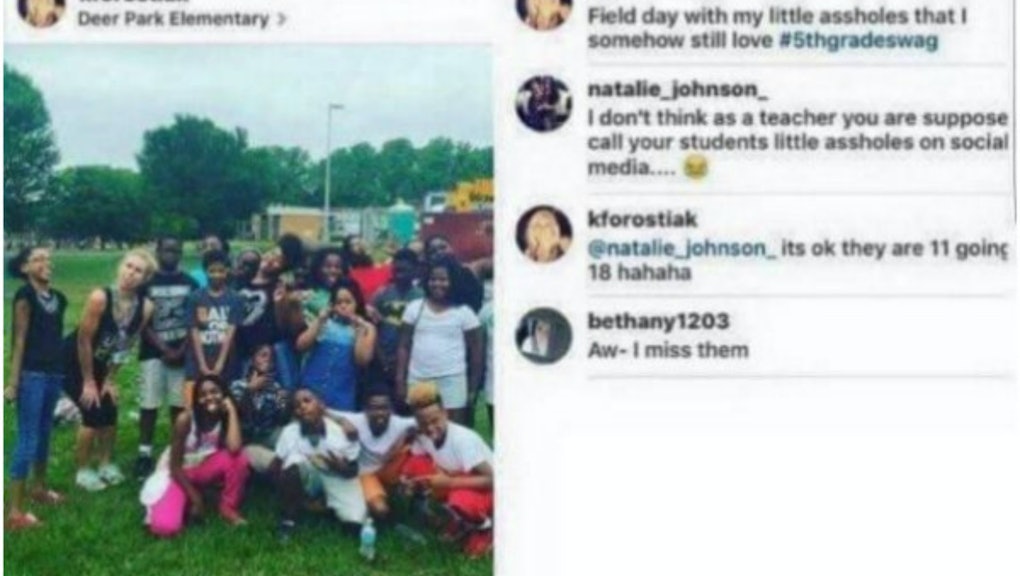 This probably isn't in the approved curriculum.

A white Maryland schoolteacher is facing disciplinary action after she posted an image of a black students dressed up in a racially insensitive costume and calling others degrading names, the Atlanta Black Star reported.

One photo obtained by the Star shows one of Forostiak's black students dressed in a sombrero and fake mustache.

"This is an African-American Mexican," she wrote in the caption.

Forostiak wrote insulting captions to accompany other photos as well.

"When all the kids and staff are questioning your lipstick but you just flash the 'bitch I'm cute AF' face," one read beneath a photo of a young girl.

With an image of her students playing outside, Forostiak wrote, "Field day with my little assholes that I somehow still love."

Mychael Dickerson, chief communications officer for Baltimore County Public Schools, confirmed to Mic that Forostiak is a teacher in the Baltimore County school system. Dickerson also confirmed Forostiak apologized and has received disciplinary action, though he declined to specify what kind.

"She's very regretful and sorry for having posted the image and she understands it was inappropriate," Dickerson said. "She is accepting the disciplinary action put forth by the human resources department."

Deer Park Elementary School did not immediately return a request for comment.