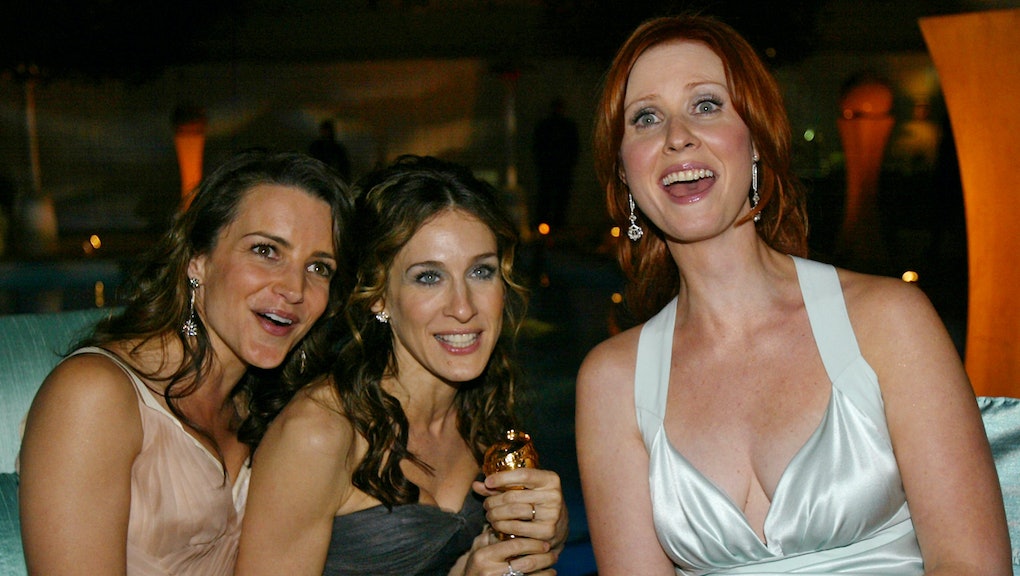 Apparently, Sarah Jessica Parker has a wild fan theory about Sex and the City that would change everything if it were true — except that it makes absolutely no sense. Parker was interviewed on the podcast Nerdist this week and she told host Chris Hardwick about her spin on the show: "I used to wonder if Samantha, Charlotte and Miranda were real," Parker said. "That that wasn't just her column."

Wait, what? Is SJP revealing that, during the years she spent portraying Sex and the City's central heroine Carrie Bradshaw, she harbored a secret theory that Samantha, Charlotte and Miranda  (a.k.a. "The Girls") were all figments of Carrie's writerly imagination?

This a little more grounded than the fan theory that Sandy was dead the whole time in Grease — but just barely. Parker revealed she thought Bradshaw could have created her three friends as a "literary conceit" — three archetypical women characters created so that Bradshaw could tell stories in her column.

If Charlotte and Samantha and Miranda were all made up, that would explain Carrie's ability to narrate scenes she's not in – but other than that, it doesn't really make sense. Does that mean the plot of every single episode is the text of Carrie's column that week? That would make her columns super long and dialogue-heavy and probably not all that fun to read.

Maybe Parker is trying to pull a J.K. Rowling and blow our minds with "new information" revealed years after the show ended, but it also doesn't really matter whether she thinks Charlotte and Samantha and Miranda were "fictional" fictional characters or just normal fictional characters. To us, they'll always be real.