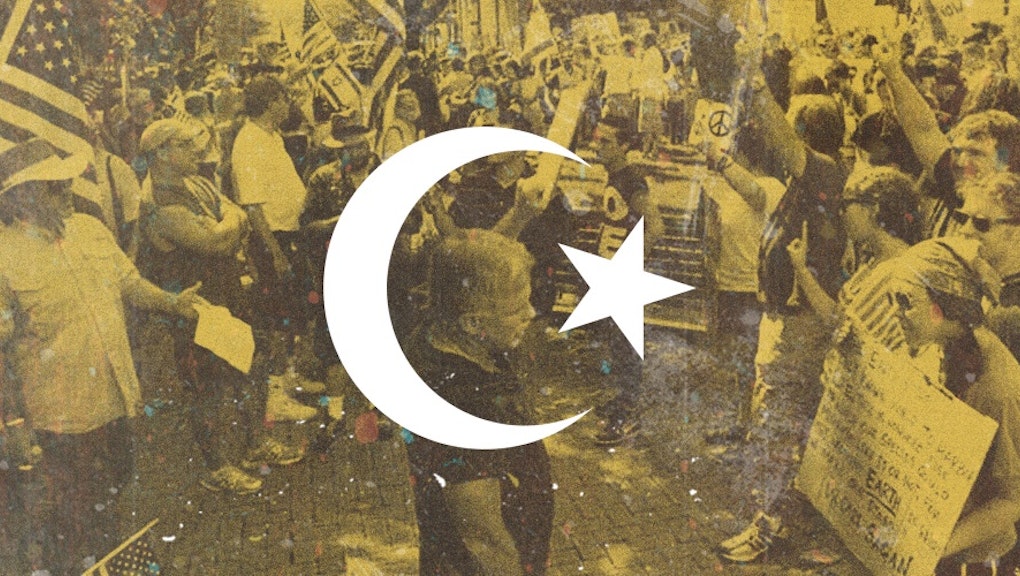 Meet the activists fighting to save Tennessee's children from "Islamic indoctrination"

Steve Gill is fighting against what he calls "Islamic indoctrination" in U.S. classrooms — and in Tennessee, he's winning.

Gill's first crusade started in October 2015. At a town hall meeting in White County — a rural constituency about 100 miles east of Nashville — hundreds of concerned parents and citizens had gathered to confront local school board members about the textbooks their children were using.

"We had 12 local pastors that prayed over the crowd of 1,200 for guidance," Gill said. "A couple of guest speakers — including Muslims who became Christian converts — came over to talk about the true history of Islam and point out what's historically inaccurate, page by page, of the textbooks."

Word had gotten around that the most recent books the board had purchased contained verses from the Quran, the Islamic holy text. This did not sit well in the predominantly white, conservative, evangelical Christian community. So they called Steve Gill to help them.

Gill is a conservative talk radio personality based in Nashville, but his influence can be felt across Tennessee. A former White House fellow under the Clinton and George W. Bush administrations, the 59-year-old had led a successful fight to block former Gov. Don Sundquist's proposed state income tax increases in 2014.

Gill's charisma, political profile and fiery Christian fervor made him a logical choice to lead the campaign in White County.

Gill's approach to helping the people of White County has bordered on paranoia. He insists the Pearson Group — the British-owned education publishing firm that prints many of the state's textbooks — has an inherent pro-Islam bias. His reason? A Libyan state-sponsored wealth fund called the Libyan Investment Authority owned 3.3% of the company in stocks in 2011 (that amount is currently frozen).

"[The LIA] is run by Muammar Gaddafi's two sons, which kind of does give them a reason to be tilted in favor of Islam," Gill said.

He is not alone in his suspicions. Julie West, a local education activist and evangelical theologian, harbors similar views about the Pearson Group's alleged pro-Islam leanings.

"Pearson has had editors who have openly stated they wanted to unleash bloodless jihad in America's classrooms through its textbooks," she said in a phone interview.

Neither of these claims seems to be supported by facts. Pearson Group spokespersons have vehemently denied anyone in their employ has ever made such comments, nor do they support their content. As for the alleged omission from textbooks of religions besides Islam:

"There are verses in the Quran in Pearson's textbooks — just like there are verses from the Torah and Bible in the coverage of Judaism and Christianity," said Scott Overland, Pearson Group's media director.

Similar efforts in Murray County, Williamson County and elsewhere in Tennessee were taking shape around the same time. Residents across the state held televised town hall meetings to debate the topic. They pressured elected officials. In March, they saw success when state lawmakers passed HB 1905, a Republican-sponsored bill that lets local school boards decide how religion is taught in their curricula.

Most recently, in September, the CAII accomplished its biggest feat yet: forcing the Tennessee State Board of Education to seriously debate overhauling what children are taught about Islam in their social studies classes.

"I think we were very successful," Gill said when asked if his efforts helped shape this decision. "Most parents are so busy taking kids to soccer practice or going to the grocery store. We told them to look at what is in their children's textbooks, and if they didn't like it, they need to take it up with their state representative."

If successful, Gill's campaign could wipe significant chunks of Islamic history from the state's education standards by functionally eliminating current lessons about Islam as a requirement.

Here's how: In 2017, the State Board of Education will approve several changes to its middle school history standards, laying the groundwork for what is and is not required for children to be taught for a minimum of six years after their enactment.

Among this year's set of proposed changes — as dictated, in part, by the efforts of Gill, the CAII and other concerned Tennesseans — are some that would make it no longer required for educators to teach about certain parts of Islamic history and culture.

If the standard drafts are approved, it will become optional to teach seventh-graders in Tennessee about the Prophet Muhammad; the differences between Sunni, Shia and Sufi sects; the Golden Age of Islamic enlightenment; and the interfaith connection and cultural exchanges between Islam, Christianity and Judaism — all of which are in the current standards.

In their place, the standards would only require a curriculum subject titled "Southwest Asia and North Africa 400-1500" (it used to be called "Islamic World 400 A.D./C.E. 1500s"). Another section would also remove mention of Islam — replacing what used to be the "Islamic World" with a section called "Africa."

The educational cost of these shifts would be steep. Children who don't learn about Islam miss out on better understanding the diverse world they live in. Restricting knowledge and shielding kids from perspectives not matching their own doesn't just dissuade them from thinking critically; it also fails to prepare them for a changing United States — one where hostility against Muslims seems to grow by the day.

These proposed standards still have to be approved by the nine elected members of Tennessee's State Board of Education next year. But if that happens, they will take effect for the 2019-2020 school year. After that, local districts will build their curriculums around them, according to the board's communications director, McKenzie Manning.

"The state board is charged with approving standards, not curriculum," Manning said. "Curriculum is [now] set by local districts."

It's compelling to watch the dispute unfold, especially considering the state's unique history with Islam. By any measure, it's been a tumultuous ride for American Muslims in Tennessee. The Volunteer State was a safe haven for Muslim-Iraqi Kurds fleeing Saddam Hussein's brutal regime in the early 1990s, and Nashville now houses the nation's biggest Kurdish population, according to BuzzFeed's David Noriega.

It wasn't until the aftermath of 9/11 that Tennessee — like much of the United States — saw more heated battles fueled by religious and ethnic intolerance. The Islamic Center of Columbia, the only mosque within 100 miles of Nashville, was burned to the ground in 2008 when three white men threw Molotov cocktails at the house of worship after painting swastikas and "White Power" on its walls. On June 4, 2013, anti-Muslim protesters cheered during an Islam outreach forum when a Muslim speaker mentioned the burning of the mosque.

In a series of recent cases, fears of "creeping Sharia law" and the construction of mosques — most notably a 2010 campaign to expand the Islamic Center of Murfreesboro — have become heated topics of debate in local and state legislatures. With the rise of Donald Trump in the 2016 presidential election season, these tensions and outright bigotry have persisted with new intensity — and not just in Tennessee.

All of this has combined to help dehumanize, and often endanger, Muslims in the state — an effect that can't be separated from the debate happening around Tennessee's schools. But the fact it is being debated in the first place speaks to significant pressure placed on the education board from multiple angles.

According to David Bartlett, a member of the state recommendation committee appointed by the governor and confirmed by the Tennessee House of Representatives, more than 14,000 feedback submissions have been posted to a Tennessee Education Standards Review online survey over the last year demanding that coursework on Islamic history be rewritten or removed from textbooks.

"The biggest concern about the teaching of Islam with middle school students was that parents were concerned their students were going to be indoctrinated into Islam," Bartlett said.

The standards review page does allow anyone from anywhere to give feedback or suggest amendments in the standards for Tennessee's public schools — making it open to corruption by organizations and individuals outside the state hoping to promote their agendas.

But Gill admitted to encouraging these efforts among his own followers, and supplementing them with rabble-rousing events in various rural Tennessee communities.

"These events helped manufacture the outcry that eventually led to the early review of our state's social studies standards," said Paul Galloway, the executive director for the American Center of Outreach, a nonpartisan organization that encourages Tennessean Muslims to participate in civil engagement.

These local efforts are being bolstered by a broader national anti-Islam movement, led by people like Bill French. French — a self-described "expert" on political Islam and a doctor of physics and math — is one of the loudest voices perpetuating the Islamic "indoctrination" theory.

French has reportedly written an e-textbook — under the pseudonym Bill Warner — that several White County citizens, teachers and parents have pushed as an alternative text in place of Pearson's materials. The book purports to expose the "real brutal truth" about Islam — namely that it is a political system, not a religion, and that violent extremists like ISIS and al-Qaida are more accurate representations of its practices than peaceful, law-abiding Muslims.

French says he is not directly involved with Gill's efforts. But he does take pride in having been called "America's top Islamophobe" by the Council of Islamic Relations, and is listed by the Southern Poverty Law Center as one of 10 influential anti-Muslim core group hardliners.

"If I was the czar of education, I would want students to know the full story of Muhammad and the Quran," French said. "I'm not against Islam. I am against half-truth."

French has also banded together with anti-Muslim activists and organizations like Brigitte Gabriel, Pamela Geller and the conservative American Center for Law and Justice to sponsor and promote the efforts of anti-Islamic indoctrination groups across the country — groups like Gill's Citizens Against Islamic Indoctrination.

They have done so by launching a series of textbook reform initiatives, lobbying state boards of education across the country like Gabriel's ACT for America, and spreading rumors of alleged "Islamic indoctrination."

In light of these efforts, Galloway, the American Center of Outreach director, finds it troubling that so many self-described "experts" are using fearmongering tactics to influence Tennessee's public education system.

"Tennessee is chock full of fearmongers who masquerade as 'experts' on Islam and Muslims," he said. "In reality these folks are nothing more than self-styled pundits who have no academic training in history or religious studies."

Mark Potok, a senior fellow at the Southern Poverty Law Center and a scholar on extremism, said the arguments put forth by anti-Islam activists like Gill, West and French are ludicrous.

"All of these people are simply engaging in a defamation of Islam," Potok said. "They're paranoid nuts who believe that Muslims are engaged in a massive conspiracy to Islamize the United States."

As for which way the state board of education will swing next year? It's hard to say. According to Manning, the recommendation committee is debating changes to the proposed standards. The state board members won't be able to see the draft until the committee finalizes it next spring, at which point they'll make a decision. Until then, the future remains uncertain.

Gill, for his part, is pleased with the progress he's made. He insists, despite it all, he isn't too concerned about middle schoolers in Tennessee converting to Islam per se. He's just outraged at the double standard on the way Islam was once taught in schools compared to how Christianity is taught.

"The problem is that you're not teaching Bible verses," he said — once again, seemingly devoid of factual evidence. "You're not teaching John 3:16, we're not teaching that Jesus is the way and the light and the truth. There's no other way to the Father, but through Him. Why the double standard?"