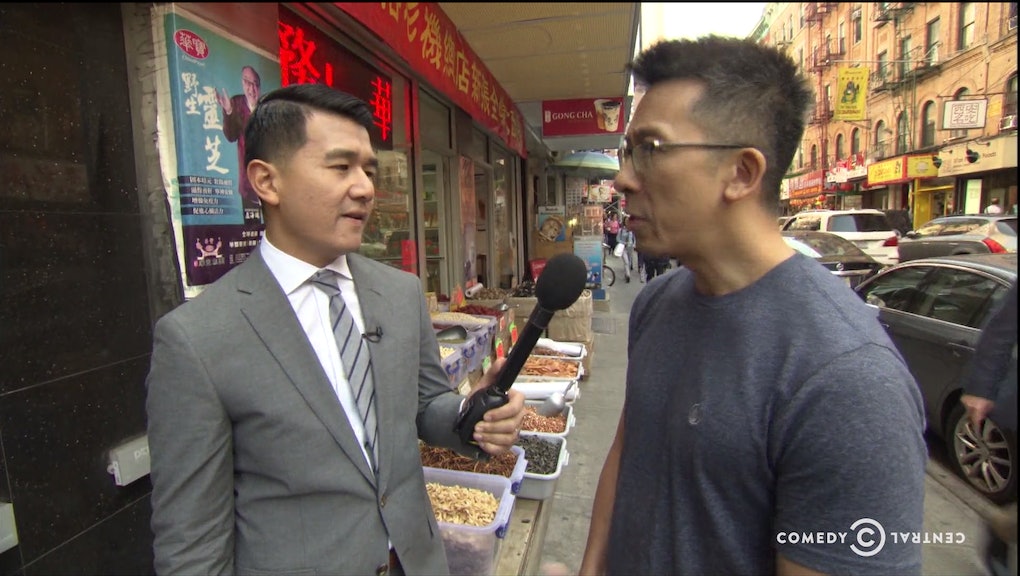 Fox News' consistent attempts to turn The Daily Show's style of humor against them has typically come in the form of Watters' World, a monthly segment from The O'Reilly Factor's Jesse Watters. The host addresses inane topics like PC culture and millennials, complete with choppy editing and brazen questions. But his latest segment, in which he asks people in Chinatown about the upcoming presidential election, was blasted online for perpetrating racist stereotypes with the juvenility of a frat boy.

Thursday, Daily Show correspondent Ronny Chieng addressed the video — at first, playing a portion from the segment, including when Watters asked one man if it was the year of the dragon or rabbit.

"No, it's actually the year of go fuck yourself!" Chieng responded.

"If you're going to be racist, at least get your stereotypes right, you ignorant sack of shit," Chieng continued. "Karate isn't Chinese — it's Japanese — and you're doing it in a Tae Kwon Do studio, which is Korean, you fucking jackoff."

Chieng noted that it was easy for Watters to bully some of his interviewees, as it was clear some of them couldn't speak English. Since it's "easy to make fun of someone when they can't respond," Chieng did the same for Watters by throwing photos of the correspondent on-screen.

To prove his point, Chieng went down to Chinatown to chat with people — speaking to some in English, and others in Chinese. At one point, he asks one informed woman speaking Chinese why she's so well-versed in American politics.

"I'm from Queens!" she responds in English.

But the best response came when Chieng asked a man what he thought about Watters and his segment.

"The chickenshit reporter who came here and thought he was big shit because he talked to people who couldn't speak English?" he says to Chieng. "The one who was sent here by the larger chickenshit who wouldn't come into Chinatown because he was afraid to do it himself? ... The one with no testicles? The one who came down here, who said, 'Let me talk to some old people and let me put them on camera without asking them and sort of put them on national television and made fun of them in the worst possible way?' That asshole?"

You can check out the segment from Thursday's Daily Show here.