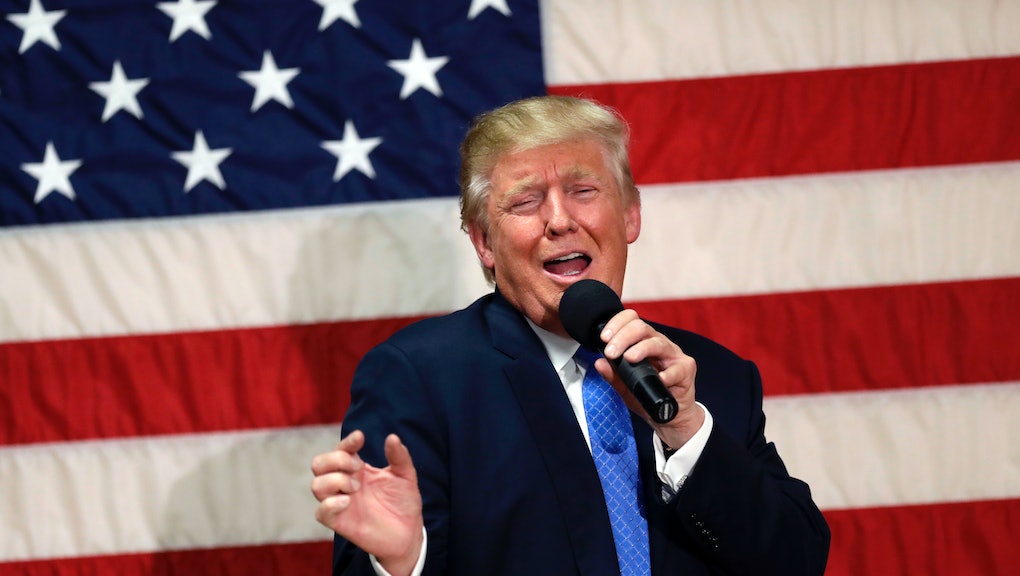 Donald Trump has said he "cherishes" women — but a lewd, crude hot-mic conversation that surfaced Friday probably won't win him any Feminist of the Year trophies.

A 2005 tape published by the Washington Post captures the Republican presidential nominee bragging that celebrities can treat women any way they please.

"Grab them by the pussy," Trump says on the tape. "You can do anything."

The real-estate magnate's expletive-larded rant, according to the Post, took place during an exchange with Billy Bush of Access Hollywood as the two appeared on the set of the soap opera Days of our Lives.

The raunchy revelation prompted a highly unusual near-apology from Trump:

While he acknowledged the remarks — signaling the campaign's awareness that this could be a big problem just days before Trump meets Hillary Clinton in their second debate — his regrets were hedged.

He also managed to get in a jab at his rival's husband.

"This was locker room banter, a private conversation that took place many years ago," Trump said. "Bill Clinton has said far worse to me on the golf course — not even close. I apologize if anyone was offended."

Clinton assailed Trump on Twitter with a link to the Post story, calling the details "horrific" and adding, "We cannot allow this man to become president."

The graphic tape — captured just months after the GOP nominee married his third wife, Melania — includes Trump speaking at length about hitting on an unidentified woman.

"I did try and fuck her. She was married," Trump is heard telling Bush.

He continues, per the Post recording, "And I moved on her very heavily. In fact, I took her out furniture shopping. She wanted to get some furniture. I said, 'I'll show you where they have some nice furniture.'"

But there was more:

"I moved on her like a bitch, but I couldn't get there. And she was married. ... Then all of a sudden I see her, she's now got the big phony tits and everything. She's totally changed her look."

Trump also apparently had an eye for Arianne Zucker, who was to lead him to the soap's set.

"I've gotta use some Tic Tacs, just in case I start kissing her," Trump says. "You know I'm automatically attracted to beautiful — I just start kissing them. It's like a magnet. Just kiss. I don't even wait."

Trump is already under heavy fire from Clinton and other detractors for having slammed women as "dogs" and for fat shaming former Miss Universe Alicia Machado.

The latest revelations are sure to provide more fodder for those who think Trump has an astonishingly bad way with women.

"What Trump described in these tapes amounts to sexual assault," Laguens said in a statement. "Trump's behavior is disgusting and unacceptable in any context, and it is disqualifying for a man who is running for president of this country."

The story hit just a day before House Speaker Paul Ryan was to make his first campaign-trail appearance with Trump in Wisconsin.

Ryan, the 2012 ticketmate of Trump critic Mitt Romney, initially held off on pledging his support to the GOP's standardbearer, and has previously lambasted some of the nominee's race-fueled rhetoric as "indefensible."

A Ryan spokesman did not immediately respond to a request for comment.

The last thing the speaker tweeted before the Post story hit was a photo of himself signing legislation to protect sexual assault survivors.

Republican National Committee Chairman Reince Priebus, who's also from Wisconsin and slated to appear with Trump this weekend, Friday evening released a terse statement condemning the nominee's remarks — if not the man himself.

Neither his nor Ryan's office would immediately say whether they'd pull out of the Trump campaign stop.

Later Friday night, Ryan — without retracting his pledge to support his party's candidate — said in a statement that he was "sickened" by Trump's remarks and that the nominee would not be appearing with him in Wisconsin.

Trump quickly blasted out a response, saying he'd spend the day with Priebus and others in debate prep while running mate Mike Pence represented him at the Ryan event.