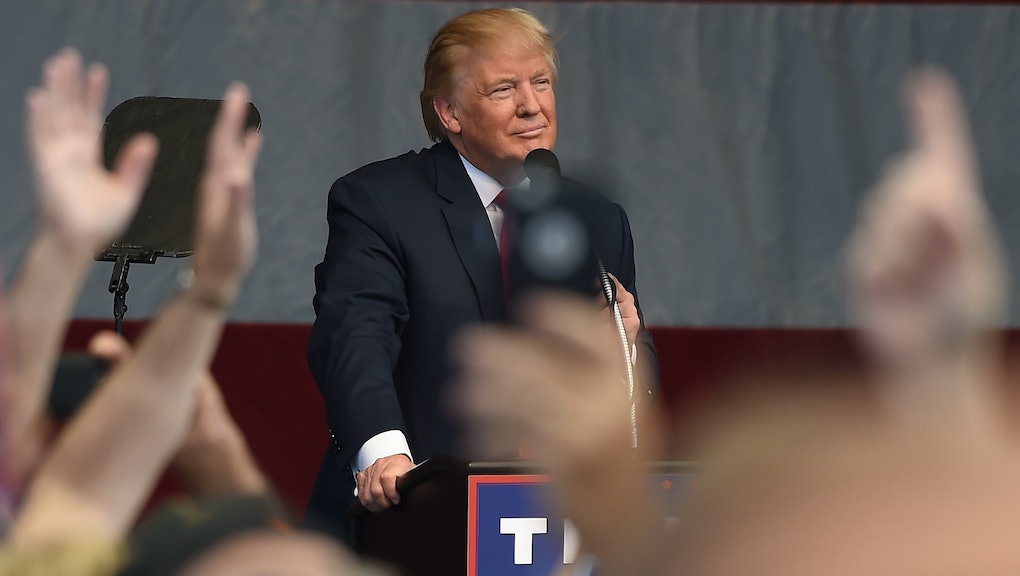 A video leaked by the Washington Post on Friday reveals Donald Trump making sexist and vulgar statements in a conversation with Billy Bush of Today and Access Hollywood. The audio was captured in 2005 ahead of Trump's appearance on the soap opera Days of Our Lives.

It isn't news that Trump made sexist comments — he has most recently come under fire for his remarks about former Miss Universe Alicia Machado. Hillary Clinton called out Trump during the debate for calling women "pigs, slobs and dogs." Trump is "someone who has said pregnancy is an inconvenience to employers," Clinton added.

But the comments in the tape obtained by the Post are possibly the most vulgar, misogynistic statements to come to light during this election.

"I moved on her like a bitch, but I couldn't get there. And she was married," Trump is heard saying in the video. "Then all of a sudden I see her, she's now got the big phony tits and everything. She's totally changed her look."

"Grab them by the pussy," Trump is also heard saying. "You can do anything."

Read the full transcript below:

Donald Trump: You know and I moved on her actually. You know she was down on Palm Beach.

Unknown: She used to be great. She's still very beautiful.

Trump: I moved on her and I failed. I'll admit it.

Trump: I did try and fuck her. She was married.

Bush: Sheesh, your girl's hot as shit. In the purple.

Bush: Yes! The Donald has scored. Whoa, my man!

Trump: Look at you. You are a pussy.

Trump: Maybe it's a different one.

Trump: Yeah, that's her. With the gold. I better use some Tic Tacs just in case I start kissing her. You know I'm automatically attracted to beautiful — I just start kissing them. It's like a magnet. Just kiss. I don't even wait. And when you're a star they let you do it. You can do anything.

Bush: Whatever you want.

Trump: Grab them by the pussy. You can do anything.

Bush: Yeah those legs, all I can see is the legs.

Trump: It's always good if you don't fall out of the bus. Like Ford, Gerald Ford, remember?

Bush: Down below. Pull the handle.

Trump: Hello, how are you, hi.

Arianne Zucker: Hi Mr. Trump. How are you?

Bush: Hello, nice to see you. How you doing, Arianne?

Zucker: I'm doing very well, thank you. Are you ready to be a soap star?

Bush: How about a little hug for the Donald? He just got off the bus.

Bush: How about a little hug for the Bushy? I just got off the bus. Here we go. Excellent. Well you've got a nice co-star here.

Trump: Good. After you.

Bush: Soon as a beautiful woman shows up he just, he takes off. This always happens.

Bush: Let the little guy in here, come on.

Zucker: Yeah, let the little guy in. How you feel now? Better? I should actually be in the middle.

Bush: It's hard to walk next to a guy like this. Yeah, you get in the middle. There we go.

Zucker: This is much better. This is —

Bush: Now, if you had to choose honestly between one of us. Me or the Donald?

Zucker: That's some pressure right there.

Bush: Seriously, you had to take one of us as a date.

Zucker: I have to take the Fifth on that one. Yep, I'll take both.

Bush: Here he goes. I'm gonna leave you here. Give me my microphone.