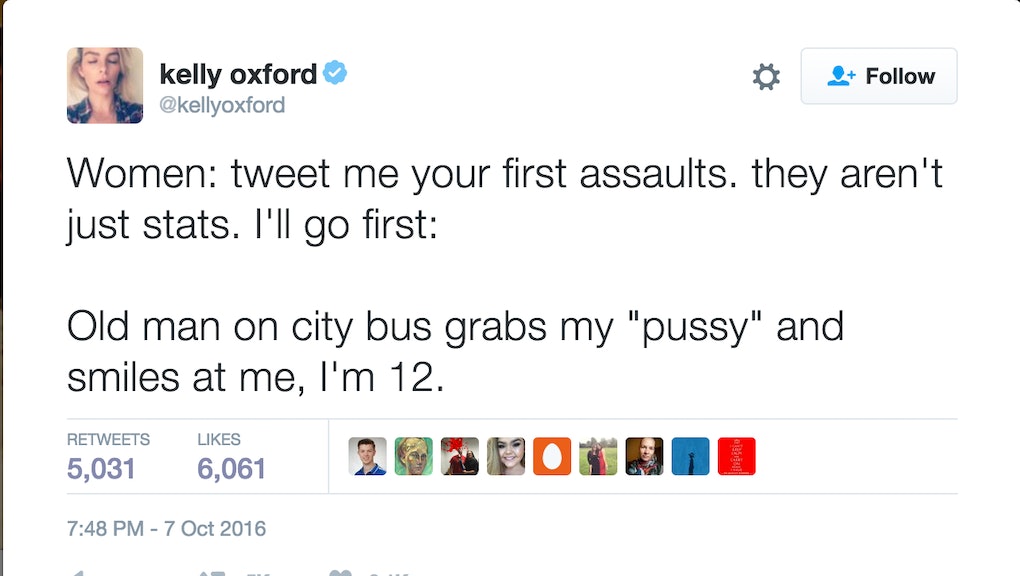 After misogynistic #TrumpTapes leaked, women are sharing stories of their sexual assault

Friday afternoon, leaked audio tape revealed Donald Trump in a crude, aggressive conversation that captured the Republican presidential nominee bragging that his celebrity status gave him special permission to grope and grab women as he pleased.

"Grab them by the pussy," Trump says on the audio clip. "You can do anything."

Friday evening, after swift social media outrage and a rare apology from the candidate, some women online responded to the controversy by sharing their earliest memories of sexual assault. Author Kelly Oxford wrote, "Tweet me your first assaults. They aren't just stats. I'll go first: Old man on city bus grabs my 'pussy' and smiles at me, I'm 12."

Each story highlights one important fact. Women experience sexual assault at a much younger age than most people think. Most of the stories tweeted occur at pre-pubescent or pubescent ages and are perpetrated by much older men.

As Mic's Jenny Kutner previously pointed out, Trump's attitude of male entitlement is an underpinning of rape culture on college campuses and beyond.

In a survey of over 2,000 full-time and part-time female employees, Cosmopolitan found that 81% experienced verbal sexual harassment at work, while 44% say they've experienced unwanted advances and touching — the kind of groping Trump boasts as being easy.

It's important to note that not only women experience sexual harassment: People of any gender can be harassed. But Trump's tape highlights the cavalier way men discuss women's bodies in private — and can still think they're worthy enough to run for the highest American office.