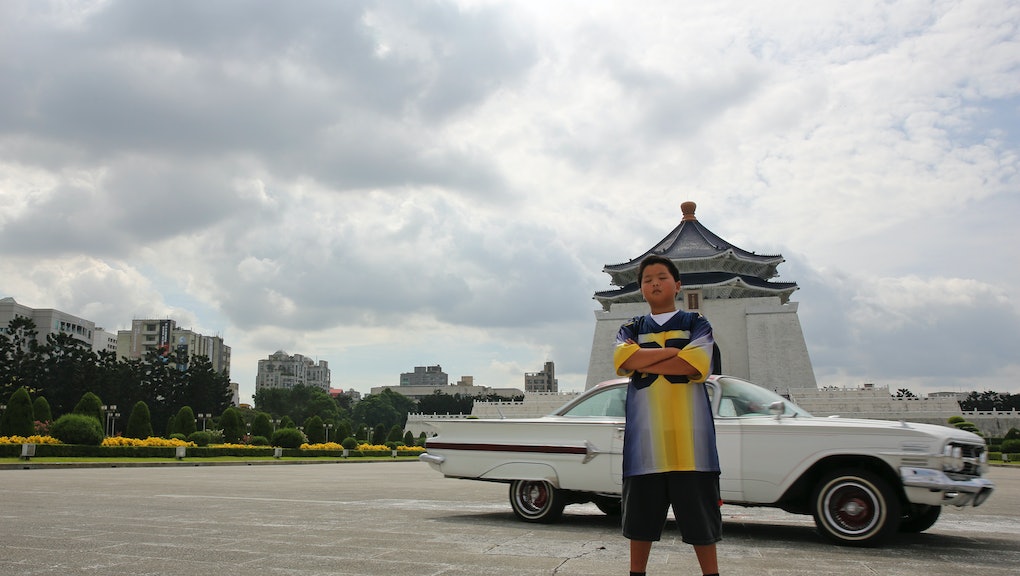 'Fresh Off the Boat' Season 3 Premiere: Home's where the Huang is in "Coming From America"

"I'm home," Jessica says wistfully as the Huangs pass through customs in Taipei, Taiwan. She feels back among her own kin as she checks off the box on her declaration form marked "brother-in-law who wronged me" as her reason for visiting. The question is: After being away so long and starting a family of her own, has time actually been so kind to Jessica's beloved motherland?

"Coming From America," the first episode in Fresh Off the Boat's third season, answers that question with a firm "yes, but no, but sort of — perhaps?"

The Huangs' trip to Taiwan was born out of the events of the season two finale "Bring the Pain" — in which Louis and his twin brother Gene (guest star Ken Jeong) had a combative reunion in the lead-up to Gene's forthcoming wedding. Shortly after asking Louis to be his best man, the source of the brothers' resentment for each other (beforehand referred to only as "the hot springs incident") is brought to light: Their father had amassed enough money to send one of the two brothers to live in the United States.

After a few rounds of telling the other to take the offer, Louis accepted, bringing a quick end to what Eddie identifies as a "Chinese polite fight" — which is, of course, a no-no. Angered by this latest iteration of their unresolved argument, Gene absconds in the night, wheeling their mother along with him and rescinding his best man offer to Louis via a note left on his bed. Thus the season three setup was established: The Huangs are off to Taiwan to set things right!

The cliffhanger-of-sorts-ending to season two was amusingly outside the norm for Fresh Off the Boat, and how quickly and abruptly Louis and Gene's conflict is resolved makes it all the funnier. Upon meeting up with Gene at the Grand Hotel, Louis assuages his brother's anger by detailing how much money this trip, and thus Gene's forgiveness, cost him — winning him over bit-by-bit by noting he shelled out for a nonstop trip with economy-plus seating, and finally sealing the deal with the purchase of a $4.99 pair of headphones to watch The Truth About Cats and Dogs during his flight.

But as money is solving the brothers' problems, similar tactics prove futile for Eddie, whose main concern throughout the trip is getting a fax to his boo, Alison — worried she'll be stolen away by some smooth-talking Kinko's employee when there's no fax waiting there for her. He tries to grease his way into the adults-only business center to use their fax machine by slipping the concierge a whopping $3 USD, asking "so, is that a lot to you... or not a lot?" with the sort of naive inquisitiveness and bravado combo that is his trademark.

Within Eddie's question lies the conflict at the heart of "Coming From America": Would the Huangs' successes amount to a lot compared to a life in Taiwan... or not a lot? Gene may be successful now, but we learned last season that he's still harboring resentment against Louis for co-opting the chance to forge his own path in the United States.

Further, for Gene, achieving success required giving up a great deal of agency. He had to give up on his old passions — like his band (Gene Huang's Ragtime Explosion) and vacuum company (Gene Huang Suck City) — which are now coldly regarded as ill-conceived failures from a time before Gene got his act together and began studying to become a pilot. But, had he migrated to the U.S. in Louis' place, who's to say Gene Huang Suck City couldn't have been his Cattleman's Ranch?

Of course, the grass is always greener, so Louis, Jessica and the kids are all wowed by the glamorous life that Gene and his fiancé Margaret, herself a successful actress, have built. They visit Gene and Margaret's lavish home in the penthouse of a building that they own — a place so nice that it prompts Evan to ask "Dad, are we poor?" to which Louis answers, "American middle-class is like Taiwan-rich." Even mild-mannered Emery can't help but respond with an Eddie-ish sentiment: "I'd rather be Taiwan-rich."

Taiwan-rich, we eventually learn, comes with its share of sacrifices. Even Jessica, a character largely defined by the pride and fervor she has for her roots, quickly grows sick of her time in Taiwan. She's been eagerly anticipating a trip to the Shilin Night Market, even traveling with an empty suitcase so she can cram a full year's worth of shopping into their trip, but it turns out she's forgotten all the old tricks. She scores a great deal from a storefront on a pair of Jordans — the "basketball heels" Eddie's been talking about since last season — but the knockoff shoes fall apart within just a few steps. It turns out Jessica's forgotten a cardinal rule: "The good fakes" are never at the storefront — they're always at "the second location."

The kids are left mostly on the periphery of this episode — understandably so, as their stake in this trip is far less personal. For Louis and Jessica, this is a trip to the homeland. But for Eddie, Emery and Evan? They're on vacation (especially Evan, who's come prepared with a travel bag and guidebooks packed with historical factoids).

Echoing most kids' feelings on family vacations, they're more than ready to pack up and head home by the trip's end: Eddie's eager to see Alison after failing to fax her all week, Emery's face is covered in mosquito bites and Evan's excitement over the year-round school of Taiwan — which is something straight from his Wish Journal, apparently — fades upon learning how strict the teachers are. It's never brought up while the kids are present, but it's safe to assume they wouldn't be on board with Louis' idea of packing up and heading east.

Of course, it's all moot; Taiwan is no longer Louis or Jessica's home for a reason. They met and started their family in Chinatown in Washington, D.C., and left that home behind so Louis could open his own business in Orlando, Florida. Clearly, the status quo in Taiwan was neither what Louis nor Jessica wanted when they left for the U.S., and seeing the smooth road to success they could've achieved through tricks, shortcuts and family favors only served to highlight the successful life they've built from scratch in Orlando.

Taiwan will always be an important part of the Huangs' past, especially for Jessica. And the U.S. remains an important part of their future, especially for Louis. As Louis ultimately realizes, just like in Taiwan's favorite film, Ghost — and its lesser-known sequel, Ghost 2: The Story of Gene and Margaret — they're "stuck between two worlds: part of both, belonging to neither."