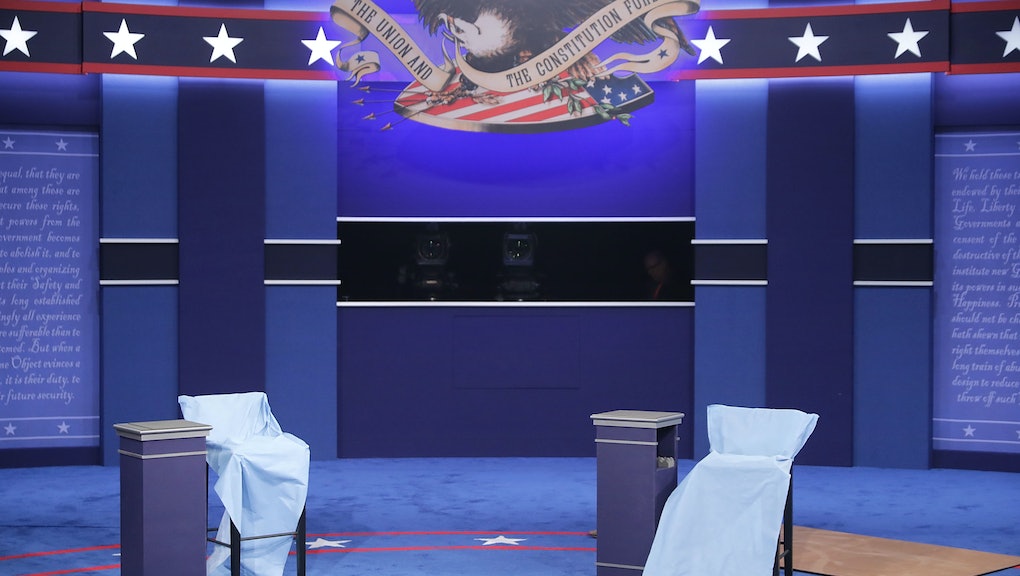 On Sunday Oct. 9, Republican nominee Donald Trump and Democratic nominee Hillary Clinton will face off for their second presidential debate in St. Louis — and somehow, the stakes are even higher than their first round, which Trump was widely viewed as losing in a landslide.

Polls show the Republican nominee was deep in trouble even before the Friday release by the Washington Post of a 2005 video showing Trump bragging about how his fame enabled him to grope and kiss women without repercussions. The weeks since the prior debate have been brutal for Trump, who saw exposés about his signature family charity, mockery from his opponent for a 3:00 a.m. Twitter "meltdown," and numerous retractions of support from other high-profile Republicans.

Here's a running fact-check of the debate.

In his answer to moderator Anderson Cooper's question on whether Trump understood that his remarks on the tape could only be read as bragging about sexually assaulting women, Trump repeated his previous characterization of the event: "No, this was locker room talk."

He then attempted to turn the topic to ISIS, before reiterating when challenged again: "I have great respect for women."

Cooper asked him bluntly: "Have you ever done those things?"

Trump responded, "No, I have not."

Unfortunately for Trump, the accusations were substantiated by testimony from numerous former colleagues who witnessed him acting crudely towards female contestants on The Apprentice, as well as other women who came forward with allegations they were assaulted by Trump.

Trump, who was an aggressive leader of the birther movement which insisted President Barack Obama was actually born in Kenya, is not a U.S. citizen, and thus is an illegitimate president, repeated a common misrepresentation of the origins of the theory.

"Your campaign's Sidney Blumenthal, another real winner that you have. He got this started, and your campaign manager was on TV saying that two weeks ago," Trump said. "Sent the pictures around with President Obama in a certain garb. So, you actually owe an apology."

Numerous fact checks have concluded the Clinton campaign did not, in fact, launch the birther movement; while then-Clinton aide Mark Penn did circulate a memo questioning whether the campaign could portray Obama as "not at his center fundamentally American," Clinton insists the memo (and the advice) was disregarded. Blumenthal was likely involved in alerting McClatchy DC reporters to the initial rumor, although he was not an official member of Clinton's campaign, and the conspiracy theories predated Blumenthal's involvement.

Trump repeatedly insisted he was against the war in Iraq. But in 2002, before the war began, when radio host Howard Stern asked him if he supported overthrowing Saddam Hussein's government, he responded: "Yeah, I guess so."

9:52 p.m.: Trump insists he was endorsed by U.S. Immigration and Customs Enforcement.

Trump repeated a claim that he was endorsed by ICE. That would be big if true, seeing as ICE is a federal agency whose director, Sarah R. Saldana, is an Obama appointee.

Trump was actually endorsed by a union of ICE employees, which is not the same.

In August, economists told the Washington Post those details of Trump's tax plan which had been released actually indicated he was more concerned with lowering taxes for wealthier taxpayers. According to Slate, another analysis of Trump's tax plan by the conservative Tax Foundation found that middle-class taxpayers would get "very little, while upper-income Americans reap a windfall."

Clinton's tax plan, however, mostly targets the very wealthy for $1.9 trillion in revenue increases over the next decade, according to the Wall Street Journal: "The brunt of that impact would fall on a sliver of the population, with nearly 80% of the higher taxes hitting the top 1% of households and more than half hitting the top 0.1%, according to the Tax Policy Center."

In fact, the U.S. and its partners in the coalition forces have launched numerous special operations raids and air strikes on ISIS strongholds and leaders — attacks which often rely upon the element of surprise to succeed.

In August, the commander of the U.S. campaign against ISIS in Iraq and Syria, Army Lt. Gen. Sean MacFarland, said in a briefing the U.S had killed over 45,000 ISIS fighters in the past two years.

It's not clear where Trump's statistic came from. But according to the Washington Post, the Kaiser Family Foundation estimates a quarter of the black population is living in poverty, a similar number to Hispanics: "Most black Americans don't live in poverty, just as most white Americans don't."

10:43 p.m.: Clinton misleads on security of her private email server.

Clinton offered a misleading picture of whether the much-criticized private email server operating during her tenure as secretary of state was totally secure.

As the Associated Press noted, Clinton's server actually "appeared to allow users to connect to it openly over the internet and control it remotely ... Clinton hasn't fully explained who administered her server, if it received software updates to plug security holes or if it was monitored for unauthorized access."

No proof has emerged as to whether anyone unauthorized did in fact access the server, but FBI Director James Comey called Clinton "extremely careless" in the handling of that information.

This is a breaking news story and may be updated.