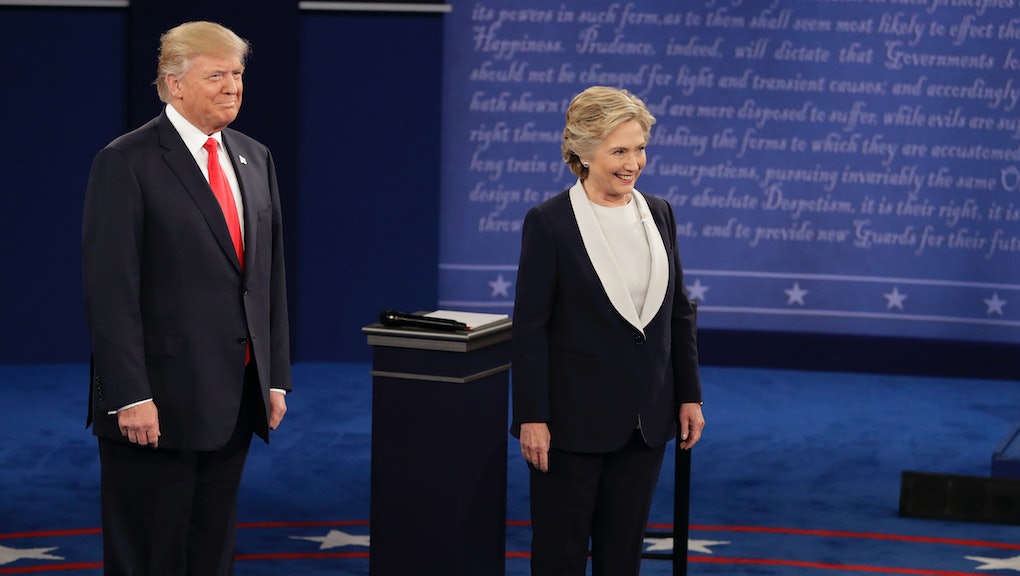 Who won the debate? Viewers weigh in on the Trump vs. Clinton presidential showdown.

From the start, Donald Trump and Hillary Clinton set the tone of a debate that proved to be among the most divisive and vitriolic in American history. The two presidential candidates strode to center stage and did not shake hands.

From the first question — "Do you feel you're modeling appropriate behavior for today's youth?" — the candidates moved to attacking each other's policies and rhetoric.

What the pundits said about the second presidential debate

Anderson Cooper pressured Trump to address audio that was released by the Washington Post on Friday that threw his campaign into a firestorm of criticism. In the tape, Trump bragged of grabbing women "by the pussy." He chalked the comments up to "locker room talk" and said he regretted his words. But Trump did not consider his remarks as condoning sexual assault, he said — before pivoting to his proposals to fight the Islamic State group, also known as ISIS.

Clinton did not let the GOP nominee off the hook. She said that throughout the campaign, he has "insulted," "ranked" and "denigrated" women. Many felt her response was powerful.

As Trump continued to face questions regarding the tape, he pivoted to Bill Clinton's alleged history of sexual assault and harassment.

Unlike in the first debate, Trump hammered Clinton again and again on the same scandals that Republicans have used to attacked Clinton throughout the campaign. One in particular? Email. Trump said if he is elected, he would appoint a special prosecutor to investigate whether Clinton broke the law in deleting thousands of emails.

The debate hung on emails for several minutes, which included jeers and cheers from the audience, and the candidates sparred aggressively.

Debate moderators Cooper and Martha Raddatz forced Trump to move on from the email issue; the conversation pivoted to the Affordable Care Act, also known as Obamacare. The candidates were challenged to answer what they would do to bring down the cost of health care. Clinton said she would amend what works about the law while keeping much of it in place. Trump said Obamacare must be "repealed and replaced," saying premiums are increasing too rapidly.

As the debate continued, GOP pollster Frank Luntz suggested Trump was having a better night than Clinton.

When Trump was asked whether he still supported a ban on Muslims entering America, he said he has called for "extreme vetting."

The debate moved to taxes, wherein Trump suggested he may have gone some years without paying federal income tax. But he said Clinton is "all talk" when it comes to changing the tax code to benefit the middle class. Clinton countered that the Trump plan gives away a tax break to wealthy Americans and corporations.

The discussion then moved to Syria, a topic Trump and Clinton are both often happy to discuss. Clinton touted an anti-Russia strategy she said will be built on her international experience as secretary of state. Trump said instability in the Middle East was largely the fault of foreign policy implemented under Clinton. He also said he disagreed with his running mate Mike Pence and that Aleppo "has fallen."

The debate closed with a discussion about differing personalities. An audience member asked the candidates if they felt they could represent all Americans. Trump and Clinton attacked each other relentlessly from there.

The last question posed to each candidate: "Would either of you name one positive thing you respect in one another?"

Immediately post-debate, it was too early to tell who won. But that did not stop journalists, pundits and politicians from offering their hot takes on the debate.