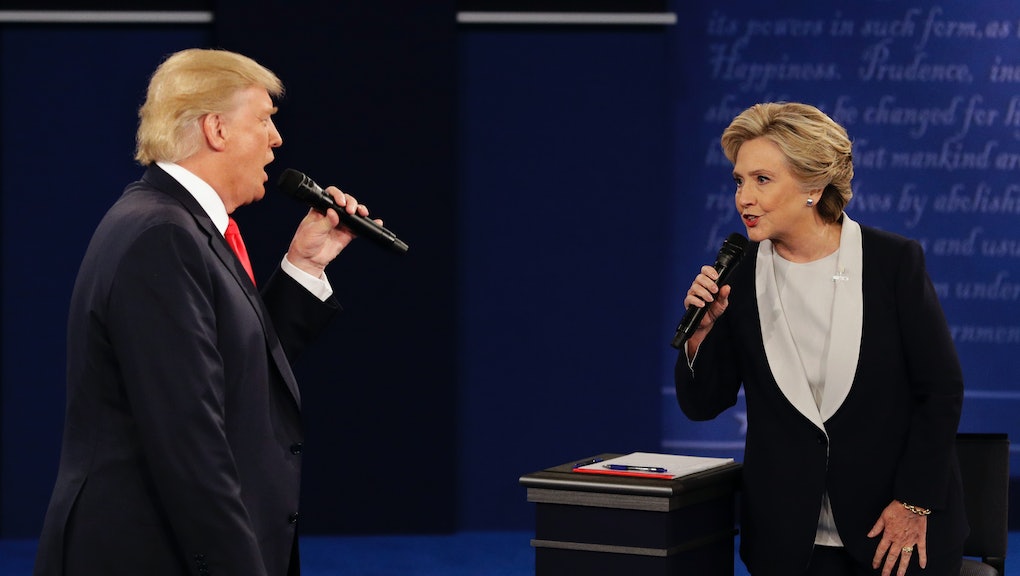 Who's winning the election? Here's how the second presidential debate affected the race.

The second presidential debate, a town hall-style exercise in patience for Hillary Clinton and in level-five lurking for Donald Trump, ostensibly existed to help undecided voters make up their minds. Instead, many of them felt alienated and disillusioned by the tone of Sunday's exchange, according to the Wall Street Journal.

As illustrated by the below tweet, Trump's creative characterizations — of his opponent as "the devil," for example — seemed to leave at least one viewer feeling skeptical and affronted, a tidy summary of the election so far.

Still, Democratic nominee Clinton managed to establish an edge over Trump amongst the undecided, according to one post-debate poll. YouGov surveyed 812 registered voters who tuned in for the smackdown, and found that Clinton came out ahead by a five-point margin: 47% of respondents named Clinton as the winner, compared to 42% who called it Trump's night. Clinton also won among undecided voters, 44% to 41%.

However, the majority of YouGov's participants (57% to 31%) deemed Clinton's demeanor "more presidential," flying in the face of Trump's previous declaration that his female opponent lacks the requisite "presidential look" to occupy the Oval Office.

Results from a CNN/ORC poll suggested Trump "exceeded expectations," but not nearly enough to declare him the winner — 57% of respondents named Clinton the victor, versus 34% who picked Trump.

As of Monday morning, Nate Silver of FiveThirtyEight, which has historically been very accurate in its election predictions, forecasted that Clinton will win the general election 82% to Trump's 18%. We'll see.

In Mic's estimation, Trump didn't win the debate, but he didn't exactly lose, either. Rather, he lied, loudly; he dodged questions; he revealed some worrisome gaps in his understanding of policy, but he didn't implode the way his party feared he would.

The debate left some viewers with a very weird feeling, as if they were just screaming into the void. The end game? Basically, this: