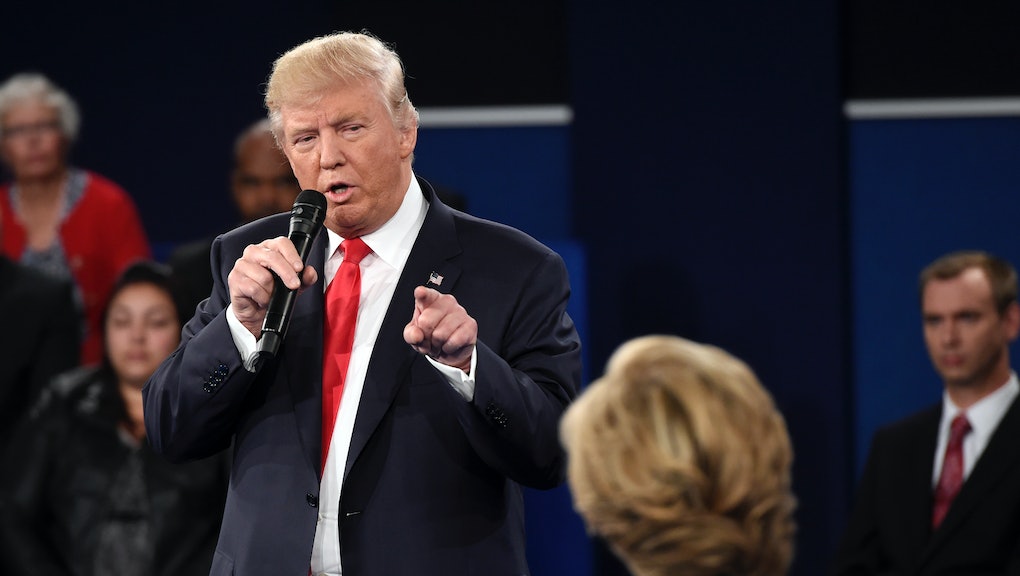 Donald Trump didn't win the second presidential debate. But he didn't lose it either.

By every conventional metric — substance, style and (so far) scientific polls — Hillary Clinton notched a second consecutive debate victory on Sunday night, capitalizing on the furor over Donald Trump's predatory comments about women and visibly irritating the notoriously volatile Republican nominee throughout their 90-minute encounter.

Still, Trump accomplished about as much as he could realistically have hoped, given the increasingly steep odds confronting his improbable candidacy.

Entering the town hall-style forum in St. Louis a little more than an hour after a press conference featuring three women who allege that former President Bill Clinton sexually assaulted them, the brash billionaire avoided a full-scale meltdown, and his sharp attacks on Clinton's record likely helped stanch the bleeding of Republican officials following the leak of a 2005 tape in which Trump said his celebrity status entitled him to grope women "by the pussy."

"Hillary was overconfident and less crisp in her arguments about Donald's myriad horrors. Trump was just good enough to keep his vice presidential candidate from defecting. In the end, she's still in position to win decisively," said Republican strategist Tim Miller, a vocal Trump foe.

Trump likely helped rally the Republican base with his jabs at Clinton's use of a private email server, her legal representation of a 12-year-old girl's alleged rapist four decades ago and her private speeches before Wall Street banks.

After Clinton cited former President Abraham Lincoln in explaining her statement — revealed in WikiLeaks' publication of her financial industry speech transcripts — that political leaders must occasionally take one position publicly and another privately, Trump landed what may go down as among his more memorable one-liners in his debating career.

"She lied. Now she is blaming the lie on the late great Abraham Lincoln. That's one,"  Trump said. "Honest Abe never told a lie, that's the big difference between Abraham Lincoln and you."

But while such acerbic attacks may have cheered even Trump skeptics in the GOP, he did little to broaden his base of support Sunday night — and may have further repelled women and swing voters by describing his boasts about sexual assault as "locker-room talk."

"I doubt he picks up any women," Democratic strategist Mary Anne Marsh said.

Moreover, Trump revealed himself to be utterly clueless about elementary aspects of foreign policy. Asked how he would deal with the humanitarian crisis in the besieged Syrian city of Aleppo, the political neophyte launched into a blistering attack on Clinton's foreign policy record, calling it a "disaster." Pressed to answer the question posed by co-moderator Martha Raddatz, he could muster little more than classic Trumpspeak.

"I think Aleppo is a disaster. ... I think that basically it has fallen," he said.

Trump lied once again about opposing the Iraq War from its inception, said the Islamic State terrorist group could be defeated simply via "secretive" strikes and egregiously misrepresented the U.S. vetting program for foreign refugees. He falsely asserted that the U.S. is one of the world's highest-taxed countries, and managed, with a straight face, to assert that "maybe there is no hacking" of U.S. information by countries like Russia.

The debate, then, may not have been the catastrophe for Trump that many Democrats gleefully predicted — and his allies deeply feared — but he hardly revealed himself to possess anything resembling a serious understanding of public policy and the demands of the nation's highest office.

The most that can be said for Trump's performance, then, is that he may have helped the GOP avert an all-out bloodbath next month — one that may have ended Republican control not only of the Senate, but also of the House of Representatives, where the GOP majority was once seen as impregnable.

"He can't win unless he has all the Republicans and he picks up women. I look at all the gains as sugar highs. I thought the combination of the tape on Friday and the debate tonight had the potential to be decisive. If he really went after one of the audience members or went after her in a really bullying, berating way, I think the bottom would've fallen out. He didn't do that. [But] with 30 days to go, if you're not moving your poll numbers, you're not winning," Marsh said.