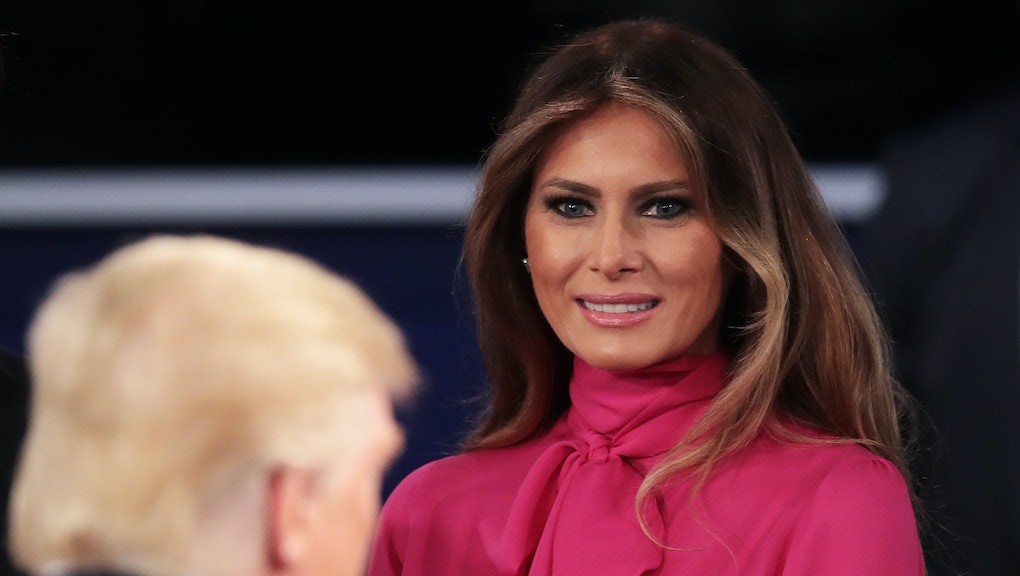 During the debate, Twitter had lots of questions about Melania Trump's pussy bow blouse

It could have been an accident ... right?

Maybe Melania Trump, the wife of Republican presidential nominee Donald Trump, was struck with that shocking shade of fuchsia. Perhaps she thought the blouse was elegant, and the bow at the neck seemed demure. Or it could have been that she simply liked the way it looked on her.

It could have been anything at all, but the fact of the matter is that to the debate on Sunday night, two days after incriminating audio of her husband saying "grab them by the pussy" was leaked, Melania Trump wore a hot pink blouse with what's known as a "pussy bow" at the neck.

Since this did come 24 hours after she herself called the statements on that tape, "unacceptable and offensive," was this Trump officially backing away from her husband? Was this a silent rebellion? Was this her attempt at shade? Was this a subtle #ImWithHer? Was it even a subtle, "I'm divorcing this man the second the election ends"? Or, was this a very quiet, "I leaked the tape, ladies"?

The blouse itself was quickly tracked down by internet users, who found out that the blouse is made by Gucci, goes for $1,100 and is actually called "pussy-bow silk crepe de chine shirt."

(And since we know you want to know, yes, it is still available for purchase.)

That's a lot of money to spend in an effort to shade your husband in front of millions of people, but Melania Trump is Melania Trump, and she's going to wear exactly what she wants, when she wants.

We can only hope that the answer to both of those questions is yes.

Mic has reached out to Gucci in hopes that they might have an idea, too.