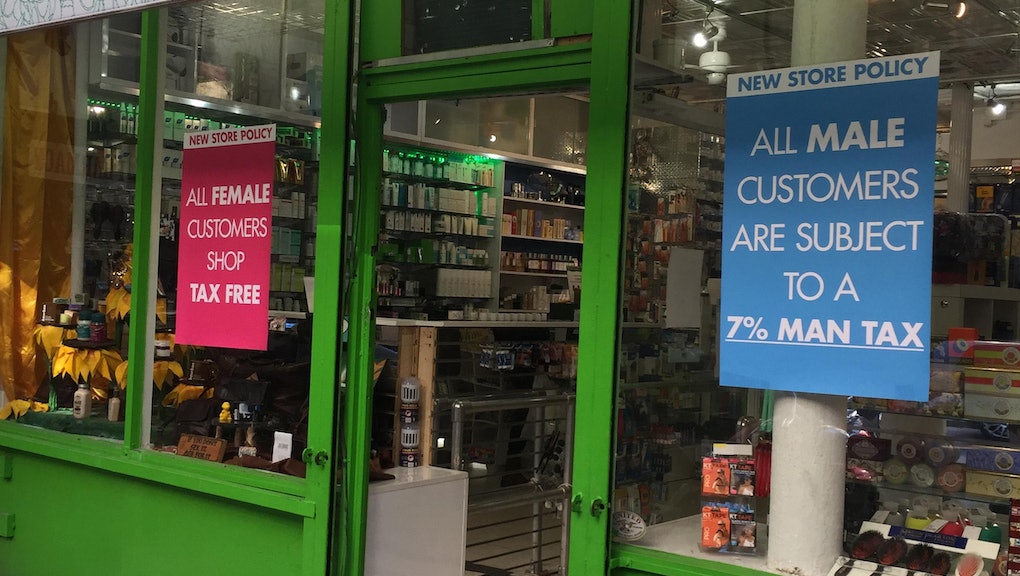 For one day, this NYC pharmacy flipped the pink tax back on men

The so-called pink tax on products and services marketed to women — tampons, dry cleaning, haircuts — means that over the course of a lifetime, women spend thousands more dollar on basic hygiene than men.

Jolie Alony, who co-owns Thompson Chemists pharmacy in Downtown New York City with her husband, saw the opportunity to make a statement about the hypocrisy. So on Monday, they introduced customers to the Man Tax, a 7% fee for male customers only; women shopped tax-free.

"[Women] make less and we have to spend more," Alony explained in an interview. "So we're just trying to show appreciation to women."

Alony and her husband, Gary, opened Thompson Chemists in Manhattan's SoHo neighborhood in 1994, and its sister store, Thompson Alchemists, in 2010. They decided to give women a tax break this Columbus Day "just to raise awareness," Alony said, "between everything going on, between Clinton and Trump."

It's a welcome hat tip for women after after a particularly excruciating weekend that saw Republican nominee Donald Trump's sexism again take center stage. Indeed, the release of old audio in which Trump said he grabbed women by their genitals at will and told shock jock Howard Stern it was OK to call his "voluptuous" daughter a "piece of ass" capped off by an especially vicious debate Sunday night left many women desperate for relief.

A gracious passerby noticed the signs in the window declaring, "New store policy: All female customers shop tax-free" and "all male customers are subject to a 7% tax" and posted the photo to Reddit where users naturally debated the legality of the promotion.

But for her part, Alony said the reception had been "very, very positive," especially among women. Men, she said, had mostly been receptive — except for one who called the pharmacy to demand the signs in the window, advertising the man tax, be taken down immediately; Alony declined.