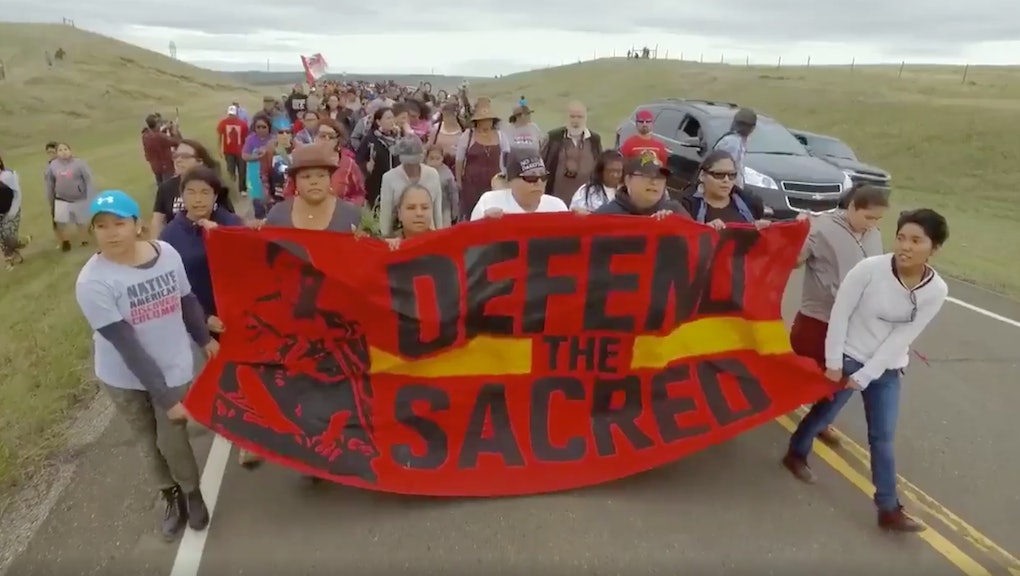 Christopher Columbus was a brutal conqueror, his men slavers and rapists. Yet we still continue to celebrate him with an annual holiday. The hypocrisy of a nation claiming to represent liberty and justice for all celebrating Columbus is legendary, but it's starting to unravel. Twenty-six cities are celebrating Indigenous Peoples' Day instead of Columbus Day this year — and support is only growing.

Frank Waln is adding fuel to this movement for change this Indigenous People's Day. He's a Sicangu Lakota rapper who's been authoring some fascinating mixtures of traditional Lakota music and boom bap. Midday Monday he dropped "7," essentially a dis track aimed at white colonizers and a signal boost to current movements for indigenous rights. Nothing is more necessary listening today.

"This song is about not forgetting who we are and where we come from as indigenous people," Waln told the Fader while premiering the track. "Colonization attempted to, and continues to, destroy our cultures, languages, land, and everything that makes us indigenous ... This song is for all the young indigenous people who are hurt, hopeful and pissed off. We survived genocide. It's time to start talking about it."

The song discusses the silence that's long kept indigenous issues out of the public discourse. "My fam suffers," he raps on the track. "The land suffers/ I hate the silence." After building his voice to a scream over the verse's driving beat, he breaks that silence on the hook: "This is the sound of a nation rising/ A generation with a vision/ We're tired of our people dying/ Seventh generation, we have risen."

The song also comes paired with a video. It features imagery of a march demanding indigenous justice and highlights the introductory poem by Tanaya Winder that sets the stage for Waln's call to action.

It's currently unclear whether this song is a one-off single, or is destined for a spot on Waln's forthcoming debut studio LP. Judging by what Waln told Mic of the album in June 2015, it'll fit right in:

It's gonna be my story of coming to terms with being a Lakota person, born on a reservation in South Dakota. Born with all this historical trauma and baggage, unfortunately descending from ancestors who survived genocide, and our whole history of colonization. That's still happening ... Hopefully, people who are going through something similar can use it as a framework for those who are living similar circumstances.

If any of the other ongoing social movements are any indication, there are plenty of people still fighting to end the lingering abuses of white supremacy.