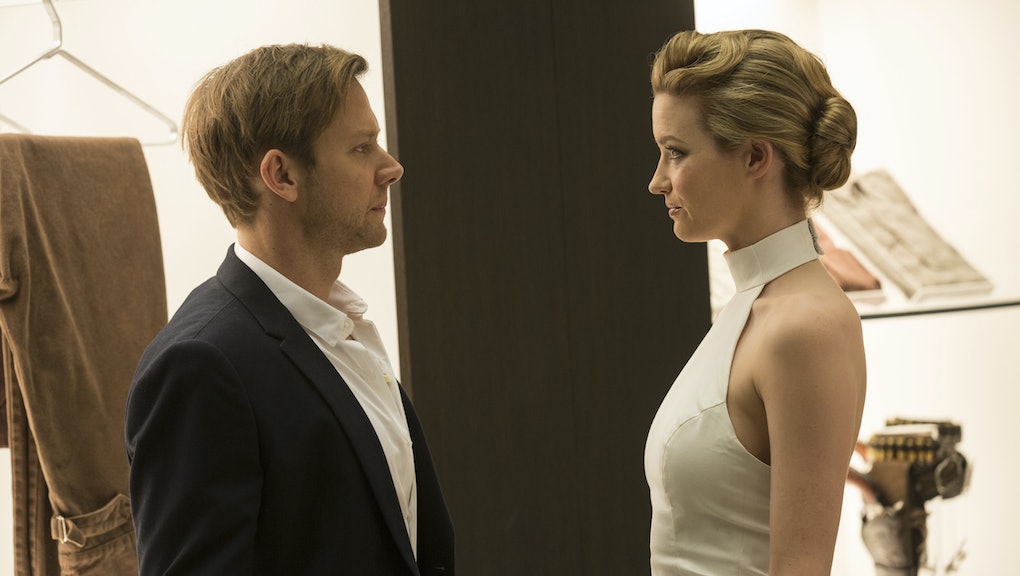 'Westworld' review: Episode 2 offers more questions about the world itself, and who's real

If you felt déjà vu watching Westworld's second episode, it's because it was not unlike the monotonous routine of the titular park's Hosts. They wake up with a clean slate every single day, but then are subject to the disturbing whims of the park's well-paying guests.

Episode two offers the perspective of a new guest, William, entering the park for the first time, along with his lecherous co-worker, evidently a Westworld regular (the type of visitor who just wants to have sex with everything).

The premiere offered a similar premise in the guise of Teddy — who begins his journey on the futuristic train ride to the park. It's only later we discover that it's just part of his programming when he's murdered by the Man in Black. Teddy's a host, too.

William, however, is almost certainly a human guest, but that's the exciting part about the onset of Westworld: We can't definitively say who's real yet. In turn, Westworld continues to offer questions about the depths of the fictitious world, whether all the events are even taking place at the same time and what the true natures of its characters are.

What is Ford building at the far reaches of the park? The programmer whose narrative in the premiere was literally shot down by a trigger-happy guest was effectively burned by Westworld's creator, Ford, after he unveiled another new storyline for the park that caters to the guests' murderous vices. Ford, however, was having none of it.

To that end, we see that Ford's been hiding his own pet project, presumably in the far reaches of the park. It's hard to even tell what it is — there's a black church steeple in the middle of the desert, and he's talking to a child that's dressed like him and shares similar memories of his father. It's quite possible Ford created a Host that bears the likeness of himself as a child.

The real question is: why? If Ford can implant his memories and likeness onto a Host, it could mean that's the next level of Westworld's vision of utopia. It could also mean the Hosts are already designed in the form of real people — perhaps with similar memories.

Ultimately, it may eventually tie into the Man in Black's quest to find the game within the game.

Are we seeing the Man in Black's past as he continues his murderous quest? The mysterious Man in Black continues his video game-like quest to find the deeper meaning — a hidden puzzle — to Westworld by murdering and brutalizing even more Hosts. It's a trope that's already becoming tiresome, but there's still hope that this storyline has more depth than creative kills.

As Vulture explained, the series might be playing with the notion of separate timelines with William's trip to Westworld, because he could be the Man in Black from the past. There's not much concrete evidence to support this theory yet. But it does offer some logical conclusions to William's story.

The show goes out of its way to emphasize that William is a nice guy — he politely rejects sex from two Hosts, saying that he has a significant other back in the real world and generally treats the Hosts with respect. But as William's sex-crazed co-worker explains, visiting the park is all about finding the true nature in yourself, not unlike Ford's vision for the park. It's not exactly revelatory for William's discovery to be: Yes, he's actually a nice guy!

Westworld could hypothetically toy with the separate timelines, too, because the Hosts don't age. So when William is meeting the Hosts, we don't necessarily know when it's taking place. That Dolores is slowly unraveling as she learns about the nature of her reality — but when William talks to her she's going about her meandering routine unperturbed — invites discussion.

Moreover, the Man in Black, in his own twisted sense, has a fixation on Dolores. He tells her he's known her for the 30 years he's been visiting the park. She just can't remember any of it after her memory's erased. William, clearly, is awestruck when his eyes meet Dolores' after he picks up a can she dropped. The same sequence, mind you, happens in the premiere between the Man in Black and Dolores. At the very least, it's a tempting parallel.

OK, so is Bernard a Host too? While Dolores' frenetic behavior has seemingly gone unnoticed by Westworld's employees, we learn that Ford's right-hand man, Bernard, has been secretly questioning Dolores about how she's feeling. He knows something's up, and again, we have to wonder: What is his endgame if he's not reporting it?

There's some theorizing — from the likes of Vulture and the Verge — that Bernard isn't actually human; he's another Host. Perhaps he's even Ford's greatest creation, hiding in plain sight.

"Perhaps the games he's playing with Dolores are even part of that new narrative Ford references," Vulture's Brian Tallerico explains. "Ford even says to [Bernard], 'I know how your head works.' What if he means it literally?"

However, even if Bernard isn't a Host, it's quite likely that at least one character in the series won't appear as they seem. (Can you imagine the mind-blowing reaction if Ford was revealed as a Host? He created the damn world!) But Westworld doesn't have to rush to these conclusions — we're here for the trippy, paranoia-inducing long haul.