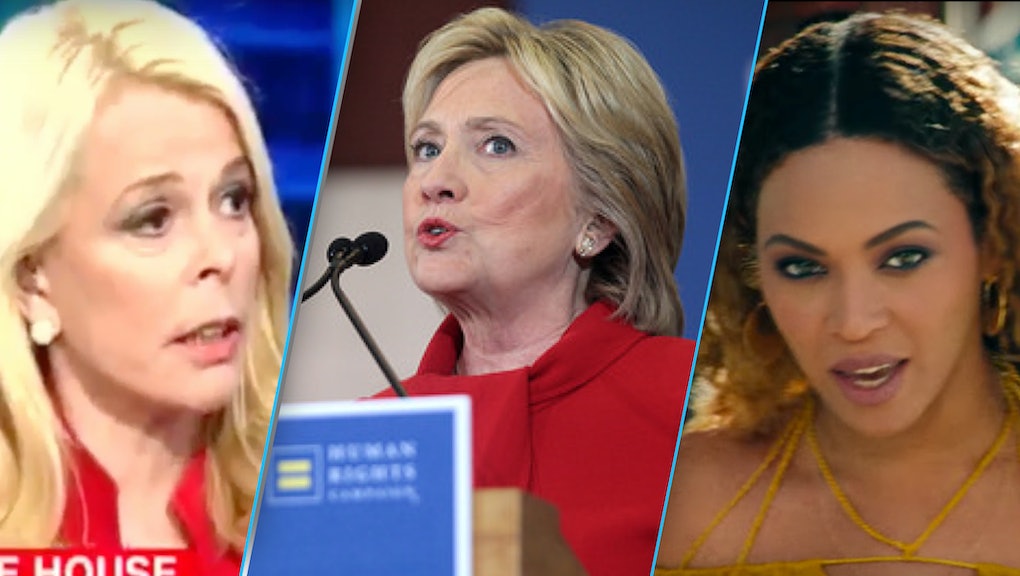 Somebody alert the Beyhive.

"I abhor lewd and bawdy language. I don't listen to rap music. I don't like that kind of thing." McCaughey said. She then went on to recite Beyonce's lyrics to "Formation," which, to be clear, is not a rap song.

"Hillary Clinton expresses that she finds the language on that bus horrific, but in fact she likes language like this," McCaughey says. "Quote: 'I came to slay, bitch,' 'When he F me good I take his ass to Red Lobster.'"

Why is she dragging Beyoncé into the fracas?

"That happens to be a line from Beyoncé, her favorite performer whom she says she idolizes and would like to imitate," McCaughey says. "So you know what I'm saying to you? There's a lot of hypocrisy in Hillary Clinton expressing such horror at the language on the bus."

One part of McCaughey's argument does hold up: At a rally in Iowa City, Iowa, in December 2015, Clinton did say that she wants to be "as good a president as Beyoncé is a performer."

But McCaughey's argument, which drew laughter and snickers from the other panelists, loses any credibility past that.

What Donald Trump talks about on that tape is grabbing women and kissing women without their consent. What Beyoncé's song describes is a married couple enjoying consensual sex and then hopping over to a chain restaurant to enjoy some Cheddar Bay biscuits. McCaughey's comment conflates consensual sex between two married individuals with predatory, nonconsenual sexual contact.

She also tries to paint Beyoncé as rap music and then paint all rap music as full of curses and demeaning language. Similar to the Christian mother who freaked out over her kids hearing Vince Staples' "Norf Norf" in a video that went viral last week, McCaughey is making blanket statements about a music genre that reflects the lived, if disturbing, reality of many people of color in the United States.

McCaughey may not like hearing language that is "lewd" and "bawdy," but I'm sure more than a few people don't like hearing words that are tinged with racism and promote rape culture. Especially not out of the mouth of someone who could potentially become leader of the free world.