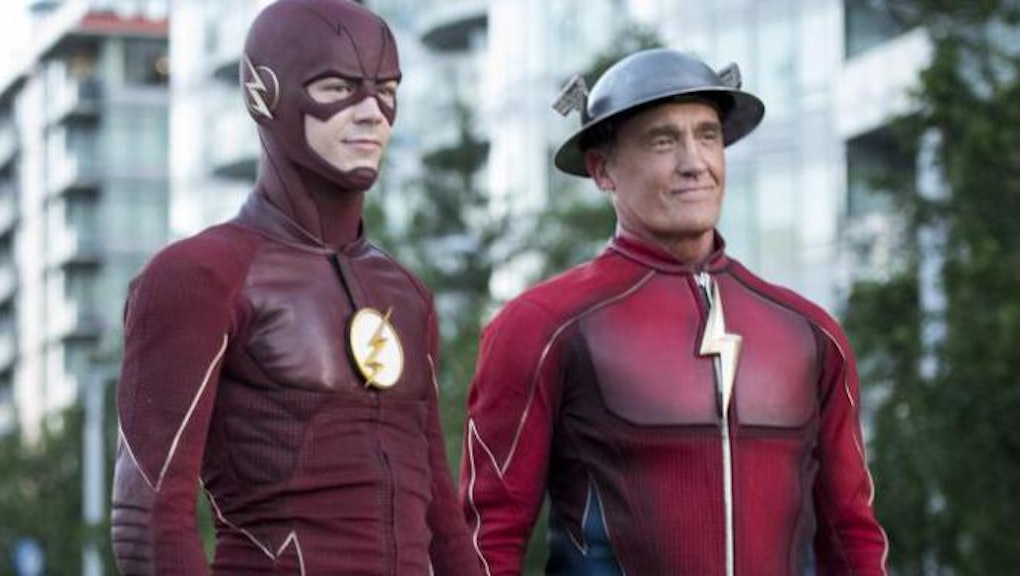 "We're not gods, we're men." That's the advice the Flash from Earth 2 gives Barry Allen in the middle of Tuesday's new episode, "Paradox." He's trying to convince Barry not to go back in time to try and fix things again. But he's also describing just one of the many paradoxes presented in the episode. With the ability to time travel and change lives, speedsters are, in fact, gods — but as Barry realizes, they must keep their humanity too.

If last week's episode, "Flashpoint," was a prologue, "Paradox" is chapter one for season three of The Flash. The episode had two primary objectives: set up the big bad, and resolve some of the mess Barry created by resetting the timeline. Mission accomplished on both fronts, with a healthy dash of Draco Malfoy thrown in.

If you went digging through your comic books or the internet after last week's episode to find out what "Alchemy" meant, you probably came upon Dr. Alchemy. Indeed, the show has teed up this comic book villain to be our big bad for the season.

In Tuesday's episode, we saw this masked, supernaturally gifted "monk" call once again to Edward Clariss, lure him to some creepy warehouse and then turn him back into the Rival. This means that Dr. Alchemy can telepathically speak to people and give people abilities. We also see at the end of the episode that Alchemy has a metal arm and hand.

Dr. Alchemy tells Barry that he's "preparing this world." Barry and Team Flash extrapolate based on that and the "husks" they've been finding around town, that he's going to give citizens of Central City their abilities from the Flashpoint timeline. Making them paradoxes! On a structural level, this works, as it will allow the show to do monster-of-the-week stories again.

Considering he's not a speedster, Alchemy is a welcome and different type of big bad for Barry Allen. Right now, much of the character is still a mystery, which makes him all the more menacing. Perhaps later on we'll see that he's not that much of a challenge for Barry, but for now Alchemy passes the scary test.

Continually rebooting the timeline while maintaining consistent character development has been a tricky line to toe for The Flash writers. "Paradox" went a long way in putting things back to normal but keeping some of the conflicts up in the air.

Almost all of the episode revolves around what is now different in Barry's life. As alluded to last week, Iris and Joe aren't speaking. It turns out that's because Joe didn't tell her about her mom being alive. Cisco lost his brother Dante in a drunk driving accident, and now he's pissed at Barry for not going back in time to save him. Caitlyn has ice powers, though she's keeping that a secret for now. And Malfoy himself, actor Tom Felton, is working alongside Barry as a forensics agent specializing in meta humans.

Felton plays Julian, an entirely new character, and he and Barry do not get along. Felton is playing Julian as a disheveled, British curmudgeon, but the way he antagonizes Allen feels very Draco vs. Harry.

Julian claims to see through Barry's "good guy" act and says he doesn't trust him. Felton's great at playing the angry skeptic though and it will likely come in handy if and when he becomes a villain later in the season.

Barry tries a bunch of things to fix this slightly broken world he returned to. First, he Parent-Traps Iris and Joe into have a big group dinner. Cisco's anger singlehandedly brings the whole thing crashing down. He then decides he'll try rebooting the timeline again at which point Earth 2 Flash pulls him out and reveals to him that what he did was like breaking a coffee mug — you can put the pieces back but it'll never be exactly like it was.

This leads Barry to accept his mistake and tell the gang the truth. He reveals the entire story of Flashpoint and let's them decide if they want to know what their original timeline lives were like. It's a powerful scene that resolves everyone's problems pretty quickly. Iris and Joe are all of a sudden all good. Cisco hasn't fully forgiven Barry but he comes to help him fight the Rival as Vibe. And Barry and Iris share a kiss. For all these cracks in the coffee mug Barry created, some of them seemed to seal right up within the 45-minute running time.

"Paradox" has set the stage for a new but familiar season, and that's entirely appropriate. Meta humans are coming. but not the ones we're used to. Barry is back in his "home" timeline, but it's foreign to him. Tom Felton is Julian but also maybe Draco Malfoy? Only time will tell.