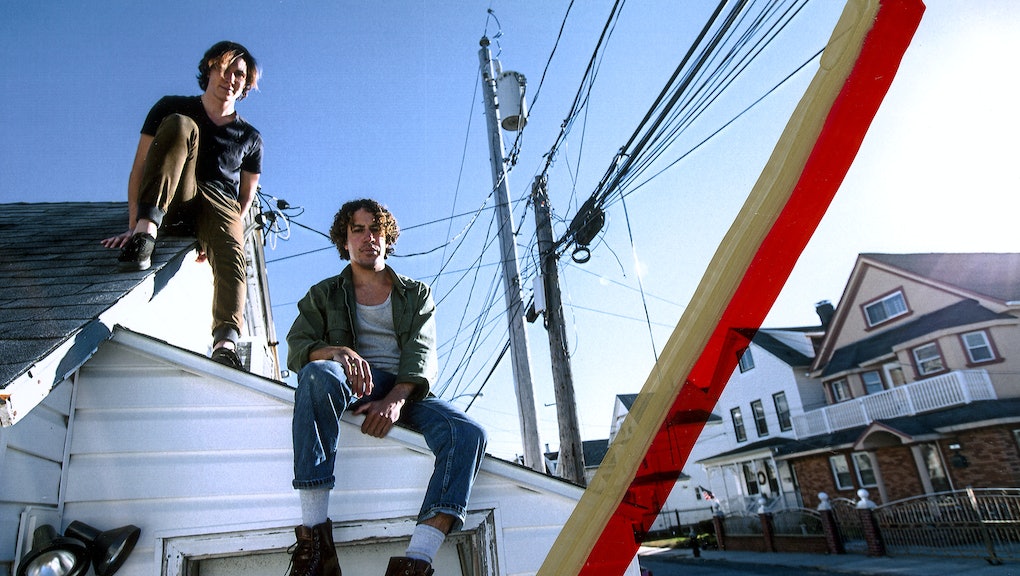 Ever since Lewis Del Mar debuted back in late 2015, critics of the world wide web have been having a field day describing the band's music. "A clattering, profane, mixed-media anthem" described the New York Times of their breakout track "Loud(y)."

It all feels right, but to date, no one has put the band's sound into more beautiful words than the artists themselves.

"We always say Lewis Del Mar should be like Jack Johnson on his sixteenth album after he's taken a bunch of LSD," the band told Billboard. "Like if Jack Johnson called up Kanye and asked him to produce his next album. They go off to Hawaii and trip on mushrooms and come back with this crazy record."

The strength of tracks like these offered the band — a duo of drummer Max Harwood and vocalist Danny Miller — an explosive entrance into the industry. When "Loud(y)" hit the net, it launched to no. 1 on the blog aggregator Hype Machine earned a spin on Beats 1 radio and led to their very first show at New York City's Mercury Lounge selling out. The duo signed to Columbia's Startime International imprint, which has put out its EP in January and self-titled LP Friday, both filled with the band's chimeric folk with a hip-hop swagger.

When first meeting the band two weeks ago after their set at New York's Meadows festival, they chuckled at hearing some of the descriptions that drew me to their music in the first place.

"You learn that these random quotes you give, people will digging into for years," Danny Miller said, before offering a more subdued and likely more informative description of the music for anyone looking to for something new: "Urban, electro, Latin folk — those are the slices of the pie. Very call and response-y, very James Brown-influenced in that way."

Maybe, if James Brown was down to lean into his samba rhythms, and intersperse his funk with dissonant field-recorded samples.

Much of the music on the new LP was informed by a recent trip Miller took to his ancestral Nicaraguan town where his parents first met. We spoke about how that trip changed his music and what it's like releasing music that's meaningful and preachy, but not political in this fraught election cycle.

Mic: It's interesting you highlight the "Latin" as being an integral part. I know the song you released Friday [Sept. 30, "Puerto Cabezas, NI"] was a narrative of you going back to the place where your parents grew. How did that trip inform where this record was going?

Danny Miller: It sort of made me understand my idiosyncrasies in a new light. I grew up in a multicultural household, so it got as simple as that fact. Going to the root of it, where it came from really made me understand why I trend towards certain actions or ways of thinking about the world. It made me want to be more honest about everything we were doing and everything we were doing. It just sort of broadened my view of what we were doing. It's a little bit difficult. It made everything I'm doing seem more sincere. It made me lean into certain parts of the project that I could name as my own.

I think some of the rhythms — Maxwell embellished the rhythms that I laid down in a demo sort of way.

"The stereotype of what becomes 'American' has to be white American apple pie. It's so frustrating to me. The reality is that the United States is a fucking hybrid, it was before anything else."

Max Harwood: What's interesting about being the partner in this, not actually experiencing it myself, I kind of saw it being the missing link and the thread that ended up tying together a lot of the concepts and ideas we had. It's only one element of the sound but it's very much a thread that connects it all.

Tell me a bit about the themes and topics the album will deal with.

DM: There's a song on the album called "Islands," and it's in many ways lyrically the thesis statement. It's this idea that when you're 25, 24, you have this turning point when you feel very connected to parts your past self and very disconnected from others. It's like learning to reconcile that and balance it and move forward. It's speaks to this idea from a macro level to the day to day of feeling like you're two separate people sometimes and what to do with that information.

MH: On so many levels, there was this reconciling of two different sides. One, me and Danny, two different people trying to come together as one, which is part of the reason we chose the singular name "Lewis Del Mar." And it's reconciling the Nicaraguan identity and the American identity. And then being 25 — you're young but you're not young anymore.

DM: You've had the first moments when you go to do things you used to do and you say, "That seems dangerous." And then sonically, it's like this reconciling the industrial and natural soundscape. It's this hybrid of two ideas.

MH: Oh man, that's deep. I feel like we just had a fucking moment.

Mulling over commentary that keeps coming out of the debates, I feel like so much of this election has come down to identity: What is America? Who is gets to call themselves American? We're in a New York bubble in many ways, but you guys seem to be getting a bit more perspective.

DM: I'm delicate about political questions — not because we don't have strong opinions about them, but because it's always a very difficult thing to paint broad strokes about a country that's as diverse and as multilayered as the United States. But I will say that in my experience, I've sort of found two things: The first is here is this man that's benefitted from everything America calls its own — whether its reality TV, consumerism, capitalism — and it's just like [Donald] Trump is as American as the rest of us. Whether he's a racist and bigot and a white supremacist. It takes nothing away from the fact he's a product of America.

The man is in many ways a robotic response to the venom that exists in our country.

MH: I'm gonna say this quick — it's hard to do quickly. We lived and studied in Chile for a while, and they have this traditional dance called the cueca. And I remember people in our study group being like "Oh this is so cool. Why doesn't the United States have a traditional dance and music?" We do. It's jazz and the blues, but nobody acknowledges that. The stereotype of what becomes "American" has to be white American apple pie. It's so frustrating to me. The reality is that the United States is a fucking hybrid, it was before anything else.

It seems like your music acknowledges this political climate, but it has this sense of urgency.

DM: It has an element that feels a little preachy. I use that word reluctantly. You look at someone like Erykah Badu, [or] Lauryn Hill, and it's music with a message. When I first heard that at 12 years old, it had the same thing that made me fall in love with Rage Against the Machine. I don't want to make stuff that's so overtly political, because I'm still forming so many of my views on these things. But yes, we try to make music with a message and an undercurrent of meaning that we feel like is often lacking in modern music.

So it comes off as feeling a bit empowered. It's not necessarily totally a good thing. It'll drive some people away, but it's hard for me to do anything other than that.