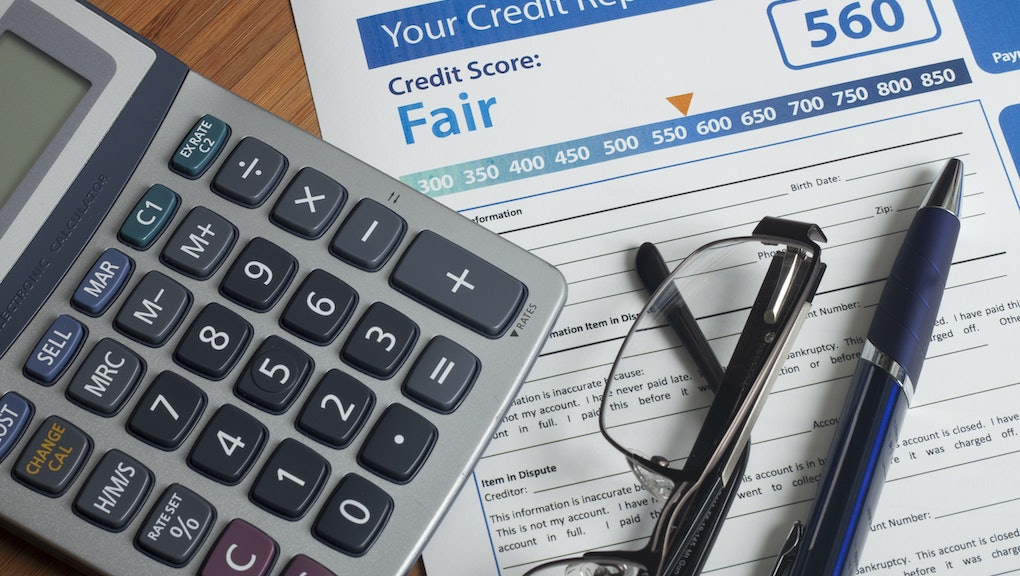 The worse your credit, the more you will spend on credit cards, car payments, and student loans. Conversely, improving your score can save you literal tens of thousands of dollars.

While there is much you can do to improve your credit (more on that below), remember you also have another tool at your disposal to protect your rights as a borrower: Your vote in this presidential election.

Republican nominee Donald Trump has proposed scrapping the Consumer Financial Protection Bureau, one of the regulatory agencies tasked with — among other responsibilities — regulating debt collection agencies and credit card companies.

Meanwhile, Democratic presidential nominee Hillary Clinton has expressed support for the CFPB. And while she has been vague on details about how she would protect borrowers, Clinton has said she wants to improve the accuracy of credit reports and — for those with bad credit — "make sure you get a second chance" and aren't denied jobs because of accumulated student loans or credit card debt.

The outcome of the election could also influence interest rates — specifically whether and how soon the Federal Reserve raises them. To protect against economic uncertainty, Citigroup chief economist Willem Buiter told CNBC, the Fed would likely cut rates if Trump were elected and hike them if Clinton were.

So, given that Clinton is projected to win, there's a decent chance you'll want to steel yourself for higher interest rates on credit cards and loans next year.

Of course, if you're concerned about your credit, you certainly shouldn't wait until after the election to begin improving your score and history.

Here are five ways to fix your credit — no matter who wins the election — and save money.

Check your credit report for common errors — like unrecorded payments.

The Federal Trade Commission has determined one in five, or about 40 million consumers, have had an error on one of their credit reports — and if you dig into the numbers, nearly half of consumers with an error saw a correction of 20 points or more.

True, 20 points isn't going to bump your score from "poor" to "excellent."

But for some, 5.2% of people in the study to be exact, the resulting increase was large enough to bump them into a new credit tier and lower the interest rate they could be offered for a loan: aka cash money savings.

How do these mistakes happen?

Financial institutions are expected to update the credit reporting agencies when there is a change in status in your account. But this doesn't always happen.

Sometimes the discrepancy comes up because you've used a different name or version of your name for different accounts or loans. It could also be a clerical error, or a delay in updating the information.

What you're looking for are real problem-causing discrepancies: You addressed a collection a year ago, but it is still on your report; a card that has been closed for a long time remains on your report; or there is an account on your record that you did not actually open.

If you find problems, the FTC offers some helpful suggestions of how to make changes to your report, like this handy form letter where you can insert the details about which charges you are disputing.

In addition, FICO offers links to the disputes department for each credit reporting agency, since you'll have to deal with them directly.

Pay down your debts — at least some of them.

"The simplest and quickest credit booster is paying down your credit card balances," millennial financial expert Stefanie O'Connell, author of The Broke and Beautiful Life, wrote in an email to Mic.

But that's easier said than done if you're working on a razor-thin margin to stay ahead of rent and utilities, in addition to student or car loan payments. It can feel like you're never going to get ahead.

One way to make a first dent in the debt is to think of small things that — while enjoyable — are not necessary. You might, for example, cut back on coffee and cabs to free up cash to squash one of your smaller credit card balances.

Indeed, a popular method to get debt under control — the "snowball" —  is to focus on paying off smaller balances first; while it's not going to save you as much in the long run as the "avalanche," where you first tackle high-interest debt, it can be more helpful psychologically. That's because the feeling of reward after paying off one balance can motivate you to pay off the rest.

Additionally, studies have shown that automating your savings accounts or even simply going all-cash for discretionary costs like clothes or dinners out can help improve your saving-to-spending ratio.

That said, it's a mistake to stop using credit cards altogether, given that responsible use helps build credit history — you should just be paying them off on time.

Amounts used relative to your credit limit, also known as your credit utilization ratio, comprises nearly a third of your credit score. So know that it is best practice to use no more than 30% of your limit.

Don't close unused credit cards as a short-term strategy to boost your credit.

Here's a riddle: You have two credit cards carrying balances. You pay off one and do a victory dance. You close that account and destroy that credit card in a ritualistic shredding of debt.

How is it then that your credit score doesn't improve? And might it even get worse?

Possibly — if now your credit utilization has gone up. Owing the same amount but having fewer open accounts may actually lower your credit score for that reason.

You also might try to negotiate an increase in your credit limit.

As long as you don't then increase your spending, your utilization ratio should go down.

Prioritize older cards, since they are weighted more.

Credit, if it is managed well, gets better as it ages.

Older Americans tend to have the better — higher — credit scores because FICO takes into account how long your accounts have been open and how well you've paid them over their lifespan. That makes up 15% of your score.

So if you're going to shut down a card, try to avoid killing off the oldest one: The history and track record is important and valuable.

Pay for your overdue library books and other "stupid" fees.

You may think it's no big deal if you get your library books back a little late, but just wait until you get your collection notice.

That's right, even a $0.25 library fine can turn into a big financial headache if left unattended long enough for the library to report it to a collections agency. Any debt that enters collections — even if it's small — can ding your score.

Some other easily overlooked fines include parking tickets, school fees and utility bills.

Now, a common misconception is that your rent and utility payments are always factored into your credit score. This is not the case — although some credit agencies are offering to include your rental payments as a way to build credit.

Finally, remember that none of the above steps will be a silver bullet. After all, a single late payment will stay on your credit report for seven years.

But these tips do represent an excellent starting point to begin raising your credit score, which will lead to lower interest payments and make it easier to get out of debt.

In the meantime, let's just hope questions about credit — and how to create better policies to protect borrowers going forward — are posed to candidates Clinton and Trump before the presidential election ends.