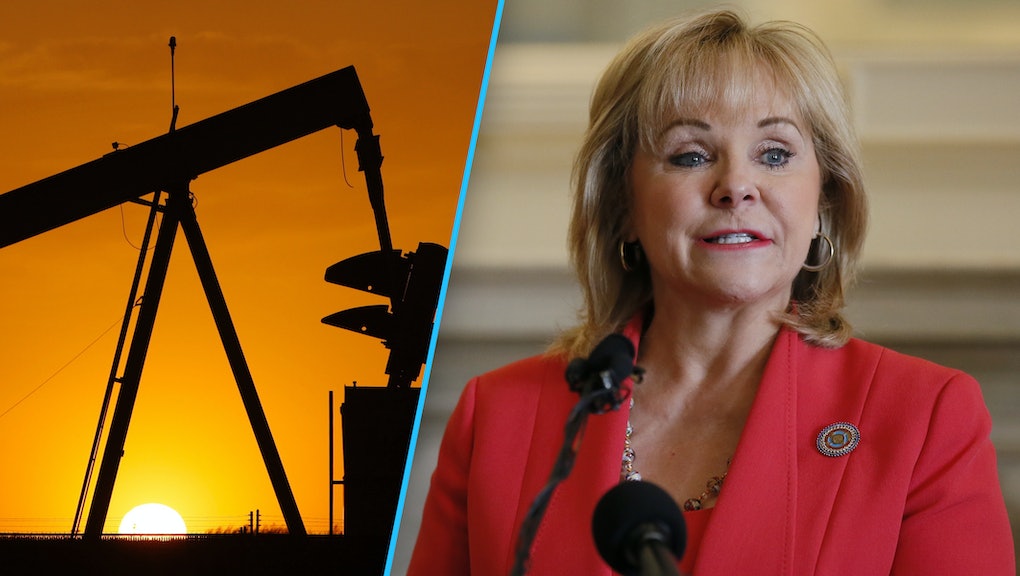 People in Oklahoma are praying for the oil fields today

The religious right has a lot to pray about these days: the overdue rapture; babies they'll never get to know; the rise and impending fall of documented coveter of other peoples' wives, Donald Trump.

But right now, they're praying for the oil fields, which are in such an imperiled state that Oklahoma Gov. Mary Fallin — an avid Trump supporter — named Thursday Oilfield Prayer Day, inviting her constituents to appeal the Lord to show mercy on its oil and gas industry.

When Oilfield Prayer Day was initially reported in October, it applied only to Christians, but on Monday, Fallin widened her call to prayer to include members of all faiths, the Associated Press reported.

This because Oklahoma's oil industry is flagging. Slumping oil prices have hit Oklahoma particularly hard. But according to Reuters, during the boom, cash wasn't flowing into the state's reserves so much as into the pockets of a few. Now that the boom is over, oil barons still enjoy enormous tax breaks — to the tune of $470 million in 2015. Government services instead took the hit, with some public schools now operating only four days a week, so low is their funding.

"There are many people suffering right now who have lost their jobs in the energy sector ... there are a lot of families who have been hurt, and I think prayer is always a good thing, for anyone," Fallin said, according to the Associated Press. So, rather than praying for those families — or reconsidering those low, low oil tax rates — Fallin is rallying good Christian folks to pray for the oil fields themselves.

"We have a saying: The oil field trickles down to everyone," Oilfield Christian Fellowship member, Jeff Hubbard, told the Washington Post.

But, as Reuters' report indicates, that's not really true in Oklahoma. Despite his industry's nose dive, oil tycoon Harold Hamm remains the richest person in Oklahoma with a net worth of $15 billion, according to Forbes.

In any case, people are tweeting their unfiltered thoughts and prayers in honor of Oilfield Prayer Day.