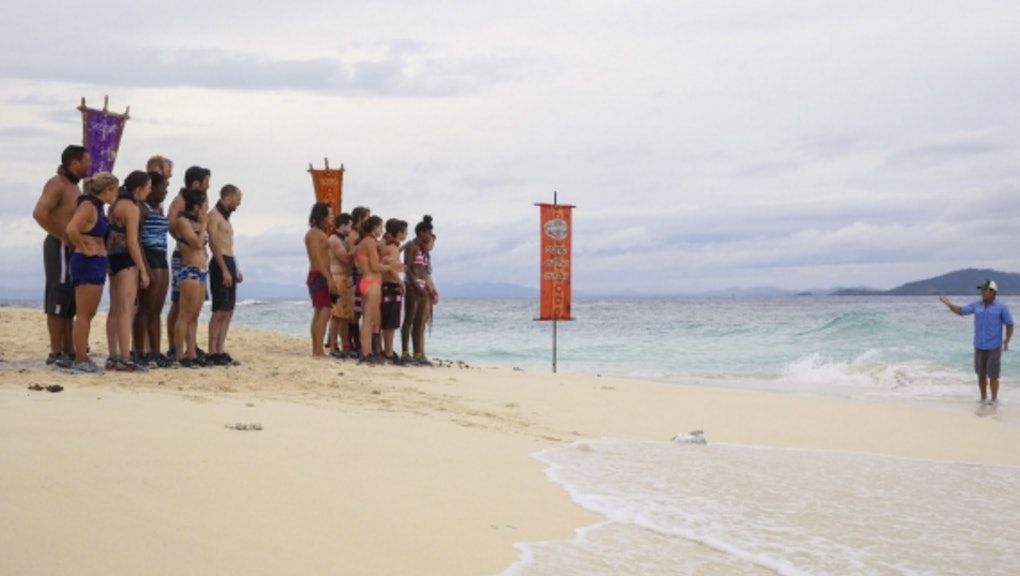 Howdy, Survivor fans! Welcome back to the beaches of Fiji, where 17 remaining castaways — some who use "you" in text messages and others who use "u" — are still valiantly fighting to outplay, outwit and outlast one another.

Episode four is all about the Immunity Idols: A Millennial finds one hidden in the sand, and a Gen Xer plays one at Tribal Council. Ultimately, all the idols in the world can't help Gen Xer Lucy Huang, who becomes the fourth person eliminated from the competition.

Back at camp Gen X, Chris Hammons and Bret LaBelle are pissed that former allies Jessica Lewis, Sunday Burquest and Lucy staged a feminist revolution, conspiring to vote out Paul Wachter. The women try to defend themselves — but the next morning, they question whether they made the right move.

But there's dissent among the lady ranks. Lucy wonders if she can really trust Jessica, ringleader of last week's blindside — so she, Chris and Bret team up to take Jessica out. They all agree she's manipulative and dangerous.

"You've now shown your cards," Bret says of Jessica. His Boston accent is very fun. Chris, who is a lot less fun than Bret's accent, declares they should "zap her ass" at the next Tribal Council.

Over at the Millennials' camp, the kiddos are hungry. Their plan is to go out and hunt a pig, Survivor: Australian Outback-style. They don't end up finding a pig, but Adam Klein finds something better, albeit less filling: a clue to a hidden Immunity Idol.

It's time for the Reward Challenge: an exhausting-looking two-on-two competition to wrestle a hoop through the ocean waves to a pole planted in the water. The prize is a meat-filled feast of steak and sausages — sure to go down easy after days of eating nothing but rice. After a series of grueling matchups, Gen X wins the one-way ticket to gastrointestinal distress.

Back at camp, Adam wants to find that hidden Immunity Idol. Despite some tricky clues, he finally finds it hidden inside a shell on the beach. Success!

Adam hasn't had a ton of screen time this season, but here's why he should be your new fave contestant. Through tears, Adam explains that his mom — a Survivor superfan, just like him — was diagnosed seven months ago with stage 4 lung cancer.

"It's been the worst thing you can possibly imagine," Adam says. "So to have my biggest dreams coming true at the same time my worst nightmare is happening ... it doesn't feel real."

"She's the ultimate reason for being here," he adds. If anyone tries to vote off Adam, I will personally mix sand into their one sad meal of the day.

Over at camp Gen X, Lucy asks Ken McNickle and David Wright to join her crusade against Jessica. But her authoritative delivery rubs Ken — forever insecure he isn't manly enough — the wrong way. After all, a woman should always comport herself like a proper lady, e'en when competing on Survivor!

Next up is the Immunity Challenge. It's a cool one! With the help of a pulley system, the tribe members lift each other upward on a chair to snag a series of numbered squares. The squares are sacks containing letters, which the tribes then have to arrange into a secret message. The Millennials, who are good at puzzles, take home Immunity.

Once again, Gen X is headed to Tribal Council. Ken, his ego bruised for no good reason, wants David, Sunday, Ciandre "CeCe" Taylor and Jessica to vote out Lucy, instead. Ken relays his new plan to Jessica — who promptly goes and relays it to Lucy. Uh oh!

Ken is even madder than he was before. Why does no one respect his authority around here? The man can catch an octopus with rudimentary fishing gear, dammit! He's lived off the grid! For fun! He's strong and tough — and by golly, no bossy girl is going to tell him what to do!

Ken confronts Lucy about the way she spoke to him — and it doesn't go well. Nothing is resolved. Between Lucy and Jessica, it's unclear who's going home. To throw things even further into disarray, David confides to the camera that he's bringing along his hidden Immunity Idol. He may use it, a mere four weeks into the season, to save Jessica. This is a disaster.

Speaking of disasters, the patriarchy is hard at work during the tribe's chat with Jeff Probst at Tribal Council. Ken complains to Jeff about Lucy's authoritative manner of speaking. When Lucy rightfully stands up for herself, Jeff points out that she's doing it now — you know, talking like a confident person.

And now for a perplexing, ridiculous, oh-my-god-why-are-you-doing-this move: When it's finally time to vote, David stands up and plays his Immunity Idol on Jessica's behalf. That's an Immunity Idol he could have saved for himself later in the game — used on a person with whom he has no alliance.

Well, it works out nicely for Jessica; the five votes cast against her don't count. They're followed by a vote for CeCe, then two votes for Lucy. All thanks to David's bizarre decision, Jessica is saved — and Lucy becomes the fourth person voted out.