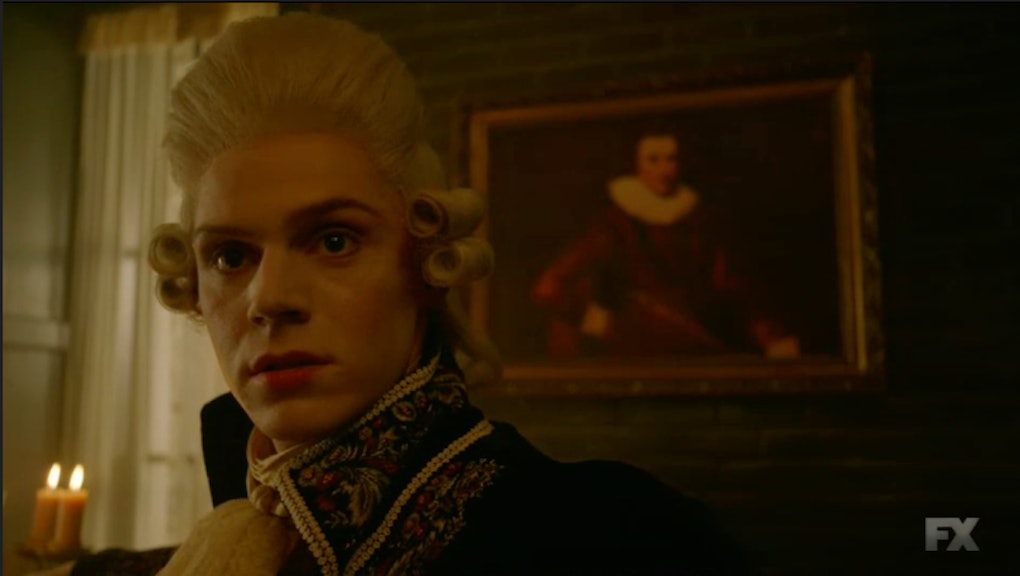 So Evan Peters finally decided to show up on American Horror Story: Roanoke's fifth episode — and let's just say that it was definitely worth the wait.

The episode begins with historian Doris Kearns Goodwin taking us back in time to explore the history of the Mott family. For fans who have been keeping up with American Horror Story each season, you may remember that Dandy Mott was the psychopathic heartthrob from Freak Show who stole the show. During Wednesday's episode, we get to see one of Dandy's ancestors, Edward Philippe Mott (played by Evan Peters donning a fabulous wig).

Mott is the Roanoke house's original owner. He left his wife and children to move in with his boyfriend, Guinness. Mott decided that he would escape the city and build a mansion on his own plot of land, due to his fear of being persecuted for being in a gay, interracial relationship in the 1700s. Mott, who is also a painter and art enthusiast, adorns the walls with his own creations. But one night, he wakes up to find that his paintings have been desecrated.

Mott automatically assumes it was one of his servants, so he rounds them all up to find out answers. When he's unable to find out what happened, he locks them away underground. It turns out Mott's assumption about his servants was very wrong. The Roanoke colony finds him, captures him, brutally stabs him and burns him alive. Let's just say that some fans were surprised to see Peters die only 15 minutes after making his debut appearance this season.

In an even more tragic turn of events, Guinness, who somehow managed to escape, is accused of Mott's murder. We flash-forward to the historian being interviewed for the show, saying that the property continued to be held by the Mott family, once again alluding to Dandy from Freak Show.

The episode returns to focusing on Shelby and Matt, who still have not escaped their Roanoke nightmare house for whatever reason. As they begin to plot an exit strategy, a ghost who resembles the creepy girl from The Grudge snatches Flora and begins to run away with her.

All of a sudden, all of the house's previous (now dead) inhabitants begin to show up. Shelby and Matt seem to be out of luck when, suddenly, the ghost of Mott shows up to save the day.

Mott helps the distressed couple navigate through the underground channels of the home so they can escape the ghoulish fiends who have shown up to kill them. But once Shelby, Matt and Flora are back in the woods, they are attacked by a familiar group of faces: the Polk family, a family of poor farmers who were outbid for the Roanoke manor.

Now, trapped at the house where they discovered the feral boys, the Polks reveal to Shelby and Matt that their family has a deal with the Butcher. If they bring her human sacrifices, she leaves them alone. This is where we meet "mama," played by the great Frances Conroy, who is a longtime AHS regular.

Matt and Shelby plead for the Polks to let them ago, but the family is still pretty upset about the two feral boys being taken away at their hands. They drive Matt, Shelby and Flora back to the house so the Butcher can have her way with them. This is where a series of not-so-smart decisions are made: Matt tries to grab the gun from one of the Polks, but ends up crashing the car in the middle of the woods. Mama, who is now severely pissed off that one of her boys has died in the accident, breaks Shelby's leg with a shovel.

Now, Shelby and Matt are trapped in the middle of a hellish bonfire where they are about to be sacrificed to the Butcher. She's about to give another speech when an unlikely hero turns up. Ambrose, the Butcher's son (played by Wes Bentley), decides that he is fed up with his mother's continuous taking of innocent lives.

Ambrose decides to save the couple by throwing his mom into the fire. All of a sudden, Mott shows up to cut Matt, Shelby and Flora loose. Then, the pig man decides to attack but Lee runs over him.

Now, the main characters have escaped to a motel and are awaiting a flight back to Los Angeles. It appears that their nightmare is over, but we still have a whole season ahead of us to prove them wrong. Ryan Murphy's promised shocking twist is coming next week on Wednesday at 10 p.m. Eastern on FX.