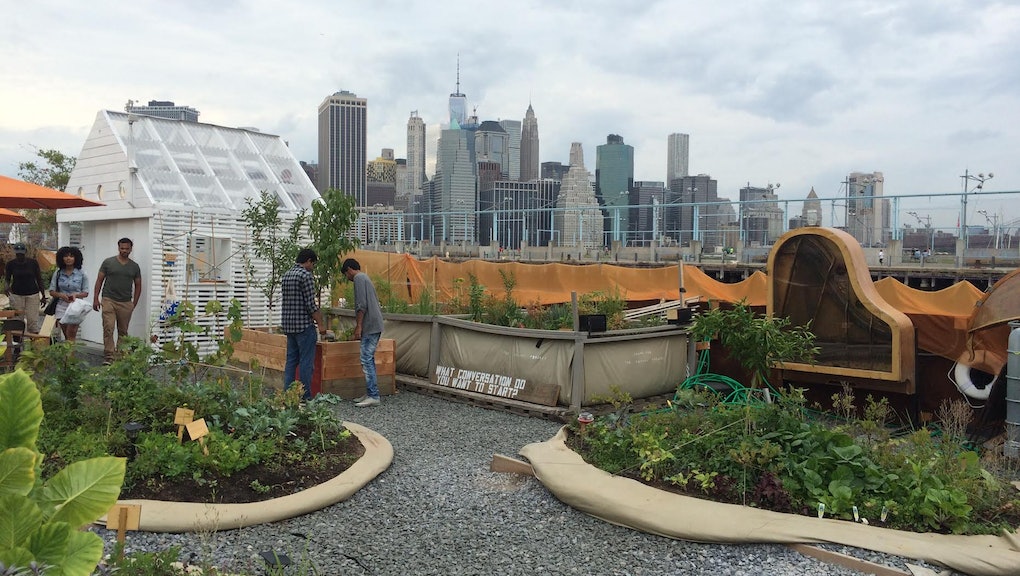 A look inside NYC’s floating food forest, where you can pick free kale, berries and more

New York City, that concrete jungle filled with hopes and dreams and millions of busy human beings, has 1,700 parks, playgrounds and recreational facilities, according to New York City's Parks Department.

But you can't swing by Central Park to pick up some salad greens for dinner — it's illegal to forage in public parks because the government views this as destruction of public property.

One artistic activist hopes to challenge the idea that public lands can't be used to provide people with fresh, healthy food. By building and maintaining a floating "edible food forest," Mary Mattingly, a 37-year-old artist, has created an alternative, edible reality that could serve as a model for the city's future.

So, what exactly is a "floating food forest"?

Imagine a lush, green island bobbing in the Hudson River. It's a giant 40-foot platform with trees, gardens, pebble walkways and a small white structure that provides much-needed shade on hot days. A food forest isn't a jazzed up synonym for a garden; it's a mini forest in an urban environment, attempting to replicate tree coverage, the balance of plant life and other characteristics of a forest's ecosystem.

This particular piece of art is supported by A Blade of Grass, an organization that supports socially conscious artists, but the masterpiece is a far cry from the protected, untouchable paintings hanging in the MoMA. Practically everything on the platform is edible, and Mattingly encourages visitors to taste and touch — it's experiential from the moment you set foot on the vessel.

Plant beds are recycled from water bladders (durable containers) used by the Army. Mattingly said 70% of the plants are edible, and the other stuff is for pollinators (like bees), or for keeping pests away.

"As a public food forest, Swale can only exist in New York because it is on the waterways" Mattingly said in an email. "The waterways are the closest space we have in New York to a true commons." Her vision: The experimental floating food forest will incite discussion on commodities, value and public commons.

This past summer, Swale docked in the Bronx and Governors Island. It's now off of Brooklyn Bridge Park — Mattingly hopes it can find a permanent place to dock near Concrete Plant Park in the Bronx. She's also working with the NYC Parks Department to formulate a long-term maintenance plan where edible plants are transplanted off of Swale and onto public lands.

"Many of the same plants humans enjoy play an integral role in balancing our fragile, natural, urban ecosystem, and removing them for human consumption would rob the other plants and animals of their benefits," Crystal Howard, media relations director for NYC Parks, said in an email, explaining that New York City would not be able to sustain large amounts of urban foraging.

But Mattingly noted that a little land goes a long way — if there were no footpaths on Swale and the entire vessel was a garden, it could produce 600 pounds of produce every six months, she said.

Food that travels many miles to reach our plates contributes to carbon emissions that fuel climate change, so having more urban agriculture or a culture of foraging could help New Yorkers decrease their carbon footprint. Plus, urban food forests can potentially improve food security and public health, Marla Emery, a research geographer for the USDA Forest Service, noted in a webinar.

The Parks Department encourages people to join a community garden if they're interested in growing or harvesting plants, Howard said, explaining there are over 550 gardens in New York City.

"People are more generous and care-giving than the city gives us credit for." —Mary Mattingly, activist

But public produce, as Mattingly conceives it, differs from community gardens that are established in abandoned or private spaces. Cities like Seattle, Washington; Des Moines, Iowa; and Madison, Wisconsin, host gardens on municipal land that are available to anyone, Grist reported.

And even in municipal gardens, there aren't significant reports of people taking advantage of the free bounty or over-foraging. The food forest on municipal land in Seattle has a consistent surplus three years after it was established, Grist noted in 2015.

On Swale, people didn't over-forage, Mattingly noted. There was an opposite effect: Visitors trimmed plants and brought plants and seeds to Swale.

"To me, it's proof of the obvious: People are more generous and care-giving than the city gives us credit for, and the more we are entrusted with care taking, the more we want to act accordingly," she said.