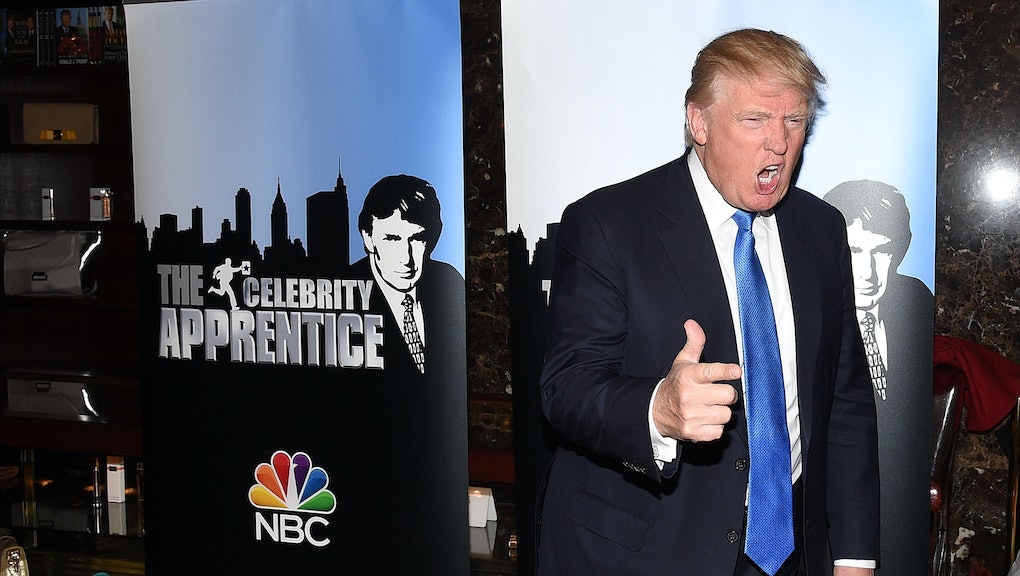 There are 7 winners of Celebrity Apprentice: Here’s what they say about Donald Trump

Whether he ends up in the Oval Office remains to be seen, but come Jan. 2, 2017, NBC will air a new season of Republican presidential nominee Donald Trump's hit reality show Celebrity Apprentice — this time with former California Gov. Arnold Schwarzenegger in charge in the boardroom.

Schwarzenegger announced that he will not be voting for Trump a day after a tape was released showing the candidate making predatory comments about women — which some say amounts to an admission of sexual assault — back in 2005.

The show will be rebranded as The New Celebrity Apprentice.

With Trump's famous "You're fired!" line, Celebrity Apprentice was a ratings bonanza during the seven seasons it aired on NBC, from 2008 to 2015.

Each season, one celebrity won a coveted prize of tens of thousands of dollars that would go toward charities of their choice.

Here's what the seven Celebrity Apprentice winners have to say about Donald Trump.

The day that Trump announced his candidacy for president, Morgan wrote a column for the Daily Mail warning American voters to watch out. While he says he doesn't agree with Trump on everything, he believes that he's a formidable candidate.

Morgan told Fox Business that Trump is the "most unpredictable, extraordinary, entertaining and massively popular candidate this country has ever seen."

"The very day he threw his hat in the ring last summer, I wrote a column saying, 'Do not underestimate Donald Trump.' I've known him for 10 years and he's a good friend of mine. He will not be in this to lose," he said. "If I'm Hillary Clinton, I'm worried right now. I'm seeing a train steaming my way, and I probably don't have any clear idea of how I'm going to avoid it."

Joan Rivers, the legendary comedienne, won the second season of Celebrity Apprentice. The brash New Yorker impressed the real estate tycoon with her business savvy. Sadly, she died in 2014 from complications during surgery.

Trump and Rivers had a decades-long relationship. He was a guest on her Emmy-winning, but short-lived daytime talk show, The Joan Rivers Show, which ran from 1989 to 1993. And Trump participated in Comedy Central's roast of the comedienne in 2009.

While we won't ever know who Rivers would have voted for in this historical election, her daughter Melissa said last summer that she does not support Trump for president.

"I know Donald on such a different level," she told the New York Post's Page Six. "Right now, I'm all about Hillary. And I don't think anybody could get me off that track."

Bret Michaels, the famous '80s hair band rocker, won the third season of Celebrity Apprentice. Known for his highly sexualized reality show Rock of Love, in which scantily clad women clamor for a relationship with him, Michaels impressed Trump with his business savvy.

In 2011, when Trump was eyeing a run for president in the 2012 election, Michaels punted when asked he would support a Trump administration.

"Donald Trump and his family have been wonderful to me and St. Jude's Children's Hospital is one of my favorite charities," he told Fox News. "Regardless of political views, the only thing that should matter is the lives of these children and their families."

John Rich was the first major country star to win Celebrity Apprentice. In 2011, he beat out actress Marlee Matlin — who was sexually harassed by Trump during filming, according to a different fellow contestant.

"He's the only guy who's gonna say it like he says it," he told Fox News. "At least you got a guy there who's not pulling any punches with you. He's going to tell you exactly what he thinks and exactly what he feels."

Arsenio Hall, the late-night talk show host famous for having Bill Clinton play the saxophone during the 1992 presidential campaign, won the fifth season of Celebrity Apprentice. He is also the first and only African-American winner of the show.

But he's no fan of Trump or Democratic presidential nominee Hillary Clinton — and is apparently "considering a write-in vote for Jesus" on Nov. 8., according to a recent tweet from his official Twitter account.

The tall, brooding country music star returned to the show and won the sixth season in 2013.

Last fall, Adkins told Taste of Country that he supported Trump's bid for the White House.

"I think we're in a very serious place in the history of this country and we need to take it pretty seriously, and I think he does," Adkins said. "But I don't think anybody else takes him seriously, so he's having to deal with that... I think we ought to try a businessman running the show for awhile. I mean, nothing else has worked."

She hasn't spoken out about the 2005 Access Hollywood tape showing Trump speaking in vulgar terms about fellow TV host Nancy O'Dell. But back in April, she said voters have a lot to learn from Trump.

Trump "was really able to cue up dramatic moments [on the show] because he sees them, he creates them," she said on Inside Edition. She also said that Trump treated her "very respectfully" during taping of the show.

Check out Entertainment Tonight for a look at what many other Celebrity Apprentice contestants have to say about Trump.