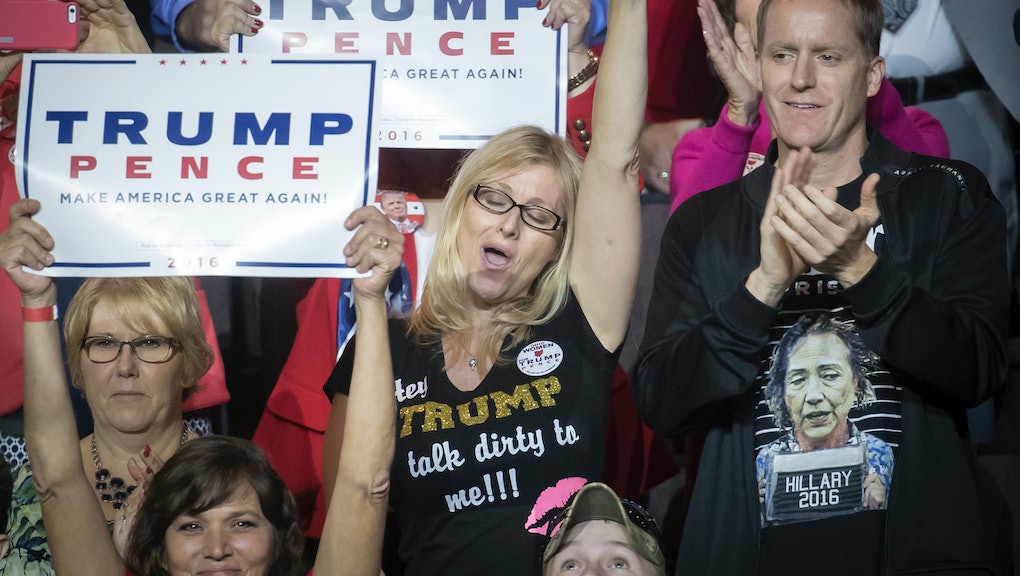 "I'm going to dismiss it": Why Donald Trump's women supporters are standing by their man

CINCINNATI — Jean Bange's feelings about Donald Trump are this simple: "I don't even want to live in a world where he's president."

Bange, watching over her granddaughter Friday at a get-out-the-vote rally headlined by former President Bill Clinton, shook her head.

"I don't understand it. I live in the city; on my street, there's Hillary signs in every yard. [Not] a single Trump sign," said Bange, an IT specialist who calls the Republican nominee "an awful person" and believes the spiraling reports of his alleged misconduct toward women.

"I absolutely don't see how women can tolerate it — but men shouldn't tolerate it either," she said as 16-month-old Iris jiggled along with the rally tunes.

"It really alarms me that the American electorate [is] willing to believe somebody like him," she said.

But they can, and they do — in decreasing numbers, it seems, but still enough to draw President Barack Obama, former President Clinton, and the candidates themselves to Ohio to do rhetorical battle.

On Thursday, Brandy Loop drove two hours from her home in Scioto County, Ohio, near the Ohio-Kentucky border, to join thousands of Trump fans at the U.S. Bank Arena in downtown Cincinnati.

The soft-spoken 34-year-old mom, a full-time caretaker for her father, insists Trump will secure the borders — while Democrat Hillary Clinton can't be trusted.

If the GOP nominee has made crass comments about women, that's not enough to cost him Loop's vote if it's effectively a binary choice between the two nominees in November.

"I just feel like it's stuff that he's said in the past," she said of Trump's track record on chasing women — or worse. "I don't think it's going to have any kind of effect on how he can operate the country and make America safe and great again."

The real priority: "The future for my daughter. She's 10," said Loop, who attended the rally with her 14-year-old niece — but didn't bring her own child along, she said, for fear of "rioting" in the city.

Loop, who decided to support Trump about six months ago, says when it comes to spiraling accusations that the Manhattan mogul physically assaulted women, "I don't believe that at all."

An NBC News/Wall Street Journal/Marist poll released Thursday showed Trump one percentage point ahead of Clinton among likely voters in the Buckeye State in a four-way race including Gary Johnson and Jill Stein. In a head-to-head contest, Trump and Clinton finished dead even at 45% each.

By Sunday, the RealClearPolitics average for the state had Clinton up by 1.6 percentage points.

As the race for president barrels to its conclusion, reports and allegations regarding Trump's behavior toward women — and girls, including some as young as Brenda Loop's daughter and niece — dominate the headlines.

The RealClearPolitics national polling average showed Clinton ahead by between five and six percentage points on Sunday. But Trump loves to say his supporters are the most loyal — and while some in his party have pulled back, some of that loyalty was in evidence in the ranks of women at his rally at the US Bank Arena.

Yes, there are #WomenWhoVoteTrump — and they're proud of it.

People like Denise O'Bryan, 59, and her daughter, Rachael, 27, won't condemn their candidate based on the words of his accusers.

"It's not okay what he said, but [I'm] kind of of the notion that actions speak louder than words. I still think Hillary's done so much worse than him — very much," the daughter said on her way out of the ear-splitting rally. "Doesn't excuse what he said — but I don't care what he says. I'll support him no matter what, because I think he means well [for] the country."

As to Trump's assertion that the assault allegations come thanks to a dastardly "media conspiracy" to destroy his chances at the presidency, "I don't doubt it," her mother added.

"Anytime someone gets in this position, girls start saying things. ... Unless they can prove it, then I'm going to dismiss it," O'Bryan said.

Trump had already delivered a sharp-elbowed speech in his own defense earlier Thursday, in Florida, before jetting to Ohio.

There in the Sunshine State, he railed against what he described as a coordinated effort of the "Clinton machine" and the "corporate media" to derail his campaign.

When Trump showed up in Cincinnati, where the Indian Hill neighborhood with the 45243 zip code has historically been a solid source of GOP donations, there was more than a whiff of anti-press sentiment in the arena — and definite defiance on display in the ranks of the faithful.

Rather than shudder at the nominee's reported remarks, some of the crowd seemed anxious to reclaim and reframe them. One woman standing behind the candidate during his address proudly sported a t-shirt that read, "Hey Trump, talk dirty to me!!!"

Supporters of the GOP nominee sported pink "Women for Trump" buttons and "Hillary for prison" gear.

One woman's more graphic sartorial statement — a riff on one of Trump's notorious hot-mic moments — made the rounds of the web in a flash.

Outside the arena, a female vendor and self-described Trump fan hawked "Make America great again" caps, a selection of "Blue lives matter" pins — and shirts lampooning Clinton as a "bitch."

Mexico-born fitness instructor Yanett Masterson came to the Cincinnati arena to support her candidate with a giant hand-lettered "Latino Women For Trump" sign in hand.

"I think it's not true. He's very professional. I don't believe all these bad things about him," she laughed when asked about the accusations against Trump.

"I'm Latino; I'm Mexican too," she said. "But I'm a USA citizen — and I pay my taxes. These [undocumented] people have more money than me because they are cheaters."

That's not to say all Trump supporters here are comfortable with the reports of Trump's interactions with women, proven or alleged.

Taxi driver Muhammad Aboud, 35, who came to the US from Somalia, said as a Muslim and a conservative Republican, he's fully in accord with Trump's vow to clamp down on the borders in the name of national security.

Still, "I was shocked when I [saw] all this woman stuff coming out," Aboud allowed. "[In] my country, we respect women. ... That's hard for me. But still, I am supporting [Trump]. Both of them [are] bad, but Hillary is much worse."

At Friday's Clinton get out the vote rally, at Cincinnati's Washington Park, the former president called Trump a dangerous choice for the White House.

Student Arika Browning, 17, attended the event with her mom. To her, Trump's reported behavior is "not okay. Not even close."

But Browning says she's no "Bernie or bust" type. She "can't fathom" how voters can tolerate the parade of testimonials about Trump's treatment of women.

Plus, to Browning, Clinton's run to become the first female president — particularly in a cycle where women, oddly enough thanks to a male candidate, have become an intense focal point of the discussion — is an inspiration.

"It serves as a symbol for other women that they can do it," she said.

Trump and Clinton face off in their third and final debate in Las Vegas on Wednesday.