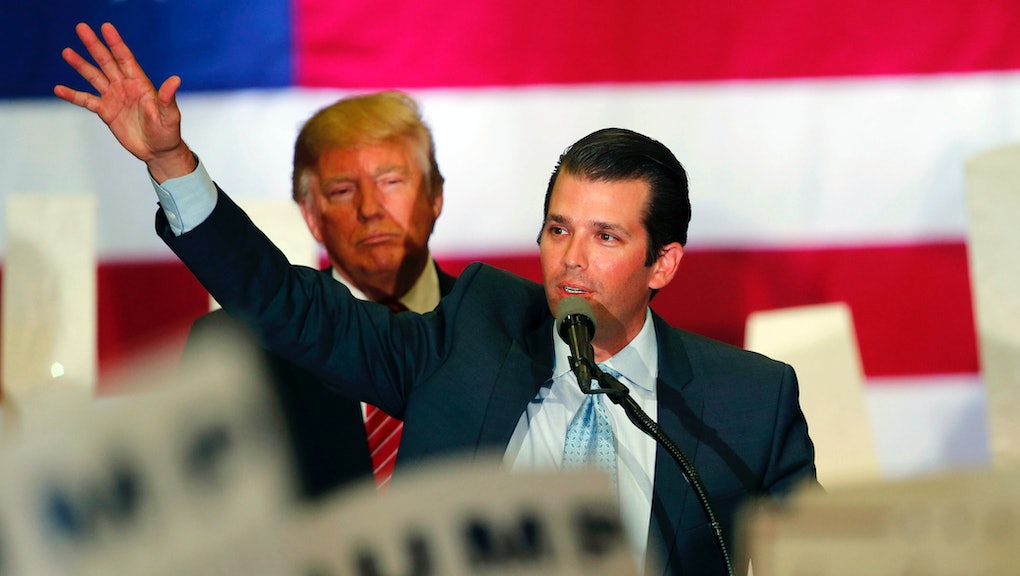 Listen, ladies: If you're not prepared to handle a little sexual harassment at work, you probably shouldn't be working at all. At least, that's the preposterous idea put forth by Donald Trump's oldest son, Donald Trump Jr., in a nauseating March 2013 radio interview unearthed by BuzzFeed News.

While a guest on the now-defunct Opie and Anthony Show, Trump Jr. was asked about all-male golf clubs, and whether women should be allowed membership.

One host suggests women "complain" and "fuck it up" by being present. "That's why we hate them around, because they fuck — they stop us from doing what we want to do, and they complain," he says. The hosts proceed to complain about how annoying it is when you want to tell a great joke, but have to hold back because women are around.

It only gets worse from there. "I'm sure I'll get myself in trouble one of these days," Trump Jr. says. "If you can't handle some of the basic stuff that's become a problem in the workforce, like, you don't belong in the workforce.

"Like, you should go maybe teach kindergarten," he says. "I think it's a respectable position. But like, you can't be negotiating billion-dollar deals if you can't handle like, you know — there's a place where you have to draw the line, but like today, there's stuff that you get in trouble for, it's like, I wouldn't even think about like..."

A host joked about what would happen if he pulled up a picture of a naked women on his computer.

"I feel harassed!" Trump Jr. mock-wailed. "This is my get-rich-quick scheme. I'm now suing you guys because I feel uncomfortable. And by the way, that's what happens in the world. Like, I can play along — I can be fine — then I can decide randomly, uh oh, you now have crossed the line. Even though I've been going with it."

In a campaign marred by a mounting number of sexist scandals, other members of the Trump family have espoused similar views on women in the workforce.

In an interview with USA Today about Roger Ailes' alleged sexual harassment at Fox, Trump was asked what would happen if "someone had treated Ivanka in the way Ailes allegedly behaved."

"I would like to think she would find another career or find another company if that was the case," Trump answered — an implicit suggestion that women are responsible for preventing their own sexual harassment.

Another of Trump's sons, Eric Trump, doubled down on the victim-blaming rhetoric, telling CBS This Morning, "Ivanka is a strong, powerful woman. She wouldn't allow herself to be, you know, objected to it."

Newsflash, Trump family: Whether they're closing billion-dollar deals or teaching kindergarten, women have the right to work without any expectation of sexual harassment. It's how equality works — and it's also the law.