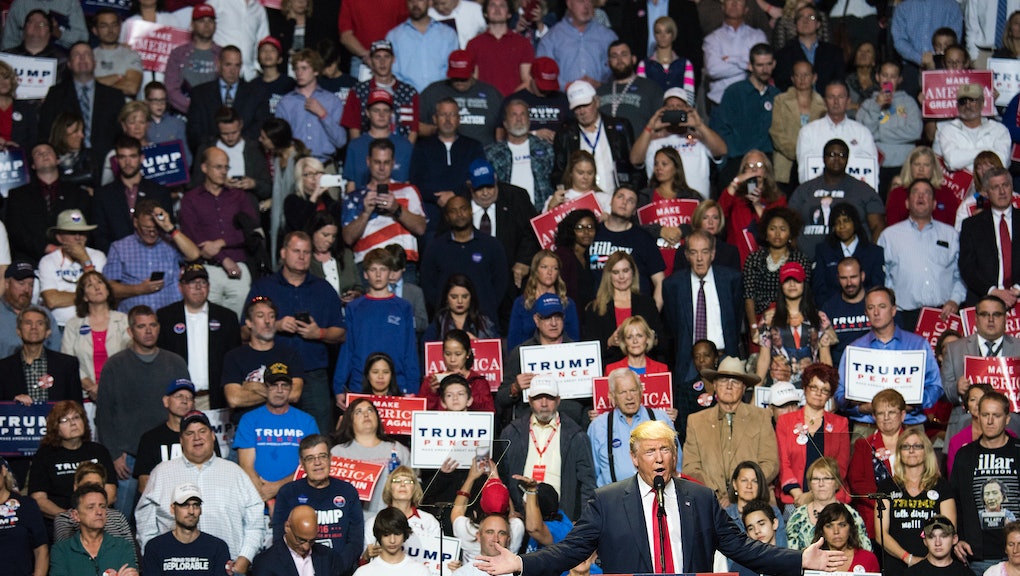 I want a divided America

"We have a very divided nation," he said. "We have a divided nation because people like her" — he pointed at Hillary Clinton for effect — "and believe me: She has tremendous hate in her heart."

In this election, as in others past, calling the other candidate "divisive" is a go-to insult. George W. Bush famously described himself as "a uniter, not a divider" during his first presidential primary campaign. Mitt Romney condemned President Barack Obama in similar terms when he ran against him in 2012.

"Mr. President, take your campaign of division and anger and hate back to Chicago," he said during a campaign stop in Ohio.

To be divisive, the logic goes, is to be incapable of getting Americans on the same page so you can lead them. It is an impediment to progress, which relies on the ideal that we remain — even against steep odds — "one nation ... indivisible."

But there's a stark difference between coexisting and governing collaboratively with ideological opponents and indulging people whose views are toxic to democracy. Between 40 and 50% of Trump supporters think black people are lazier or more violent than white people, according to a Reuters/Ipsos opinion poll. Almost 70% hold unfavorable views about American Muslims and almost 60% believe Obama was not born in the U.S.

Rarely in a modern U.S. presidential election have the lines between right, wrong, tolerable and intolerable been so clear as they are today.

Yet the country has spent much of the last year indulging Trump's supporters and their enablers, engaging them and trying to understand the roots of their grievances. This is a mistake. What we should be doing is condemning them, alienating them and shaming them out of public life. We should very much want to be divided from these people. Divisive, in 2016, is good.

In September, Clinton made the mistake of telling the truth about Trump's base.

"To just be grossly generalistic, you can put half of Trump supporters into what I call the basket of deplorables," she said at a fundraiser in Manhattan on Sept. 9. "Racist, sexist, homophobic, xenophobic, Islamaphobic — you name it."

Politicos framed Clinton's statement as a gaffe. But as Ta-Nehisi Coates wrote for the Atlantic the following week, reporters and pundits seemed more interested in how her words might affect the horse race than whether what she said was true.

"When Hillary Clinton claims that half of Trump's supporters qualify as 'racist, sexist, homophobic, xenophobic, Islamophobic,' data is on her side," he wrote.

After eight years of an Obama presidency built on the promise of national unity — and 24 years after Clinton's husband, Bill, won the White House by running as a Democrat who could reach comfortably across the aisle — it was remarkable to see the Democratic nominee torch the whole "unity" thing and dismiss half of her opponent's supporters as bigots.

But history will vindicate Clinton.

Here's whom her "basket of deplorables" includes: Kathy Miller, the former chair of Trump's Mahoning County, Ohio, campaign, who, despite an abundance of easily searchable evidence to the contrary, insists that racial inequality persists because black people are lazy and that there wasn't "any racism until Obama got elected."

"If you're black and you haven't been successful in the last 50 years, it's your own fault," she told the Guardian in September. "You've had every opportunity, it was given to you. ... You've had the same schools everybody else went to. You had benefits to go to college that white kids didn't have. You had all the advantages and didn't take advantage of it."

We should want to be divided from Kathy Miller.

It includes Rudy Giuliani, the former mayor of New York City, who insists that Black Lives Matter is an "inherently racist" movement because it divides people into racial categories. He then turns around and says black people shouldn't complain about police officers killing them because of "black on black crime."

We should want to be divided from Rudy Giuliani.

It includes supporters of the "Blue Lives Matter" movement, whose responses to black-led protests against police violence have consisted of defending bad police — including greeting three of the Baltimore officers charged in the April 2015 death of Freddie Gray with a standing ovation at the conservative Media Research Center's gala in September — and resorting to mental gymnastics to justify alarming rates of black death at the hands of law enforcement.

We should want to be divided from these people.

Perhaps most of all, it includes the cowardly Republican establishment, whose decades-long Southern Strategy has helped weaponize white supremacy into a political force, and today supplements its own violent policies toward poor, LGBTQ and other marginalized people by handing the GOP baton to a man who wants to ban Muslims from entering the United States, brags about sexually assaulting women and plans to build a wall to keep out Mexicans and Central American refugee children — a policy that is now included in the GOP platform.

We should want to be divided from these people. Trump's supporters have made a habit of spouting violent, hateful rhetoric, then decrying their critics' "divisiveness" and racially specific language. This includes the inexplicably still-controversial "Black Lives Matter" — a term that has sparked an uproar among conservatives and repeated retorts that "All Lives Matter."

They claim they want unity. But people who want unity work for it. They listen. They compromise. They show empathy for those who are suffering. What these people want is to not be bothered with disunity. They want us to suffer in silence, for us to indulge their bigotry and to live in a world where their prejudices can thrive unchallenged.

There are costs to ostracizing such people, of course. Trump supporters make up a large segment of the U.S. population. They are many of our parents, aunts, uncles, cousins and siblings — and for politicians, they're a large voting bloc who can't be easily ignored. As a result, we are conditioned to want to make nice with them, and to aim for a political discourse where we can coexist without enmity.

But the reality is this: If our goal is to be a just and moral United States of America, we need to stop negotiating with bigots. It's as simple as that.

Progressives have spent tons of energy this election trying to humanize and understand Trump supporters. The conservative whites who constitute the largest portion of Trump's base may be disaffected due to uncertainty about the future and political marginalization, whether perceived or real. These grievances should be heard. But rather than address them in good faith, the GOP has sought to politicize white anger by appealing to racism, turning it against black "welfare queens," Muslims and "illegal aliens" from Latin America who they claim are stealing jobs, committing crimes and mooching off the system.

The bigotry espoused by this conservative coalition cannot and must not be tolerated. Trump voters feel marginalized? That's unfortunate. But marginalization is the defining condition under which every other racial minority has existed in this country for hundreds of years. Marginalization we can solve, and even solve together. But not until the Republican nominee, his supporters and the vast swaths of Americans and their enablers who've precipitated Trump's rise relinquish their bigoted views.

Until then, we must not compromise with them. We must not meet them halfway. We cannot afford to entertain their bigotry and foot-dragging if we're serious about equality in the United States. Their views are incompatible with an equitable American future. We should fight to be divided from them. It's the only way forward.