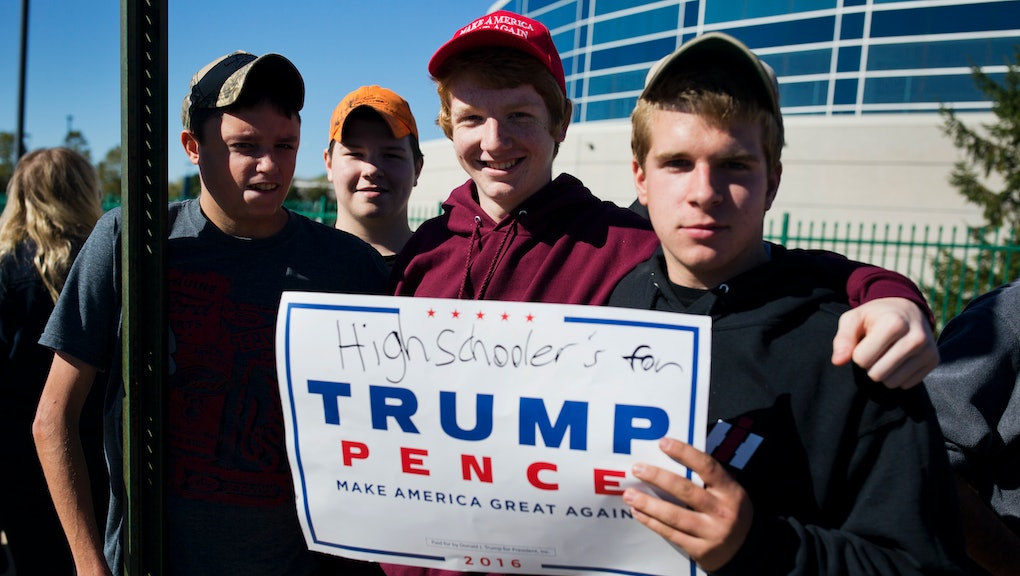 Everyone's talking to their daughters about Donald Trump. They need to talk to their sons.

On Oct. 7, news broke that Republican presidential nominee Donald Trump once said that his celebrity status gave him license to grab women by the — well, you know.

In the wake of his comments, Trump defended his statements by calling it "locker room banter" and multiple women have come forward with sexual assault allegations against him. Then on Thursday, first lady Michelle Obama spoke at a rally in New Hampshire about how Trump's comments affect the nation's children.

"And how is this affecting men and boys in this country?" Obama asked. "Because I can tell you that the men in my life do not talk about women like this and I know that my family is not unusual. And to dismiss this as everyday 'locker room talk' is an insult to decent men everywhere."

In that speech, she continued a conversation that advocates of ending rape culture have been talking about for years: Ending sexual assault starts with talking to young men about their role in preventing rape.

After Trump's comments were made public, Jennifer Avril, 45, of Brooklyn, New York, said she had a conversation with her 11-year-old son about what Trump said.

"So, what [Trump]'s saying is, it's OK to rape?" her son said when she sat him down and repeated Trump's words.

Avril said in a phone interview that she and her husband have had an ongoing conversation about consent with their son, a conversation they've calibrated depending on his age.

"We've said kissing and touching is pleasurable and something you're going to want to do and it's important that everybody wants to be doing what you're doing," Avril said. "You want to communicate about what feels good to each person and you don't push anyone past what they want to do."

That Avril is speaking to her young son about rape culture is a step in the right direction, according to Colleen Daly, director of media and strategic communications for End Rape on Campus. She said that framing rape as an issue that involves people of all genders is the only way to prevent rape culture.

"Women shouldn't have to fix this issue alone," Daly said in a phone interview. "We've been told how to fix this over and over and over in a way that puts the blame on us and it's time for men to be an active part of this conversation."

Daly pointed to one advance in consent education that's doing just that. In 2015, California became the first state to require high school consent education. The best part of the state's program, according to Daly, is that it ditches the "no means no" model, which puts the onus on women speaking up to prevent rape and supports the "yes means yes" model.

"The perpetuation of rape culture happens from a very early age and the onus is continually put on women to prevent rape culture or to prevent these attacks, rather than putting the onus on men to respect people's bodily autonomy," Daly said in a phone interview. "We see this on the playground when we tell girls, 'He hit you because he likes you.'"

But, Daly said, age-appropriate dialogues about consent don't have to be shackled to sex. Those conversations can range from telling children to ask whether they can hug another person, play with someone else's toy or telling someone that it's time to stop playing "tickle monster" when another person asks them to stop.

Wagatwe Wanjuki, co-founder of Survivors Eradicating Rape Culture, said in an interview that these conversations must be multilayered. Parents should talk about respect and bodily autonomy with children before conversations about sex.

"If we instill the concept of respecting people's boundaries and what people want to do with their bodies, we're able to create a necessary foundation where it's a natural belief that we should be respecting one another," she said. "It's not just about preventing 'being a rapist,' it's about respecting people in every aspect of life."