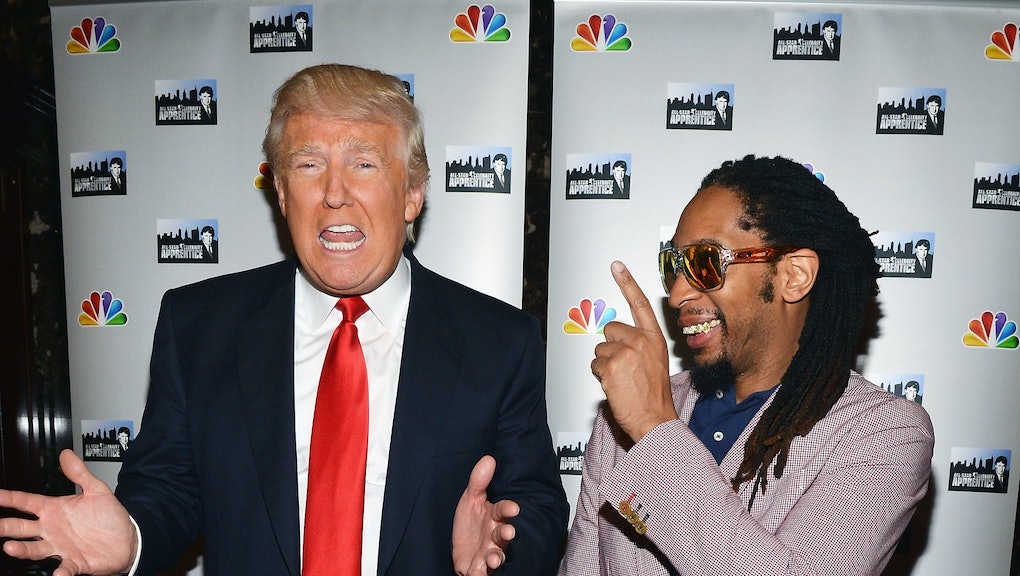 According to producers of NBC's All-Star Celebrity Apprentice, behind the scenes of the reality show was much more dramatic than what was broadcasted for the country to see.

Three staffers from the show told the Daily Beast that Trump repeatedly used the racial slur "Uncle Tom" to refer to rapper Lil Jon while shooting the show's 13th season. Several producers urged Trump to stop, but he continued unabated.

In one episode, Lil Jon and other contestants were tasked with selling hair-care products, and the rapper put on an Uncle Sam costume to help advertise. When Trump caught wind of the marketing stunt, he began calling the rapper "Uncle Tom" instead of Uncle Sam.

"Look, he's Uncle Tom!" one Celebrity Apprentice staffer recalled Trump saying at least twice, according to the Daily Beast. The staffer also said Trump was "tone-deaf" to the history of the term, which is usually an epithet used inside the black community to refer to black people who act subservient to white people.

According to the Beast, several producers tried to get Trump to stop, especially after comedian Arsenio Hall, who guest starred on the episode, had heard Trump make the remarks and was not pleased.

"We kept trying to explain to [Trump] that that's not a word you can use, that it's offensive," another employee told the Daily Beast.  "One of the executive producers had to call him up directly to [plead with] him not to say it, and Trump was like, 'No, that's a saying, it's Uncle Tom.' There are several takes in the footage of the dailies that has him trying to figure out the difference between 'Uncle Tom' and Uncle Sam. He just couldn't grasp that it was offensive... When [Trump] decides he wants to do something, that's his way."

Rapper Lil Jon confirmed the story in a tweet he sent out Friday evening. In the tweet, he said Trump stopped using the term once he and other castmates told him it was offensive.  Meanwhile, Trump's spokesperson emailed the Daily Beast to call the allegations "simply untrue."

Trump has little support among black voters, with a September ABC News/Washington Post poll showing only 3% support from black voters for the man who defended racist practices like stop and frisk.